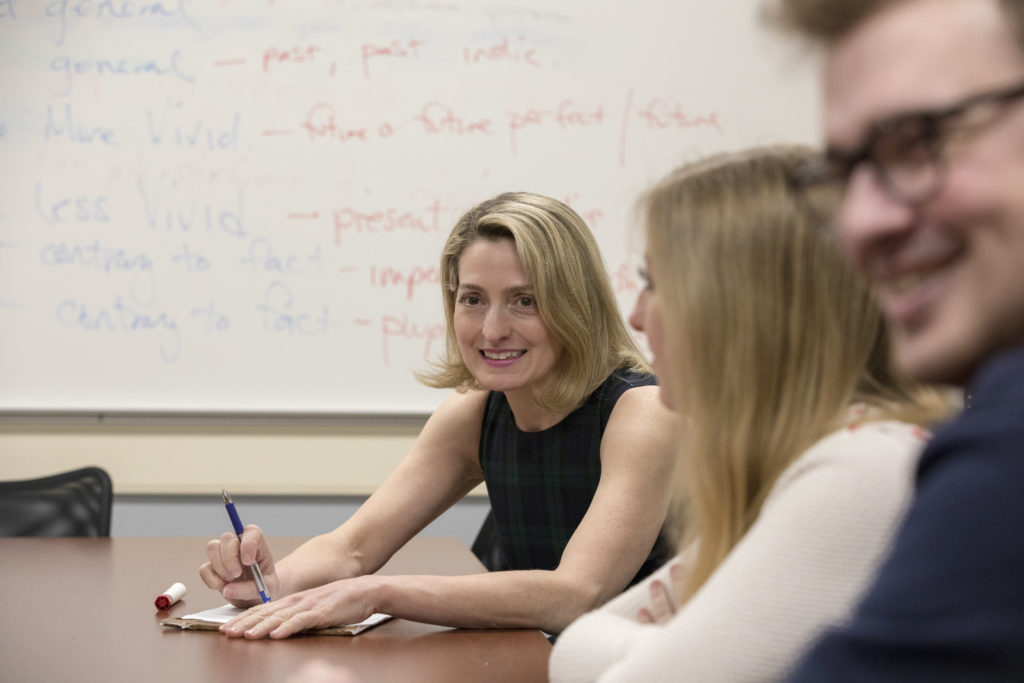 Assistant Professor of Classics
Franklin College of Arts and Sciences

From textbooks to dining to online pedagogy and coursework, Christine Albright evokes the ancient Mediterranean world to impart a sense of wonder and a love for language. Her teaching blends innovation with tradition and extends learning opportunities far beyond campus.

She is a national leader in using the immersive “Reacting to the Past” method in both language and culture courses to simulate the events after the assassination of Julius Caesar.

This historical simulation thrusts students into the role of Roman senators—bound by the laws and traditions of their society—as they attempt to figure out what to do next after this extraordinary event.

“A student wins the game by accomplishing a personal objective that could be advanced by giving weekly speeches given partially in Latin,” said former student Kate Rascoe. “Not only did this provide self-motivation for learning and staying on top of our composition, it allowed students to support and bond with one another.”

Albright has worked closely with the Center for Teaching and Learning as a Teaching Academy Fellow. She was named an Online Learning Fellow for the development of elementary Latin into a summer online course open to students throughout the University System of Georgia, one of the few for-credit online Latin courses available.

Her research on classics pedagogy includes “Ovid’s Metamorphoses: Stories for Students in Elementary College Latin,” a modernization of the Metamorphoses of the Roman poet Ovid. The text is poised to become standard for elementary Latin classes throughout the U.S., Canada and the United Kingdom.

Working with graduate students, Albright organizes and produces a feast for about 200 Latin and Greek students, who dine on dishes from ancient cookbooks and entertain each other with contests, recitations and a scavenger hunt that highlights UGA’s classical heritage and the interdisciplinary nature of the field of classics.

Albright also was the driving force behind ­Homerathon, a two-day performance of the poetry of Homer that began as an activity designed for students to demonstrate the idea that the “Iliad” and the “Odyssey” were not texts written by a unique author, but a result of many centuries of oral improvisation before large, public audiences.

The performance that emerged took place in front of the main library on North Campus, with a diverse group of readers.

“The result was an impressive affirmation of support for the humanities from the entire community and a lesson to the several thousand students who stopped to listen over the course of the performance,” said Charles Platter, classics professor and department head. 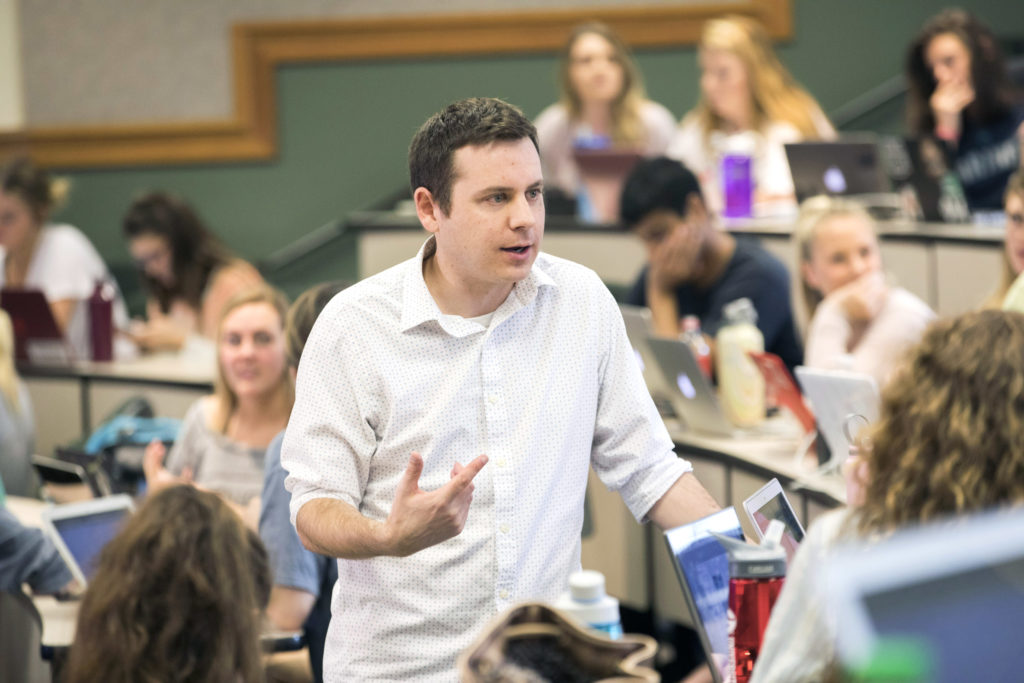 The old adage “That’s the way we’ve always done it” is not part of Michael Cacciatore’s philosophy.

Instead, he thrives on constantly tweaking his curriculum to bring current, relevant examples to his classes while engaging and connecting with his students. This is no easy task considering that he teaches Introduction to Public Relations, which has nearly 300 students this semester, and Public Relations Research, a smaller class averaging about 40 students. Cacciatore also has restructured the curriculum for his large lecture class, placing an increased emphasis on writing, based on feedback received from industry professionals.

“Dr. Cacciatore has a commitment to assuring that student engagement is maintained through interaction within the classroom, through engagement with current issues and practices within the industry and with his own keen intellectual interest in the intersection of teaching and scholarship,” said Charles N. Davis, dean of Grady College.

Cacciatore is always thinking about what is best for his students, whether it is coming in on a Saturday to catch up with them on concepts or accepting a fellowship to spend time in the field and bring real-world applications back to his class. He assumed additional teaching responsibilities when another faculty member fell ill and added a Maymester course to help students who needed the class to graduate.

Cacciatore credits his teaching drive to his colleagues at Grady College.

“If it wasn’t for the kind of people who I see around me doing it right, and the emphasis that was placed on teaching when I interviewed here, I wouldn’t be receiving an award like this,” he said.

The respect is mutual.

He has been a faculty member at Grady College since 2013, and during that short time, he has won Teacher of the Year honors, based on a faculty vote, three times. In addition to his ability to engage students, Cacciatore is adept at making his students energized about a class like Public Relations Research that may seem daunting at the beginning. He does this by relating core concepts to everyday topics.

In addition to the education, it is Cacciatore’s character and ability to connect that earn him praise from current and former students.

Leila Knox, a former student, said, “Professor Cacciatore has an unparalleled commitment to his students’ learning. His distinct teaching style incorporates different learning methods so that every single student has the opportunity to excel.”

Former student Skyler Horne summed up feelings that many students share: “Professor Cacciatore is a great educator. He already has won this award in the hearts and minds of his students.” 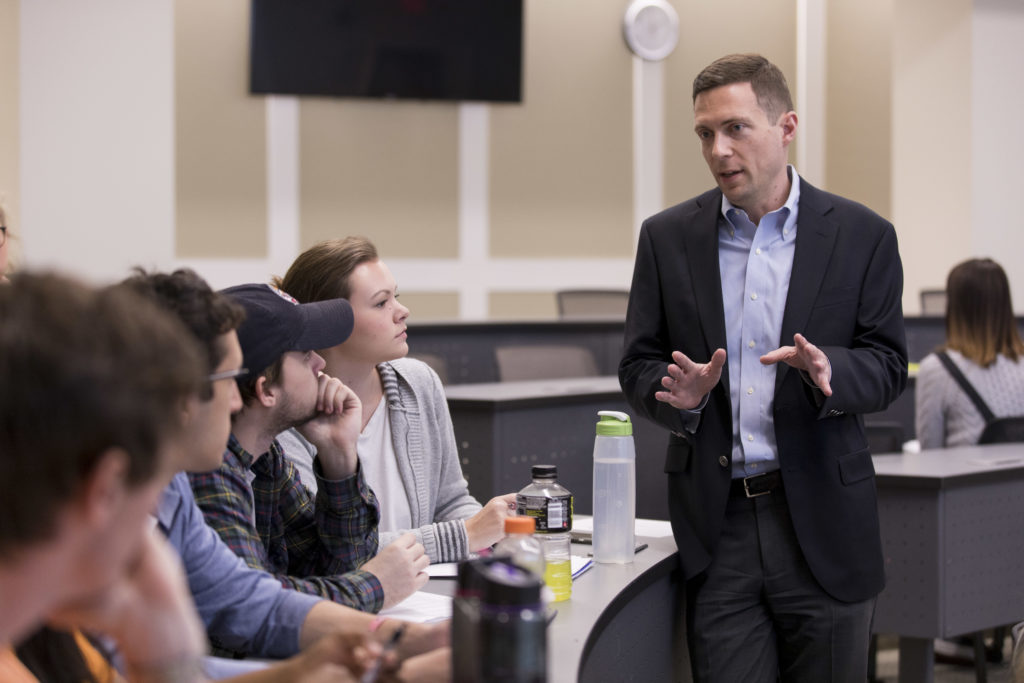 To engage students in learning about the law, Alex Reed uses real-life examples and role-play simulations to help them understand new concepts.

Since joining the UGA faculty in 2010, Reed has revised and updated his lesson plans continuously to foster student learning. For example, in his Legal and Regulatory Environment of Business course, he monitors media to identify timely, real-world examples of the concepts being covered in class. He believes the open-ended nature of these examples encourage critical thinking because students are less concerned with identifying “right” answers and avoiding “wrong” answers than they are with analyzing and exploring the relevant legal concepts.

In 2015, Reed attended a Harvard Program on Negotiation workshop at Harvard Law School. He found the Harvard workshop beneficial and to administer these simulations, he rescheduled his Negotiation and Alternative Dispute Resolution Systems course into a single two-and-a-half-hour class that affords students sufficient time to engage with the materials and with one another.

Reed is a member of the university’s Program Review and Assessment Committee. He has been the director of the Legal Studies Certificate Program, which he helped create, since July 2015. The program currently has approximately 300 students pursuing the certificate, with more than 300 students having already completed the program. He has been the department representative for the Specialty Certificate Programs Committee for the business college since January 2014.

In 2017, Reed received the college’s Teaching Excellence Award and in 2012, he was awarded the Outstanding Teaching Faculty Award from the insurance, legal studies and real estate department.

During his time at UGA, Reed has written 10 refereed journal articles for academic publications, including the Harvard Journal on Legislation.

A UGA alumnus, Reed received a bachelor’s degree in real estate in 2003 and his Juris Doctor from the School of Law in 2006. Before joining UGA, he was an associate attorney with Alston & Bird LLP in Atlanta.

“Alex is precisely the type of professor we strive to create here at UGA. He is absolutely dedicated to his subject matter and to bringing to his students the best educational experience he can give them in their law courses,” said Dawn D. Bennett-Alexander, associate professor of employment law and legal studies. “In all things teaching, Alex has been exemplary. He expects the best from his students, takes seriously the fact that we are the flagship university of the state and are responsible for those we teach being the best, and in so doing, brings out the best in them.”