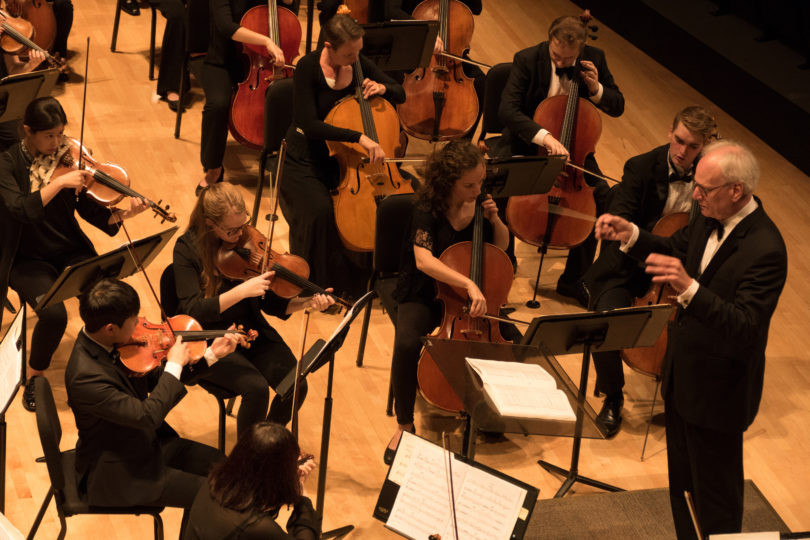 The University of Georgia Symphony Orchestra opens its season with a concert at 7:30 p.m. on Sept. 5.

The University of Georgia’s Symphony Orchestra, the Hugh Hodgson School of Music’s premier orchestra ensemble, will begin the new season with a performance on the newly renovated Hodgson Hall stage.

Students will take their chairs to perform a challenging repertoire on Sept. 5 at 7:30 p.m. in the opening concert of the 2019-2020 Thursday Scholarship Series season.

The concert will open with what has been recorded as the first “concert waltz.” The music reflects the first meeting of a boy and girl at a dance, with an opening cello solo demonstrating the boy’s polite introduction. The piece was written for piano by German composer Carl Maria von Weber and orchestrated by Hector Berlioz in 1841.

Joining the UGA Symphony Orchestra on Debussy’s Nocturnes will be the women of the Hodgson Singers, directed by Daniel Bara, director of choral activities and the John D. Boyd UGA Foundation Professor of Choral Music. Debussy, considered to be the first impressionist composer, described the piece as “an experiment in the different combinations that can be obtained from one color.” The three movements reflect his varied interpretations, and the wordless female chorus in the third movement adds to the ambiance.

After intermission, the orchestra will perform Russian composer Shostakovich’s “Symphony No. 5 in D minor, Op. 47.” In a time of stringent intellectual censorship, the young composer faced much resistance with former pieces, but was able to make a comeback with his energetic and dramatic Fifth Symphony.

“This will be a program of great musical atmosphere and colors,” said Mark Cedel, director of orchestra. “Our first work musically tells the story of a young, shy couple at a ball. Then we can musically ‘see’ soft, floating clouds in the Debussy to the bombastic and powerful music of Shostakovich.”

Tickets are $20 for adults and $3 for students, and can be purchased online at pac.uga.edu, by calling 706-542-4400 or in person at the Performing Arts Center box office, located next door to the music school. Streaming will be available at music.uga.edu/live-streaming. All proceeds from ticket sales directly support student scholarships.