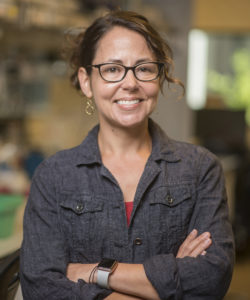 In her upcoming George H. Boyd Distinguished Lecture, to be held April 4 at 1 p.m. in the Georgia Center’s Masters Hall, UGA alumna and renowned evolutionary biologist Beth Shapiro will likely deliver a short, direct response to the implicit question raised by the title of her award-winning 2016 book, How to Clone a Mammoth: The Science of De-Extinction.

Her answer to the unspoken question? You don’t.

“It’s a topic that fascinates people—whether it’s possible to bring back these megafauna—and people get excited about bringing back big dinosaurs and woolly mammoths. Most people expect the book will make this great argument for why we should do this, when in fact it does the opposite,” said Shapiro, professor in the ecology and evolutionary biology department at the University of California, Santa Cruz. “My book argues that bringing back extinct species is both not possible and a terrible idea.”

Still, the 1999 Double Dawg (B.S. and M.S. in ecology) and MacArthur Foundation Fellowship (aka, “genius award”) recipient believes the technology behind “de-extinction” has tremendous potential. She simply believes scientists’ time will be much better spent exploring that potential for living species rather than dead ones.

Cloning a dinosaur or woolly mammoth is impossible, Shapiro says, because cloning technologies require DNA extracted from living or preserved cells. She said a group in Spain has employed the process of somatic cell transfer (the same technology behind the famous “Dolly” sheep clone) to clone the Pyrenean ibex, which went extinct only in 2000. Using cells that had been cryo-preserved with nitrogen, the team managed to produce a small number of individuals through birth, but those animals did not survive past infancy.

“We don’t have to argue about whether we can bring extinct species back to life—because we can’t—so let’s talk about what we can do,” said Shapiro.

The Boyd Distinguished Lecture Series, supported the Office of Research and the William S. and Elizabeth K. Boyd Foundation, brings national leaders and policymakers to UGA in science, education and related fields to discuss applications of research to contemporary issues in education. The lectures are free and open to all.