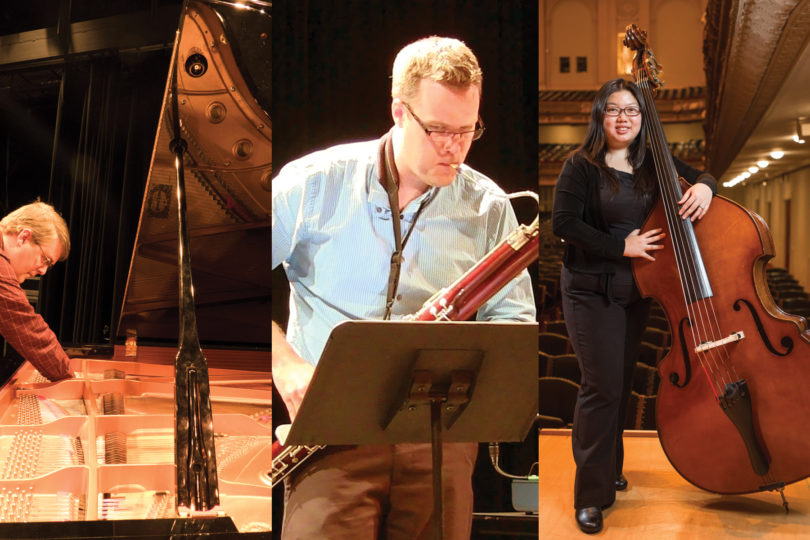 As a new year rings in, it is fitting to have a concert highlighting new musical works. The Hugh Hodgson School of Music’s composition faculty, along with many guest artists, will continue the Faculty Artist Series on Jan. 15 at 7:30 p.m. in Ramsey Concert Hall.

“From the very beginning, our conception of this faculty recital included the idea of writing new pieces for us to perform ourselves,” said Adrian Childs, the music composition and theory area chair at the Hodgson School of Music. The performance will feature the inaugural appearance of the Subaerial Collective, as well as three new works for their novel instrumentation, which will be premiered at the end of the recital.

“I think that attendees at the recital will be struck by the variety of voices and ideas coming from our composition faculty—the music is thought-provoking, meditative and fun in equal measure,” said Childs.

“Zetsu is a fictional character from Naruto with two different halves of his body—a black half and a white half.  To me, Zetsu personifies finality. With low and quick microtonal movement in the bass registers and tense harmonics in the mid-high registers, my work ‘zetsu’ is characterized by deep, inner conflicts and tension,” said Koh.

Another piece composed by Koh is based on the French lyric poem written by Charles Baudelaire from his highly controversial first edition of poems in 1857.

“[The piece] is a choral setting of Remorse of the Dead (Remords posthume) from The Flowers of Evil (Fleurs du mal). It is a beautiful setting on the surface, but the noir elements slowly seep out of the crevices to reach the final chord,” said Koh, assistant professor of composition. The VERITAS Vocal Ensemble, an eight-piece student choral ensemble, will be performing this piece.

Lane’s second piece of the program, /chatter/, was composed for Subaerial Collective and features “electronic elements in a short, fast-paced musical banter,” according to Lane.

The program also includes two world premieres written by Childs. His piece “Blues for Large Hands” is the first in a series of solo piano pieces that he’s written in honor and memory of his composition teachers.

“[Their music] engaged idiosyncratically with elements of jazz. I have drawn these memories and influences together into a piece that is mostly notated, but also includes some improvisation,” he said.

Speaking to the name of their new trio, Subaerial Collective, Childs realized that “Bonobo Assassin,” a name they had formerly considered for the trio, would work well as the title for the piece he was writing. “Like its title, the piece involves two ideas that don’t seem to belong together—a dry, driving line and some ethereal chords—whose combination comes across as serious, but is also a bit ridiculous,” he said.

Tickets for the concert are $12 for adults and $6 for students and children and can be purchased online at pac.uga.edu or by calling the Performing Arts Center Box Office at 706-542-4400. All proceeds from ticket sales go directly towards funding student scholarships. For those unable to attend the concert, live streaming will be available at music.uga.edu/live-streaming.