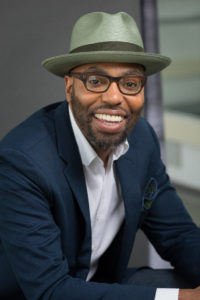 His lecture, “Teaching and Learning from the Students’ Standpoint,” is open free to the public with a reception to follow.

Emdin is an associate professor in the mathematics, science and technology department in Teachers College at Columbia University. He also serves as director of the science ­­ ­education program and associate director of Columbia’s Institute for Urban and Minority ­Education.

Emdin’s goal as creator of the #HipHopEd initiative is to inform stakeholders in education and related fields about the intersections of hip-hop and learning. Originally an online Twitter chat where educators discussed larger themes related to hip-hop and education, #HipHopEd has grown into a nonprofit organization that focuses on conferences, curriculum, professional development, training and youth development.

Emdin writes on his experiences as a student, teacher, administrator and researcher in urban schools and the deep relationship between hip-hop culture and science that he discovered at every stage of his academic and professional journey. He is the author of two books: the New York Times bestseller For White Folks Who Teach in the Hood… and the Rest of Y’all Too and Urban Science Education for the Hip-Hop Generation.

Emdin holds a Ph.D. in urban education with a concentration in mathematics, science, and technology from the Graduate Center of the City University of New York; a master’s degree in natural sciences from Rensselaer Polytechnic Institute; and a bachelor’s degree in physical anthropology, biology and chemistry from Lehman College.

The Mary Frances Early Lecture honors the first African American to earn a degree from UGA and her legacy at the university. Early graduated with a master’s degree in music education in 1962 and completed her specialist in education degree in 1967.

The lecture series recognizes Early’s dedication toward making UGA an institution of higher learning for all people. It also strives to demonstrate the progress that has been made in achieving her vision as well as to identify the work that remains to be done.

The Mary Frances Early Lecture is sponsored by the Graduate School, Graduate and Professional Scholars and the Office of Institutional Diversity.