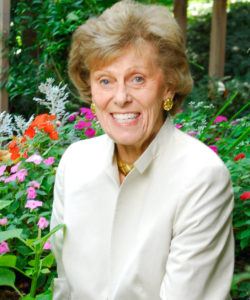 Alana Shepherd, co-founder of Shepherd Center, will deliver the University of Georgia’s Mason Public Leadership Lecture Feb. 19 at 2 p.m. in the UGA Chapel.

She and her family co-founded Shepherd Center in 1975 in Atlanta to treat spinal-cord injury. Since then, the center has grown from a six-bed unit to a world-renowned, 152-bed rehabilitation hospital specializing in medical treatment, research and rehabilitation for people with spinal-cord injuries, brain injuries and other neurological conditions.

The Mason Public Leadership Lecture is supported by a grant from Keith Mason, an alumnus of UGA’s Terry College of Business and School of Law who serves as principal for KWM Capital Management in Atlanta. The lecture features prominent business leaders who have contributed significantly to their communities or spent time in a public service role.

“On behalf of the University of Georgia, I want to thank Keith Mason for his continued support of this valuable lecture series, which helps to provide a world-class learning environment for our students,” said UGA President Jere W. Morehead. “We are excited to welcome Alana Shepherd, and we look forward to learning from her insights on leadership and public service.”

Alana, with her husband Harold and son James, founded Shepherd Center after James sustained a paralyzing spinal-cord injury in 1973. Frustrated by the lack of state-of-the-art rehabilitation care in the Southeast, the family galvanized support to open a specialty facility.

Alana also recognized the need to change the community to which patients would return so they would be accepted and able to resume their lives. Her advocacy for accessibility resulted in the addition of lifts to the MARTA bus system and in making Hartsfield-Jackson Atlanta International Airport one of the country’s most accessible.

“Alana Shepherd’s life work demonstrates how a pioneering spirit and a fierce commitment to public service can effect positive change,” said Terry College Dean Benjamin C. Ayers. “Her efforts to ensure the best care for spinal injury patients, by both the medical community and society at large, are truly inspiring. I am thrilled that our students will have the opportunity to benefit from her wisdom and example.”

For their contributions to health care and the state of Georgia, Alana, Harold and James Shepherd were awarded honorary degrees by UGA in 2011. Among her many other accolades, Alana received the 2012 J.W. Fanning Award and the Georgia Hospital Association’s 2009 Lifetime Heroic Achievement Award.