Emily Bernhardt, the Jerry G. and Patricia Crawford Hubbard Professor of Biology in the Nicholas School of the Environment at Duke University, will deliver the 34th annual Odum Lecture at the University of Georgia Odum School of Ecology.

Her talk, “Do rivers have rhythm? Taking the pulse of freshwater ecosystems,” will take place March 19 at 3:30 p.m. in the auditorium of the Odum School. The lecture, which is open free to the public, will be followed by a reception. 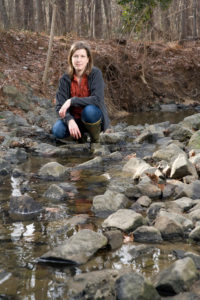 Duke University professor Emily Bernhardt will deliver the university’s 34th annual Odum Lecture March 19 at 3:30 p.m. in the auditorium of the Odum School of Ecology.

Bernhardt is an ecosystem ecologist and biogeochemist focused on how human activities alter the structure and function of aquatic ecosystems. Her research includes studying the effects of saltwater intrusion on the ecosystems and communities of the North Carolina coast, how development influences the way stormwater and the contaminants it carries affect urban streams and the environmental impacts of mountaintop removal mining in the Appalachians.

The subject of her talk is the StreamPULSE project, which focuses on how the rates and patterns of stream metabolism vary within and across streams. Funded by a macrosystems grant from the National Science Foundation for which she serves as lead principal investigator, the StreamPULSE project is a collaboration among scientists from seven universities and the U.S. Geological Survey. It includes study sites from New England to Puerto Rico, as well as Wisconsin and Arizona. The goal of the project is to measure and analyze concentrations of oxygen and carbon dioxide in these streams over daily, seasonal and annual scales to understand the patterns of their pulses across space and time.

Bernhardt is an elected Fellow of the Ecological Society of America. She is the recipient of a CAREER Award for New Investigators from the NSF and served as president of the Society for Freshwater Science from 2016-2017. She is the author, with previous Odum lecturer William Schlesinger, of Biogeochemistry: An analysis of global change, and has published more than 150 peer-reviewed papers.

“Professor Bernhardt’s work is extraordinary, showing that ecosystems are the heartbeat of how and why climate change is profoundly altering our ecological world,” said John Gittleman, UGA Foundation Professor in Ecology and dean of the Odum School. “It is an honor to host Professor Bernhardt to deliver the prestigious Odum Lecture.”

Honoring the founder of the Odum School of Ecology, the annual Eugene P. Odum Lecture Series features speakers who address significant ecological questions in broad social and intellectual contexts. Previous Odum lectures have been delivered by pre-eminent scholars, more than half of whom have been members of the National Academy of Sciences or Royal Society Fellows.