Comparable to a distinguished professorship, the Walter Barnard Hill Fellow Award for Distinguished Achievement in Public Service and Outreach is UGA’s highest award in public service and outreach. 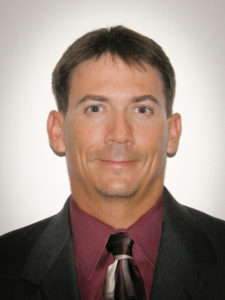 Stanley Culpepper is a professor and Cooperative Extension agronomist in the College of Agricultural and Environmental Sciences. Since coming to UGA in 1999, Culpepper has been on the cutting edge of agriculture, research and extension, discovering new ways to help farmers feed and clothe the world.

One challenge facing farmers is glyphosate-resistant Palmer amaranth, the most devastating weed in the history of U.S. agriculture. Culpepper was the first to confirm the pest in Georgia and find ways to effectively control it. Today, nearly all of Georgia’s cotton management programs have stemmed from Culpepper’s research in the management of this superweed.

Culpepper has made significant discoveries in replacing methyl bromide, a highly effective treatment against weeds and diseases that can enter the atmosphere and cause health problems in humans. He developed two alternative methods, both widely and rapidly adopted. For that effort,
Culpepper became the first person in Cooperative Extension and applied agriculture to win the prestigious, international Montreal Protocol Award, given to those who have contributed to the preservation of the ozone. 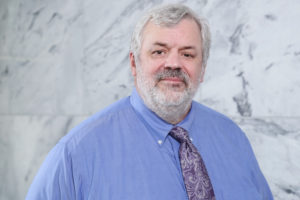 Alexander Scherr is an associate professor and director of the Veterans Legal Clinic at the University of Georgia School of Law. He has been a steadfast ambassador for clinical legal education at the School of Law for more than two decades, creating a profound impact on the breadth and scope of clinical and experiential learning opportunities at UGA.

Since joining the law school in 1996 as its first director of civil clinics, Scherr has been instrumental in the substantial growth of clinical and experiential course offerings—from three to 18, as of fall 2018. The expansion of these courses has led to a significant increase in student participation, growing from less than 35 percent of graduates in 1996 to nearly 90 percent in 2018.

Over the past two years, Scherr led a team of law school faculty, staff and administrators who expanded the available summer public interest fellowships from eight to 48, while also tripling the funds given to students.

Scherr’s focus on how lawyers can affect legal and social change, as well as his training of young lawyers to recognize and integrate that mindset into their own practices, has had an impact on the Athens area as well. The Public Interest Practicum course, which he ran from 1996 to 2016, provided counsel, advice and informal advocacy to low-income residents in the community. Through PIP, Scherr collaborated with the College of Family and Consumer Sciences in 2011, adding legal help to the college’s ASPIRE (Acquiring Strategies for Personal Improvement and Relationship Enhancement) Clinic, which offers holistic counseling and education services to UGA and the Athens community. His law students visit a variety of locations in the community and provide both legal advice and law-related education to people who could not normally afford lawyers.

“Engaged scholarship occurs ‘when research informs outreach, and outreach and teaching inform research.’ Nothing could more accurately describe Professor Scherr’s work,” said Peter Rutledge, dean and Herman E. Talmadge Chair of Law. “All portions of his work interconnect. His teaching, research and scholarship revolve around community issues and meeting the needs of Georgians. He routinely finds ways to engage students in answering the call to improve the lives of others.” 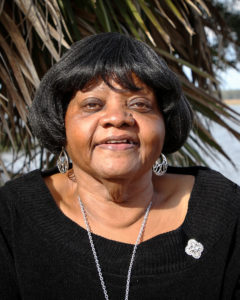 Genell Gibson has been a staple at the University of Georgia Marine Education Center and Aquarium in Savannah since 1994.

In her role as administrative assistant/Marine Education Center and Aquarium manager, she greets incoming visitors, manages fees and admission, maintains the education resource center and directs incoming calls and requests.

Gibson excels at all of her listed duties, but it is her other contributions that set her apart. During her 24 years as a member of Marine Extension and Sea Grant, she has transformed the role beyond its regular office-based duties, serving as a teacher, historian and friend to everyone who visits and works at the facility.

Born and raised in the Georgia community of Pin Point, Gibson picked blue crab for a living as a young adult, a skill she now shares with visitors in the Saturday Explorations at the Aquarium Programs.

Gibson also discusses her unique Gullah/Geechee heritage, providing people with a special perspective on the life, work and history of the Georgia coast.

Gibson serves as the face of the UGA Aquarium, where she is often the first person to interact with the more than 20,000 visitors each year. She acts as the intermediary between staff and visitors, exemplifying Marine Extension’s “each one, teach one” principle. Her role is critical to understanding how visitors view the facility and how to improve their experience.

“Genell Gibson is the heart and soul of the Marine Education Center and Aquarium,” said Mark Risse, director of Marine Extension and Sea Grant. “She teaches us daily what is means to be thoughtful, helpful and courteous humans. She reminds us all how fortunate we are to work and live on Georgia’s coast.

“Genell is our historian,” Risse also said. “She is our link to the human history of Skidaway Island during the Roebling era, our link to the long-retired workers who hail from her community of Pin Point, our link to oyster and crabbing culture, our link to the fine folk who love this coastal area and choose to live and work here.”

Five faculty members and service professionals are 2019 recipients of the Walter Barnard Hill Award for Distinguished Achievement in Public Service and Outreach. The award recognizes their contributions to the improvement of the quality of life in Georgia and beyond. 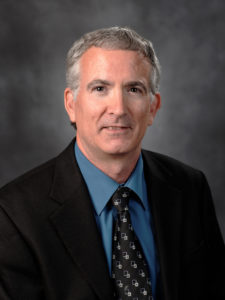 Jeffrey Humphreys is the director of the Selig Center for Economic Growth in the Terry College of Business. During his nearly 30-year career at UGA, Humphreys has been recognized as one of the foremost experts on the Georgia economy. His expertise and economic forecasting is sought after and utilized by countless private businesses, government officials and nonprofit organizations.

Humphreys was instrumental in growing Terry College’s Georgia Economic Outlook series across the state beginning in 1989, helping the program expand beyond Atlanta and ultimately reach 10 cities and more than 3,000 attendees each year. Humphreys’ research and analysis is at the core of the outlook series, which provides reliable insights regarding Georgia’s economic outlook for the coming year.

Humphreys has lent his expertise to numerous boards and governing bodies over the years, including as a member of the Athens Chamber of Commercial Small Business Council (1990-96), a board member on the Athens Convention & Visitors Bureau (1993-2003) and as an appointed member of the Governor’s Council of Economic Advisors since 2003. 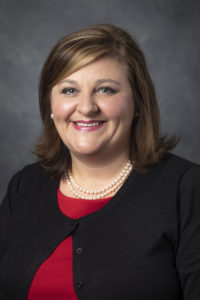 As an Extension 4-H specialist and senior public service associate in UGA Cooperative Extension, Mandy Burgess Marable is at the crux of Georgia 4-H’s relationship with school systems and the Georgia Department of Education. Marable has reached more than 1.6 million youths across the state through her various curricula, although her impact doesn’t stop at state lines. Marable serves as a National Peer Reviewer for the National 4-H Curriculum Database, among other national appointments, while regularly presenting and leading trainings across the country.

Marable spearheaded the Garden Earth Naturalist program, a partnership between the State Botanical Garden of Georgia, the Georgia Museum of Natural History and Georgia 4-H to help youth better understand and care for the Earth’s ecosystems.

In addition to promoting healthy ecosystems, Marable advocates healthy habits for youth through the Georgia 4-H and Health Rocks! Less Stress on the Test publication, which contains coping strategies for students to conquer high-stakes testing anxiety. 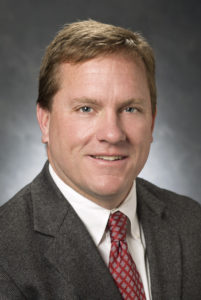 David Meyers is a public service associate at the J.W. Fanning Institute for Leadership Development. For two decades, Meyers has been instrumental in designing and implementing programming for youth currently or previously experiencing foster care or homelessness.

Meyers has leveraged partnerships with state agencies such as the Georgia Division of Family and Children Services to develop the statewide Embark Georgia network and Embark UGA program. Embark UGA consists of partnerships around UGA that provide a robust portfolio of resources to increase higher education access and retention among underrepresented youth facing homelessness. The program is now being replicated across all of the University System of Georgia and Technical College System of Georgia institutions.

Meyers also is an adjunct faculty member in the School of Social Work, where he teaches introductory undergraduate social work courses. In 2017, he was named UGA’s Bachelor of Social Work Teacher of the Year. Additionally, he mentors and is a field instructor for graduate-level social work students. 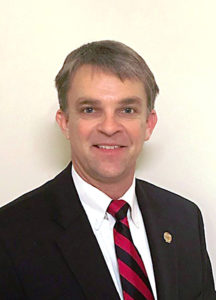 For the past 24 years, William G. Tyson has been providing leadership in southeast Georgia’s agricultural industry. He has made valuable contributions to the field of corn, cotton, peanut and soybean production while serving as the county extension coordinator and agricultural and natural resources agent of Bulloch County.

The major diseases affecting peanuts in Bulloch and Effingham counties are cylindrocladium black rot and white mold. For more than a decade, Tyson has studied the use of fungicide to combat these diseases, accumulating the most expansive collection of large on-farm white mold data in the region.

Asian soybean rust, a tropical disease creating tremendous waves of loss across the globe, was first observed in Georgia in Tyson’s region. Tyson worked with specialists and scientists in the area to create pilot plots of soybean—essentially serving as a warning system for farmers in the area on when to use fungicide. His efforts reached neighbors across the nearby South Carolina border; Clemson University and South Carolina Cooperative Extension collaborated with Tyson to create educational materials on the disease. 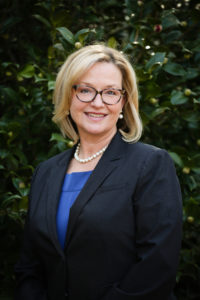 Theresa Wright is director of assessment and evaluation for the Office of the Vice President for Public Service and Outreach and the unit manager for the Carl Vinson Institute of Government’s Survey Research and Evaluation Initiative.

Wright has served as the principal investigator on more than 50 sponsored projects with nearly 20 clients, frequently working with state agencies and local governments to serve some of Georgia’s most vulnerable residents.

Wright served on the University System of Georgia’s Comprehensive Administration Review Committee. She also served as committee chair for the Public Service and Outreach Assessment and Evaluation Initiative, which led to her being named director of that initiative.

Some of Wright’s most notable contributions have come in the areas of juvenile and criminal justice, as well as early care and learning, where she led the evaluation team for the Georgia Criminal Justice Coordinating Council’s Juvenile Justice Incentive Grants and the Department of Juvenile Justice’s Community Services Grant programs.