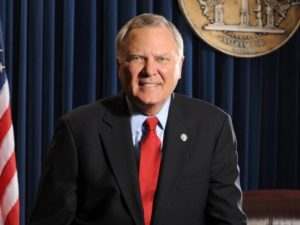 Former Georgia Gov. Nathan Deal will deliver the University of Georgia School of Law’s Commencement address May 18 in Stegeman Coliseum.

Deal served as the 82nd governor of Georgia from 2011 to 2019. Hallmarks of his two-term governorship include the Peach State being named the No. 1 state in the nation for business for six consecutive years and the creation of more than 800,000 private sector jobs. Notably, the state’s job growth outpaced the national average, while its population jumped from 10th to eighth nationally during this period.

After earning both his bachelor’s and law degrees from Mercer University, Deal—a Georgia native—served as a captain in the U.S. Army. He then entered private practice in Gainesville and began his career in public service, where he was a prosecutor, judge, state senator and U.S. congressman for Georgia’s 9th District before becoming governor.

Deal’s future plans include teaching and guest lecturing at universities and colleges ­throughout Georgia, including the University of Georgia.

“We are delighted to have Gov. Deal be a part of this milestone event for our students,” School of Law Dean Peter B. “Bo” Rutledge said. “The School of Law prides itself on being one of the best returns on investment in legal education by providing a first-rate legal education and connecting students to distinguished leaders as they prepare to be future leaders for our state and society.”

Just over 200 students will participate in the ceremony, including 185 Juris Doctor (J.D.), 14 Master of Laws (LL.M.) and three Master in the Study of Law (M.S.L.) candidates.

The event will start at 10 a.m., and the university’s Clear Bag Policy will be enforced.