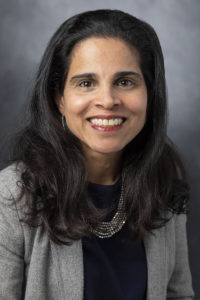 Usha R. Rodrigues has been named University Professor, an honor bestowed on faculty members who have made a significant impact on the University of Georgia beyond their normal academic responsibilities. Rodrigues has expanded curricular and experiential learning opportunities for students while also fostering a culture of women’s leadership at UGA and the broader academy.

Rodrigues, the M.E. Kilpatrick Chair of Corporate Finance and Securities Law, served as the associate dean for faculty development in the School of Law from 2015 to 2018 and has served as University Council’s parliamentarian since 2014.

Rodrigues led a dramatic expansion of business law-related offerings in the School of Law, and she worked in collaboration with the Terry College of Business to establish a three-year joint juris doctor/master’s in business administration program.

She played a role in establishing the Business Law Clinic, which gives students experience in legal services to small business owners and not-for-profit organizations.

In addition, she helped launch UGA’s Corsair Law Society, a student organization that bolsters networking, leadership and career readiness for students interested in transactional law or corporate litigation outside the state.

Rodrigues served as a leader in a faculty collaboration known as eHub that helped spur the development of UGA’s Entrepreneurship Program, and she currently sits on the program’s advisory board. She also chairs the board of Four Athens Inc., a nonprofit technology accelerator based in Athens.

She was a member of the inaugural class of the university’s Women’s Leadership Fellows Program and participated in a yearlong women’s leadership initiative at the Law School known as Georgia Women in Law Lead. She spearheaded the creation of a multi-school consortium of law schools dedicated to women’s leadership and in 2018 hosted the group’s inaugural conference.Rodrigues is a Fellow in the Southeastern Conference Academic Leadership Development Program and is a member of the American Law Institute.

University Professors receive a permanent salary increase of $10,000 and an annual academic support account of $5,000. Nominations from the deans of UGA’s schools and colleges are reviewed by a committee, which makes a recommendation to the provost. First awarded in 1974, the professorship is limited to no more than one faculty member per year.