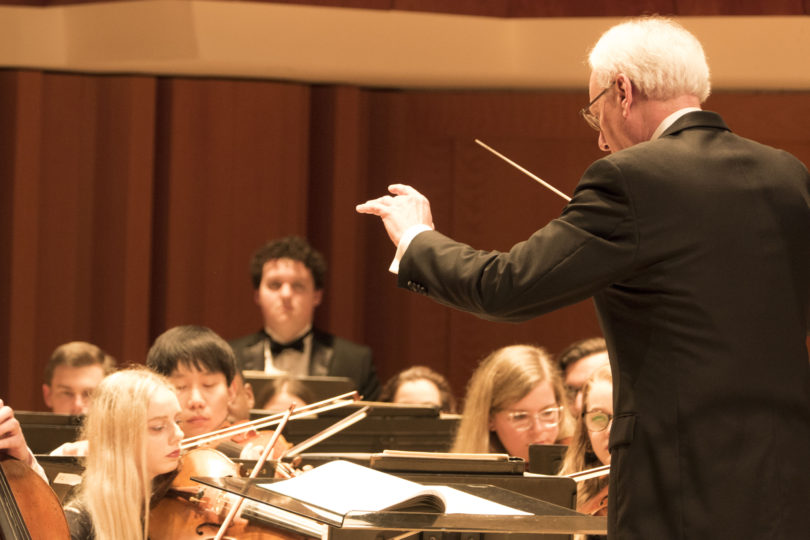 The annual Concerto Competition Concert will be held on Jan. 23 at 7:30 p.m. in Hodgson Hall. The concert is  a part of the Thursday Scholarship Series. Six Hugh Hodgson School of Music students will perform solos alongside the University of Georgia Symphony Orchestra.

The Concerto Competition is a longstanding tradition of the Hodgson School, where music students from all areas are selected choose, learn and perform a concerto for a faculty judging panel.

“What makes [the program] a challenge is you never know what the winning selections are going to be. It can make for some very challenging programming,” said Mark Cedel, director of the UGA Symphony Orchestra and one of the conductors of the Concerto Competition Program.

Three of the pieces will be conducted by Jean Góme, conducting assistant.

Zhang has performed on the violin throughout China and the U.S. and will be performing “Concerto for Violin, opus 47, D minor” by Jean Sibelius. Zhang is a graduate of the Shanghai Conservatory of Music and Schwob School of Music at Columbus State and now is working towards her DMA with Levon Ambartsumian, Franklin Professor of Violin.

Yoo was born in Gumi, South Korea. He holds a bachelor’s degree in music composition and two master’s degrees in composition and piano from Kent State University. Yoo has performed as a soloist with the Stow Symphony Orchestra, at the 2018 American Liszt Society festival and in Steinway Hall in New York City. He will be performing Brahms’ “Piano Concerto No 2, opus 83, B-flat major.”

Mozeik, currently earning her DMA in oboe performance under the mentorship of associate professor Reid Messich, is the second oboist in the Greenville Symphony Orchestra. Originally from Pittsburgh, Mozeik received her Bachelor of Music degree from the Cleveland Institute of Music and her Master of Music degree from the Shepherd School of Music at Rice University. For her concerto, she will perform “Concerto for Oboe, D major” by Strauss.

Li is a top prize winner of the University of Taipei Concerto Competition as well as the Taipei and Keelung National Music Competitions in her native Taiwan. In the U.S., she has won the Lee University Concerto Competition and most recently received top prizes in the 2019 Atlanta Music Club, Georgia Music Teacher Association and Osaka International competitions and will be performing “Piano Concerto No 3, opus 22, C major” by Prokofiev with the UGA Symphony Orchestra.

Tickets for the event are $20 for adults and $3 for students, and can be found online at pac.uga.edu. All proceeds directly benefit student scholarships. For more information, visit music.uga.edu. For more up to date information about concerts and other events at the School of Music, subscribe to the weekly email list. Those unable to make it to the concert can watch the live stream at music.uga.edu/live-streaming.