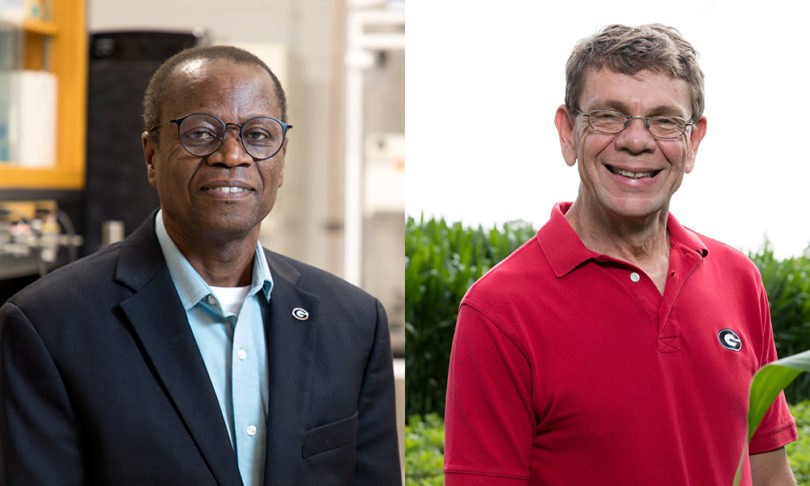 Two faculty members at the University of Georgia have been named University Professors, a title bestowed on those who have had a significant impact on the university in addition to fulfilling their normal academic responsibilities.

The 2019-2020 University Professors are William Kisaalita, Georgia Athletic Association Distinguished Professor of Engineering, and George Vellidis, professor in the department of crop and soil sciences in the College of Agricultural and Environmental Sciences.

“This year’s University Professors are international leaders in their fields and agents of change here at the University of Georgia,” said S. Jack Hu, the university’s senior vice president for academic affairs and provost. “They exemplify the dedication that our faculty have to this institution and its vital missions of teaching, research and service.”

Kisaalita’s research and innovation have had a global impact. To address the challenges many   farmers in rural Africa face due to a lack of electricity and a lack of means to keep collected milk cool, Kisaalita, a native of Uganda, and his team developed a wind and biogas-powered cooling device, the EvaKuula. This device serves as a way to maximize small farms’ dairy profits. This groundbreaking work does not stop with milk. Kisaalita’s team of researchers are now using the EvaKuula technology to create a cooling container for eggs.

Kisaalita has held many roles on campus, including chair for biological engineering, associate director of the Center for Undergraduate Research Opportunities and graduate coordinator for the biological and agricultural engineering department.

Kisaalita has been principal investigator or co-investigator for $15 million in external grant funding. He also has 101 publications and has founded three companies to commercialize technology developed in his laboratory.

Along with numerous university-level teaching awards, Kisaalita was recently named a Fellow of the American Association for the Advancement of Science. He is an active member of the African Studies Institute, as well as a founding member of the Nanoscale Science and Engineering Center, Biomedical and Health Sciences Institute and Regenerative Bioscience Center.

Vellidis’ research focuses on water resources and precision agriculture. He applies principles of engineering and the sciences to measure, model and manage the interaction between agricultural production systems and the environment. Vellidis is located at UGA’s Tifton campus, where he serves as director of academic affairs for the campus.

Fostering students to have a positive impact on Georgia has long been a goal of Vellidis. In 2001, he began conducting surveys and market research to determine if there was a demand for an undergraduate major at the Tifton campus, located 200 miles from UGA’s main campus in Athens.

His research showed that there was a significant demographic who wanted a degree from UGA but could not leave south Georgia for one reason or another. Vellidis was one of two leaders who helped establish the College of Agricultural and Environmental Sciences teaching program on the Tifton campus. Graduates of this program now populate many of the agricultural companies that provide precision agriculture and laboratory services in south Georgia. Vellidis was also one of the leaders who developed the Dual Master’s Degree in Sustainable Agriculture between UGA and the University of Padova in Italy. Eighteen graduate students have participated in this program since its inception in 2018.

“Dr. Vellidis’ career at UGA exemplifies the spirit of the University Professorship,” wrote Samuel Pardue, dean and director of the College of Agricultural and Environmental Sciences, in his nomination letter. “While at UGA, he has become an internationally recognized researcher in precision agriculture, but he has also contributed significantly to the university in many other ways.”

University Professors receive a permanent salary increase of $10,000 and a yearly academic support of $5,000. Nominations from the deans of UGA’s schools and colleges are reviewed by a committee, which makes a recommendation to the provost.