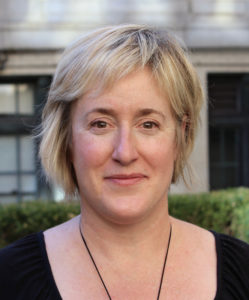 In recognition of the 2020 national Women’s History Month theme “Valiant Women of the Vote,” the Institute for Women’s Studies at the University of Georgia will be hosting numerous programs in March that honor the centennial of the 19th Amendment.

This year’s Women’s History Month keynote address will be presented by Lisa Tetrault, associate professor of history in the Dietrich College of Humanities and Social Sciences at Carnegie Mellon University. Tetrault specializes in the history of women and gender in the U.S., focusing on feminism and social movements, American democracy and the politics of memory. She is an active public historian and researches and lectures on the U.S. women’s suffrage movement, broadly construed.

Her lecture, “Women and the Right to Vote: A History Unfinished,” will take place on March 4 at 6:30 p.m. in Room 271 of the Richard B. Russell Building Special Collections Libraries. A reception sponsored by the Lucy Hargrett Draper Center and Archives for the Study of the Rights of Women in History and Law will immediately follow the lecture. The Hargrett Rare Book and Manuscript Library’s exhibition, The Strategies for Suffrage: Mobilizing a Nation for Women’s Rights, will be on display in the Hargrett Library Gallery before the lecture and during the reception.

The Institute for Women’s Studies will continue its tradition of hosting a film festival during March featuring documentaries and feature films highlighting the often-overlooked stories of women fighting against systemic and structural forces of discrimination, disenfranchisement and misrepresentation. This festival is co-sponsored by the Lucy Hargrett Draper Center and Archives for the Study of the Rights of Women in History and Law. All film screenings are free and open to the public and will take place at 6:30 p.m. in Room 271 of the Russell Special Collections Building.

This year’s film selections include Iron Jawed Angels on March 2; Ida B. Wells: A Passion for Justice on March 16; Standing on my Sisters’ Shoulders on March 23; and Golden Gate Girls on March 30.

A complete list of Women’s History Month programming at UGA is available online at http://iws.uga.edu/.