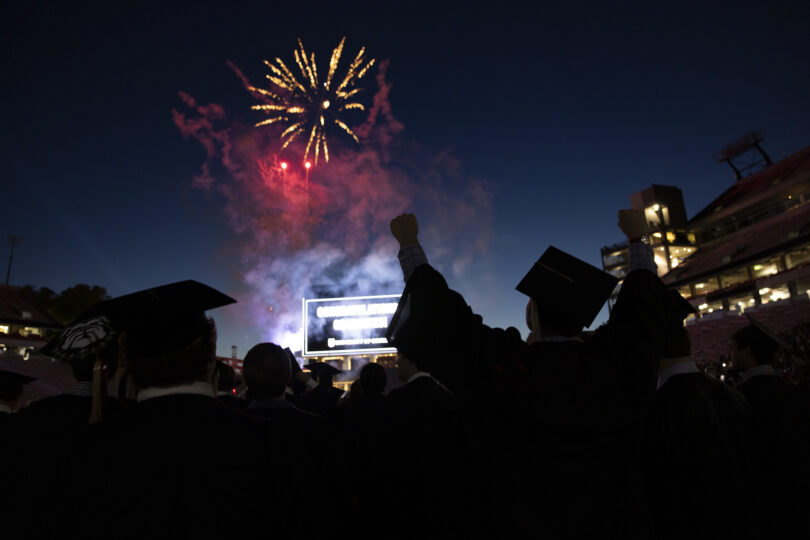 Despite the lingering effects of the pandemic, friends of the University of Georgia came together during fiscal year 2021 to support students and the university, resulting in a total of $205.2 million given to UGA, including over $10 million to the campaign that created the Jere W. Morehead Honors College.

“To see this level of support during such a pivotal time is truly inspiring,” said UGA President Jere W. Morehead. “My heartfelt thanks to every person who gave. They helped our students, faculty and staff persevere through unprecedented challenges, and they are ensuring that as we overcome those challenges, we will emerge ready to further strengthen UGA’s commitments to our students, community, state and world.”

The $205.2 million came from a total of 69,573 donors. UGA’s three-year rolling average, which averages the three most recent years of giving, held steady at over $200 million. The university’s alumni participation rate, the percentage of UGA alumni who made a gift to the university in the past year, increased to a record 15.2%, up from 12.8% in FY20.

“At the start of the fiscal year, I would have said we would be hard-pressed to have the kind of fundraising success we’ve enjoyed in years past, but UGA alumni, donors and friends proved, once again, that their commitment to supporting our students, faculty and mission knows no limits,” said Kelly Kerner, vice president for development and alumni relations.

The story of this year was largely one of improvising and persevering, but UGA donors and friends were responsible for several significant strides made by the university over the past year.

UGA donors in FY21 also reaffirmed their commitment to providing support for students with financial need. The Georgia Commitment Scholarship (GCS) Program, which provides need-based scholarships and special on-campus support to Georgia students, grew to include 600 GCS scholarships and has, to date, accounted for close to $90 million in new commitments to need-based aid. One such commitment was a substantial pledge in June from Mary Virginia Terry, which will support 24 students beginning in the upcoming fall semester.

Private giving’s impact at UGA isn’t limited to high-dollar donations. In FY21, UGA supporters made tens of thousands of gifts of $100 or less. Together, contributions like these were able to improve the university in numerous and varied ways. The “$60-for-60” campaign, as part of UGA’s recognition of the 60th anniversary of desegregation at the university, garnered a record 2,905 gifts to the Black Alumni Scholarship Fund, and a campaign to honor a legendary UGA staffer resulted in the creation of an endowed meal plan scholarship fund, to name a few.

Donors also were responsible for creating 138 new scholarship funds, and the 11 endowed faculty positions they established brought UGA’s total to 322.