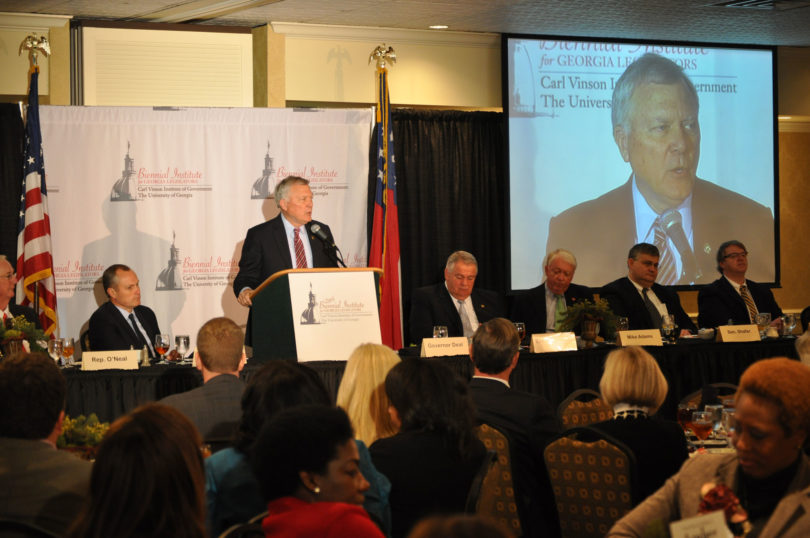 The photographer is Lucas Underwood.

Athens, Ga. – Members of Georgia’s General Assembly convened Dec. 9-11 in Athens for the Biennial Institute for Georgia Legislators, marking the 28th such gathering of lawmakers at the University of Georgia. The Biennial Institute, coordinated by UGA’s Carl Vinson Institute of Government since its inception in 1958, continues to be an anticipated event on the Georgia political calendar.

As in past years, the 2012 Biennial offered the first opportunity following the elections for both veteran and freshman legislators to come together as a group and discuss significant policy issues in advance of the coming legislative session. The event culminated with an address by Gov. Nathan Deal as he outlined his policy priorities for the coming year.

The Biennial officially came to order the evening of Dec. 9 at the Georgia Center with welcoming remarks from Speaker of the House David Ralston, Lt. Gov. Casey Cagle, and Vinson Institute Director Laura Meadows. Two keynote speakers also addressed the lawmakers. Sandra Magnus, an astronaut aboard NASA’s final space shuttle mission, shared insights on leadership gleaned from her experiences working on complex projects in the space program. Legislators got an insider’s account of the current climate in Washington, D.C., and ongoing deficit negotiations from U.S. Senator Saxby Chambliss.

Nearly all of the state’s 180 representatives and 56 senators were in attendance in the Georgia Center for the three days of the Biennial. When sworn in in January, the 152nd General Assembly will include a large number of individuals serving their first terms in the legislature-37 in the House of Representatives and five in the Senate. The Biennial Institute offered these freshmen legislators the chance to network with their new colleagues and learn more about key matters they will face as they represent their constituents in Atlanta.

Gov. Deal, in his first opportunity to address the new legislature, brought the Biennial to a close during a speech that described Georgia’s current budgetary and economic situation. He also provided an overview of some specific policy initiatives he hoped the legislature would undertake during the 2013 session. His attention focused primarily on transportation and education-two issues he emphasized as important for economic development-and health care.

The Carl Vinson Institute of Government is a public service and outreach unit of the University of Georgia that provides customized assistance, applied research and professional development for government leaders and employees across Georgia and internationally.