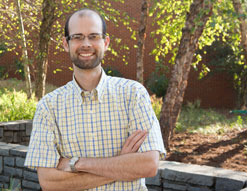 John Drake, an associate professor in the Odum School of Ecology, will use a five-year, $3.18 million grant to develop an early warning system that could help public health officials prepare for—and possibly prevent—infectious disease outbreaks.

Funded by the National Institute of General Medical Sciences, part of the National Institutes of Health, the research is part of the Models of Infectious Disease Agent Study, a coordinated network of scientists who use computer models to study infectious disease dynamics. While each scientist leads an individual project, they work together toward the overall goal of helping the public health community prepare for and respond to infectious disease outbreaks.

Drake and his colleagues—Andrew Park of the Odum School and the College of Veterinary Medicine, Pejman Rohani and Bogdan Epureanu from the University of Michigan and Matthew Ferrari of Pennsylvania State University—will develop mathematical models to forecast when a disease system is approaching a “tipping point,” a threshold at which conditions become favorable for an outbreak to occur.

Drake said that tipping points occur in all kinds of complex systems-everything from financial markets to Earth’s climate system. Once a tipping point has been passed, the system is vulnerable to collapse. But before that happens, there are signals that can alert observers a tipping point is imminent.

Preliminary research by Drake and his colleagues suggested that patterns characteristic of an approaching tipping point could be detected in public health reports based on fluctuations in the number of cases of the disease being monitored. If public health officials were able to spot such a pattern as it happens, they might have time to prepare for an outbreak-or possibly even intervene and reverse the changes pushing the system toward one.

Obstacles exist. The capacity for public health surveillance varies from country to country. Timely reporting is not always possible, and the likelihood of inconsistent reporting or under-reporting is particularly high in some areas.

Drake said the research will provide information that public health officials could use to design more effective monitoring programs. For instance, reporting may need to happen on a different schedule, depending on the pathogen.

To carry out their project, the team further will refine the theory and statistical methods for forecasting infectious disease outbreaks based on tipping points.