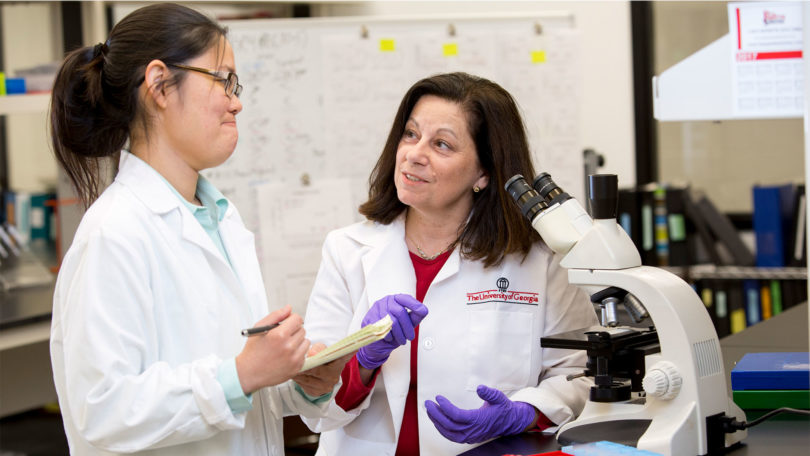 Externally funded research activity at UGA has climbed 37 percent over the past three years to reach $197 million in fiscal year 2017. Professor Karen Norris, above, is the GRA Eminent Scholar in Immunology and Translational Biomedicine in the College of Veterinary Medicine. (Photo by Dorothy Kozlowski/UGA)

The latest annual study on the University of Georgia’s economic impact on the state of Georgia shows that the institution’s teaching, research and service generate $5.7 billion in economic activity across the state.

The study, conducted by UGA economist Jeffrey Dorfman, quantified variables such as the increase in earnings that graduates of the university’s schools and colleges receive, the economic impact generated by externally funded research activity, and the creation of business and jobs that result from the university’s public service and outreach units.

“This news is important because it means the University of Georgia is expanding its positive impact on lives and communities across this great state,” said President Jere W. Morehead. “Our mission to serve Georgia remains—and will always remain—central to everything we do at this institution.”

The instruction that UGA offers increases the current and future earnings of degree holders, as well as tax revenues in the communities in which UGA graduates reside. To measure the economic impact of the degrees that UGA awards, Dorfman and his colleagues took data on earnings by major and multiplied the estimated value of each degree and major offered by UGA by the number of graduates in the 2016-2017 academic year. To ensure they were capturing the economic impact in Georgia alone, they multiplied the economic impact of the degrees awarded by the percentage of each college’s alumni who remain in the state after graduation. Overall, nearly two thirds of UGA graduates remain in the state after earning their degrees.

UGA’s research brings external funding to the state that creates economic impact and also results in inventions and discoveries that lead to new products and businesses. Externally funded research activity at UGA has climbed 37 percent over the past three years to reach $197 million in fiscal year 2017. Discoveries by UGA scientists have resulted in more than 675 products that have reached the marketplace, including crop varieties, vaccines and software. Licensing and royalty revenue from these inventions contribute to UGA’s economic impact, as do the more than 160 startup companies that are based on UGA inventions.

Service to the state of Georgia is an integral part of UGA’s land-grant mission, and the university’s public service and outreach units contribute to economic prosperity and quality of life through programs for individuals, businesses and communities. UGA’s Small Business Development Center, for example, last year provided nearly 3,700 small business owners and prospective entrepreneurs with advice and expertise through its 17 offices across the state. SBDC assistance helped launch nearly 350 new businesses last year, as well.

Dorfman emphasized that the study is a conservative estimate that captures economic impacts that would not exist were it not for the presence of the University of Georgia. He noted that some university units, such as the 4-H youth development program, provide enormous benefits to the state that either cannot be translated into dollars of economic impact or are difficult to quantify with enough accuracy to include in the study.

“Through their teaching, research and service, our faculty and staff each contribute to the University of Georgia’s $5.7 billion economic impact,” said Senior Vice President for Academic Affairs and Provost Pamela Whitten. “We are united in our commitment to making Georgia an even better place to live and work.”

Learn more about UGA’s $5.7 billion annual economic impact and connect with us at itstartswith.uga.edu.