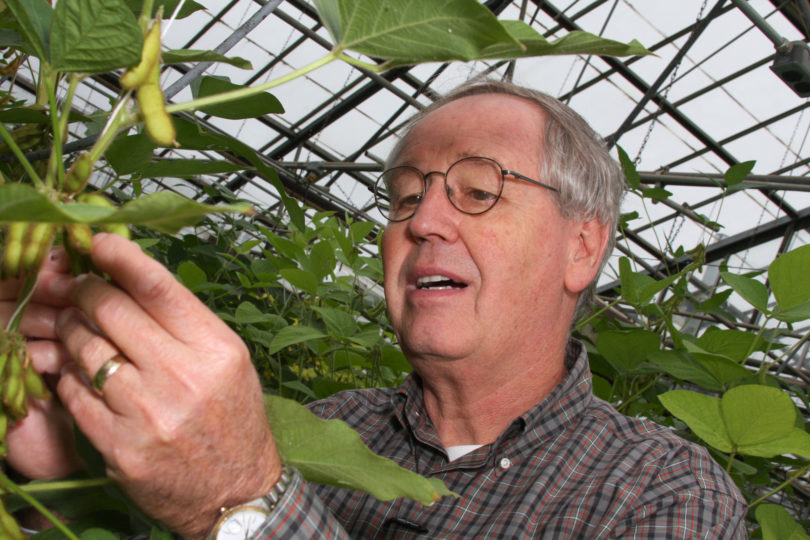 During his 40-year career at UGA

Roger Boerma spent 40 years breeding new soybean varieties, but the true measure of his career may be the number of friendships that he cultivated over those years.

About 150 of his former students and colleagues came together June 28 and 29 to celebrate Boerma’s retirement from UGA with the symposium, “Forty Years With Soybeans: A Symposium in Honor of Dr. H. Roger Boerma for His Excellence in Soybean Research.”

Boerma officially retired at the end of June from the department of crop and soil sciences. He has now taken a position with the Georgia Seed Development Commission.

Partly a serious discussion on soybean research, and partly a nostalgic roast of a well-known researcher, the symposium saw several presenters tear-up as they told the audience how Boerma had shaped their careers.

Many colleagues noted the Boerma’s greatest talent was his ability to foster productivity, either by encouraging students and researchers who were feeling frustrated by long-running projects or rallying people together to tackle new challenges.

“Roger exudes so much enthusiasm, love and dedication to his craft that it couldn’t help but transfer to other people, including me,” said Zach Shearin, a former student of Boerma’s. “Every time I met with him, no matter how poorly my project was going, no matter how bad a day I was having, I always left him feeling energized and motivated again. You couldn’t help but feel that way after spending time with him.”

During his tenure at the university, Boerma helped found the Institute for Plant Breeding, Genetics and Genomics and the Center for Applied Genetic Technologies. He pioneered the use of genetic markers in plant breeding and registered 25 new varieties of soybeans, focusing on increasing yields and developing better pest and drought tolerance.

In 2011, Boerma won the University of Georgia Research Foundation’s Creative Research Inventors Award in recognition of development of new breeding techniques using genetic markers. These techniques shrank the time it takes to develop a new crop variety from about 12 years, in the 1970s, to five years or less.

Beyond the lab, he and his colleagues’ work contributed largely to the growth of the soybean crop in Georgia, which now occupies 300,000 acres. Average soybean yields have grown from 10 to 30 bushels an acre and require fewer pesticides and less irrigation.

Several seed companies and plant breeders have created a $31,000 endowment at the UGA Institute for Plant Breeding, Genetics and Genomics. The money will be used to help students travel or buy research equipment and may eventually be used to cover scholarships.