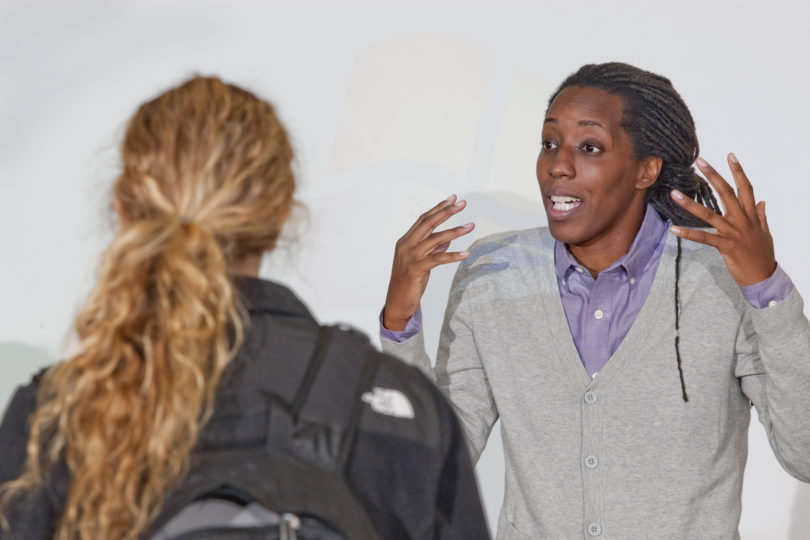 There aren’t many college classes in which the majority of students voluntarily stay after class is dismissed to continue a class discussion.

But that’s exactly what happens when class is over in the First-Year Odyssey seminar “Exploring the History of Hip-Hop and Why It Matters” taught by Bettina L. Love, an assistant professor of educational theory and practice in the College of Education.

After each class is over, Love and her students hang around a while longer to share and critique YouTube videos of recently released hip-hop music just because they love the music.

Love, a hip-hop culture scholar, said she learns a lot about new music from her students just from talking about what they like.

That class participation and engagement between students and faculty is exactly what First-Year Odyssey seminars are supposed to be about.

The seminars, which can cover an impressive variety of topics, are designed to be an introduction to academic life at UGA for first-year students through a relaxed, small classroom environment.
Referring to the title of her class, Love said hip-hop matters as a classroom topic because it’s an influential force in the lives of students today.

“We have a generation of youth, who regardless of their race, class, sexual orientation, ethnicity or religion, coalesce around hip-hop,” Love said.

As proof, Love points to her First-Year Odyssey class, which she calls one of the most diverse she has had as a teacher.

“They’re all engaged in hip-hop,” she said.

What Love hopes her students take away from the class is how to become “critical consumers of hip-hop.”

To do that, Love’s class discussions go beyond the boundaries of music.

The course covers the musical history that lead to the creation of hip-hop, the role graffiti plays in the culture, gender issues in hip-hop and Southern hip-hop-also known as dirty South.

From there, the discussion can go to a variety of current event issues.

“I think hip-hop is a great place to have real conversation about race, class, homophobia and capitalism-because it is rich and ripe with all of that,” Love said.

In a class discussion of hip-hop mogul Jay-Z, the class grappled with whether influential hip-hop figures have an obligation to speak out on social issues.

Using the window of hip-hop to address these broader issues seems to resonate with the students.

Bridget Sivewright of Conyers said the class has helped her learn how to better articulate her opinion. She said she’s also developed a more sophisticated taste in music.

A’Ja Johnson of Barnesville said she’s started to pay closer attention to lyrics and the message of the music she likes.

She said of the class, “It makes you think of the effects the music has.”