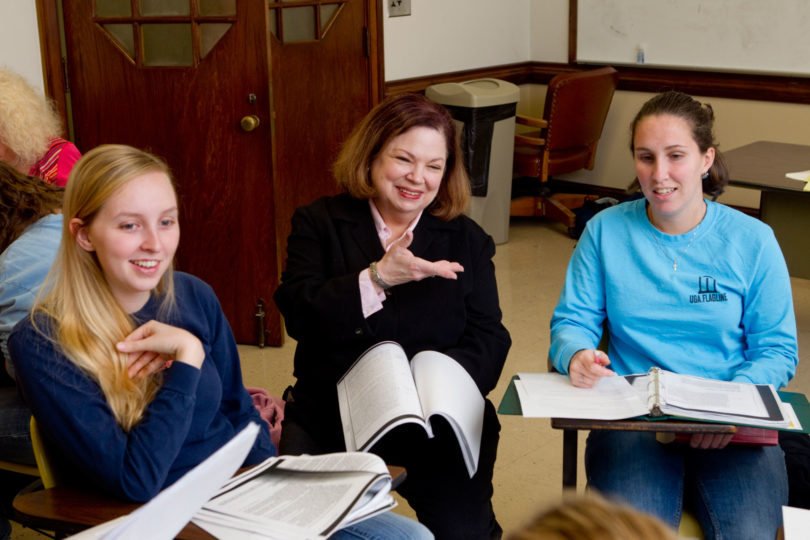 The story of the Holocaust is often told in numbers—6 million Jews murdered, plus 200,000 Gypsies and another 200,000 people with disabilities, in addition to others—or focuses on the horrifying efficiency with which the Nazis committed the genocide. Students in a new interdisciplinary Franklin College of Arts and Sciences class, however, are learning about the Holocaust from another perspective: the victims’.

“The class is a way of approaching Holocaust studies in a way that isn’t strictly a history class or a literature of the Holocaust class,” said Marjanne Goozé, the associate professor of Germanic and Slavic studies who started the class this semester. “It also has elements of sociology and qualitative research methods.”

On an unseasonably warm winter day, the 28 students in her class were discussing The Journal of Helene Berr, written between 1942 and 1944 by a young Jewish woman in France. Berr, who died at a German concentration camp days before it was liberated, was a college student when she began writing the text, making her someone to whom the UGA students could easily relate.

The semester begins with readings of daily accounts, such as Berr’s journal, and then moves on to memoirs written after the war and then to recent fictionalizations such as the film Defiance. The students also will read Deborah Lipstadt’s History on Trial: My Day in Court with a Holocaust Denier, in which the author tells the story of her libel trial in London against David Irving, who sued her for calling him a Holocaust denier and right-wing extremist. Lipstadt, the Dorot Professor of Modern Jewish History and Holocaust Studies at Emory University, will speak to the class and will deliver a public lecture on her latest book, The Eichmann Trial, at 5 p.m. March 1 in Room 171 of the Miller Learning Center.

Discussion is a major component of Goozé’s class, with the students often rearranging their desks into small-group circles. Even after they pack up their book bags and shuffle out the door, the discussion continues online with mandatory postings in which the students engage each other while analyzing the texts. A topic as emotionally laden as the Holocaust inevitably stirs strong emotions, but the rules of the online discussions are clear: Criticize the idea, not the person.

The in-class discussion of the Berr journal and other readings touched on themes that transcend the Holocaust, including objectivity versus subjectivity, individual versus collective identity and the role of bystanders who go about their lives as if everything were normal as tragedy unfolds around them.

Interdisciplinary classes in the Franklin College began in 2009, and others include “Science and Human Values,” “Leadership and the Arts and Sciences” and service-learning classes.

For Goozé, the class complements her research interests, which include Jewish-German writers, Holocaust narratives and personal narratives. Because there’s been interest, Goozé said plans on teaching it next spring.