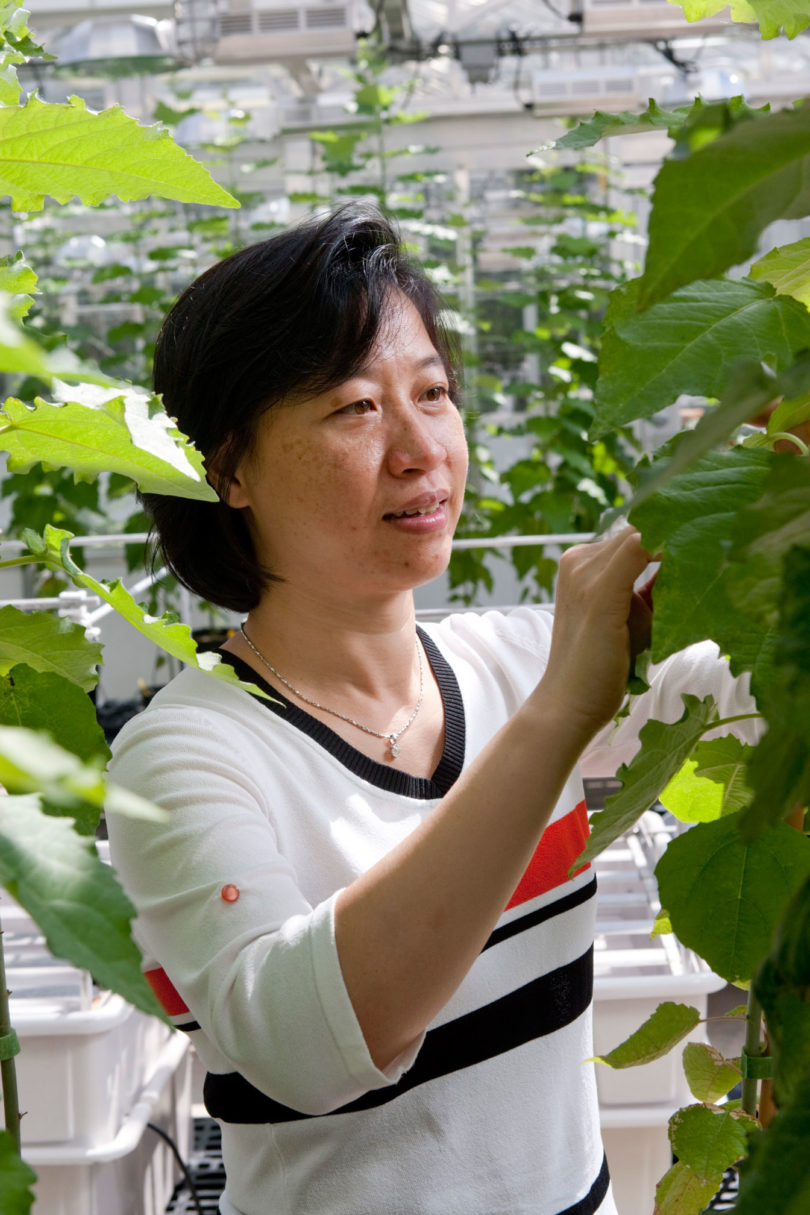 so the researchers knew the CRISPR system worked when they saw the red stems on their plants.

Athens, Ga. – In the ongoing search for cleaner, renewable energy sources, biofuels derived from trees, shrubs and grasses have emerged as a strong candidate. But creating the next generation’s energy source is not as simple as growing a few crops; extensive research is required to ensure that these plants produce enough biomass and fuel per acre to make biomass farming economically viable.

Now, with the help of grants from the U.S. Departments of Agriculture and Energy, University of Georgia professors Chung-Jui Tsai and Andrew Paterson are conducting fundamental research to better understand the plants that may one day produce the fuel that powers our vehicles and homes.

Tsai, a Georgia Research Alliance Eminent Scholar and professor in the Warnell School of Forestry and Natural Resources and the Franklin College of Arts and Sciences, received $1.496 million to study the importance of plant proteins called tubulin, which play critical roles in many basic plant functions.

Her lab is particularly interested in how tubulin affects the development of Populus, a genus of woody plant that includes species like poplar, aspen and cottonwood trees. Tubulin proteins are thought to regulate the wood development and, based on their recent findings, plant water use, so if Tsai’s laboratory can modify tubulin levels, the researchers may be able to accelerate wood growth and make the trees more drought resistant.

“We are interested in traits that influence biofuel production, and the number one trait is biomass volume,” Tsai said. “So wood formation is something we are very interested in.”

Tubulin may help regulate the deposition of cellulose, an organic compound that accounts for up to 50 percent of poplar biomass. If Tsai’s team uncovers the ways that tubulin influences the accumulation of cellulose, they may find ways to manipulate the genetic makeup to create trees that produce more cellulose, and, consequently, yield more biofuel.

Manipulation of tubulin could make poplar easier to process into products like ethanol.

“It would be great if we could increase biomass, but we think tubulin manipulation is more likely to affect cell wall properties,” Tsai said. “If we understand the system better, it might have the kind of properties that make it more amenable to biomass deconstruction.”

But tubulin also plays a significant role in controlling the movements of a special class of cells known as stomatal guard cells. As the name implies, these cells guard the tiny holes, or stoma, on the surface of plant leaves. The opening and closing of the guard cells allows the plant to take in carbon dioxide and expel oxygen, a byproduct of photosynthesis.

During drought, stomatal guard cells close off the openings on the leaf to prevent loss of water to the atmosphere, and the process of photosynthesis slows. Tsai’s lab found that modification of tubulin proteins could alter the behavior of guard cells to allow photosynthesis to continue at high rates even when they do not receive optimal amounts of water.

“This could translate into more biomass from trees grown in stressful environment, like the persistent drought many parts of the country is experiencing,” Tsai said.

Ultimately, stress tolerance will be equally, if not more important than wood properties for developing perennial crops like poplars for bioenergy use.

“Tubulin offers a rare opportunity for us to tackle both traits at the same time,” she said.

Paterson, a Regents professor in the College of Agricultural and Environmental Sciences and the Franklin College of Arts and Sciences, researches grasses that show potential as high-biomass energy crops. He is particularly interested in discovering more about the genetics of what he calls “plant architecture,” the number and size of stalks or branches that plants develop as they grow. Exploratory work conducted with graduate student Wenqian Kong provided the justification for his $575,000 award.

“A plant has choices to make as to how it invests its resources,” Paterson said. “We’d like to get a handle on genes that determine how plants allocate their resources across various kinds of branches.”

Once researchers identify and understand how these genes affect plant architecture, it will become possible to modify the plants so that they grow stalks, branches and leaves that are ideal for biofuel production.

But a better understanding of plant genetics also allows researchers and farmers to create plants that will survive in different environments. Just like all plants, biofuel grasses alter their growing patterns based on a number of factors, such as the amount of rainfall, sunlight and soil nutrients they receive.

“If we better understand the genetics of plant architecture, we can try to tailor the crops to fit the land that they are going to find themselves in,” he said. “We can tailor the foot to fit the shoe, if you will.”

Paterson’s research for this grant is focused on sorghum, a genus of grass that can produce high biomass yields, even under adverse conditions. However, Paterson expects their work to extend to other biofuel candidates as well.