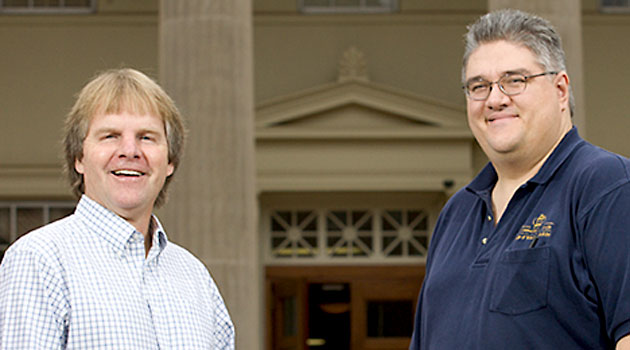 Jim Moore has been doing it for more than 20 years, steady and consistent. His colleague in the vet school, Chris Barker, started regularly about five years ago.

Both men call their gifts modest, but over time their contributions have continued to add up. Every month, through payroll deduction, they give back to the University of Georgia.

Moore, a research professor, and Barker, a veterinary technician, are among an expanding group of UGA faculty and staff donors. This month, staff and retirees will be invited to celebrate the campus kickoff of the Archway to Excellence Campaign at a reception and program featuring refreshments and door prizes. Current employees and retirees will all be given an opportunity to participate in the campaign.

“The University of Georgia’s students, faculty and staff greatly benefit from private contributions to our academic programs, and if UGA is to maintain and enhance its learning environment, it is essential that this support continues,” said Arnett C. Mace, Senior Vice President for Academic Affairs and Provost.

Moore said UGA faculty and staff members should not be concerned about the size of their gifts to the university. “Don’t worry if the amount you are considering might be small in comparison to what someone else is donating,” he said. “The key to giving is to be consistent and let it become a habit rather than a one-time choice.”

Barker said even though he considers his monthly donations to be small, it still helps. “It doesn’t equal out to a whole lot, but it is a contribution.”

These donations are part of the more than $390 million that has been raised so far toward the $500 million goal of the campaign. Mace said this support is an indication that donors believe in the work being done at UGA.

“It’s clear that UGA alumni and friends value the work of UGA faculty and staff and have confidence in their ability to prepare today’s youth to be tomorrow’s productive and engaged world citizens,” he said. “Now it is time for the members of the university community to show UGA donors and friends that we, too, support the Archway to Excellence goals of Building the New Learning Environment, Maximizing Research Opportunities, and Competing in a Global Economy.”

The campus kickoff is scheduled for March 21, 2006. The program runs from 3-5 p.m. at Georgia Hall in the Tate Student Center. Door prizes include tickets to UGA sporting events, a golf package, tickets to events at the Performing Arts Center, gourmet gift baskets and much more.