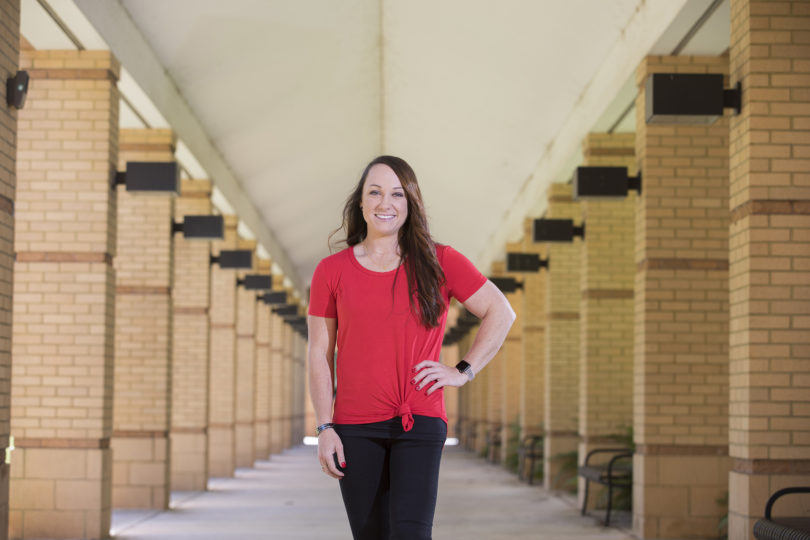 Andi Broom is working toward a dual degree so that she can give back to the rehabilitation institute that helped her. (Photo by Peter Frey)

When Andi Broom joined the U.S. Army, she was ready to leave her past behind—the old high school crowd, a few uninspiring semesters at the University of Georgia and even the contents of her apartment.

“I joined the military without my parents knowing; I called from basic training, and my dad had to come up to Athens and get all my stuff,” she said.

The change was what she needed. A star softball player in high school, Broom tore her rotator cuff during her senior year, changing her prospects for an athletic scholarship. In the U.S. Army, she regained her stride. She was stationed at Fort Campbell on the border of Tennessee and Kentucky, home to the 160th Special Operations Aviation Regiment, where she had many friends. She wanted to join them.

There aren’t many roles for women in Special Operations, but she applied and, after one deployment with a Navy SEAL unit, was recruited for an elite Special Operations team. This was her calling, and for more than six years she experienced the rush of adrenaline every time she was sent on top-secret missions in the Middle East and elsewhere.

Much of her work involved parachuting, which fit her fearless nature. But one day, on perhaps the 10th jump of a day of training exercises, everything changed.

There was some bad weather coming in, but all was fine as her parachute deployed and she prepared for landing, following the swooping pattern paratroopers follow as they return to Earth.

“At about 65 feet, I was coming in to my final turn and as soon as I turned a gust of wind hit me.” She had turned deep, too, which meant her parachute was nearly collapsed in half as she navigated to land. When the wind caught it, it sucked the remaining air out of it. There wasn’t enough time for it to catch more air, and Broom dropped roughly six stories to the ground.

The impact collapsed both of her lungs, tore her aorta, broke arm and leg bones and shattered her pelvis. She was taken to a nearby civilian hospital rather than a military one, where, as luck would have it, a heart doctor from the Cleveland Clinic happened to be on call. Yet, doctors told the dozens of friends gathered to say goodbye—they didn’t think Broom would survive the night.

Dozens of surgeries later, Broom made a commitment to deploy again. This required relearning how to talk, walk and use her right arm. But she knew her body couldn’t handle the rigors of the job over the long term. After rehabilitating at EXOS Athletes Performance Institute in Florida, she realized the effect exercise can have on a body’s ability to heal. It also helped her find her way back to UGA in January 2017.

Now she’s taking classes toward a dual degree in athletic training and exercise and sport science in the College of Education’s kinesiology department.

“I feel like an aunt to these kids,” she said. “I’ve had conversations with them about finances—even about boys.”

And school is different this time around. Broom had three traumatic brain injuries and finds it harder to learn. She reads more slowly than she used to.

“I have to study triple time,” she said.

At first, she was stubborn and tried to tough it out. A friend had to talk her into using the Disability Resource Center to take her tests.

“Like my dad said, ‘When you get your degree, it’s not going to be on there that you took your tests at the DRC.’ ”

She’ll apply to her major officially in January and even has an internship at EXOS lined up. That’s her goal—to go back to EXOS and help others like the EXOS staff helped her.

“I shouldn’t have survived—who survives that?” she said. “So, I want to give back in a different way than when I was in the military, and this is what I can do now.”