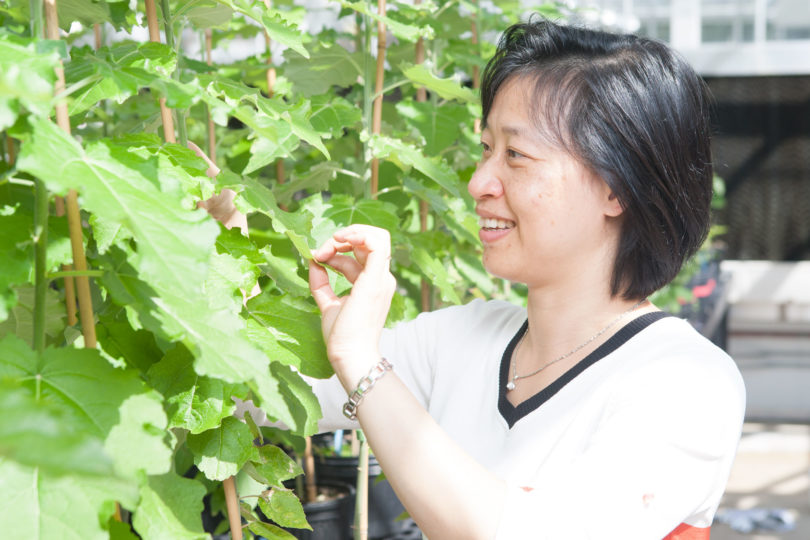 Salicylic acid is key to protecting plants from everything, from extreme temperatures to diseases. But increasing this naturally occurring chemical typically results in stunted plant growth.

A UGA research team recently discovered a way to jump the salicylic acid hurdle and increase levels in poplars without a negative impact on growth, potentially paving the way for better-growing crops and trees.

In a paper recently published in Plant Cell, the team outlined how its approach differs from previous attempts to increase salicylic acid levels in plants while avoiding growth stagnation.

“It’s such an important hormone,” said C.J. Tsai, a UGA professor with joint appointments in the Warnell School of Forestry and Natural Resources and the Franklin College of Arts and Sciences genetics department. “People have gone after this for a long time, but previous attempts to increase the levels of salicylic acid have often had unwanted side effects. We’re very excited about the possibilities our method has, particularly because it has a lot of potential for both trees and crops.”

Salicylic acid regulates plant systems like photosynthesis and defense against abiotic and biotic stresses such as temperature, drought and disease. To get over the salicylic acid hurdle, the UGA researchers took a team approach to the problem.

First, Tsai’s former postdoctoral student Yinan Yuan developed a new strategy for increasing the salicylic acid levels by testing a bi-functional bacterial gene in poplar. This included obtaining the gene and designing the proper expression vectors for introduction into the plants.

After Tsai joined the faculty of UGA in 2008, her team created transgenic poplar trees for the study, with former postdoctoral research associate Wenbing Guo overseeing the experiments.

They then used what they learned from other work they were conducting in the lab-developing genomics tools that included transcriptomics (gene expression), metabolomics (unbiased analysis of metabolites) and computational data analysis pipelines-to analyze their results, which required Liang-Jiao Xue, a bioinformatics postdoctoral research associate, to build the metabolite and gene networks they needed to dissect the complex regulation. Metabolites are produced by a living organism’s metabolism and have a number of functions, including defense and growth.

They found many metabolites and genes previously associated with salicylic acid regulation and then discovered many more that, before this study, have never been identified. They will use these findings in future experiments.

“It will be interesting to see how these metabolites and genes are regulated in multiple species under both normal and stress conditions, as this will provide more clues on how plants adapt to a changing environment,” Xue said.

Poplars were chosen for the study because of their naturally high levels of salicylic acid, Tsai said. The team was excited to discover the transgenic poplars they created can produce several hundredfold higher levels of the hormone while showing normal growth.

“This has multiple implications,” she said. “The poplar system enables us to identify downstream gene targets that are activated by salicylic acid for defense. This means that we can potentially target those genes for improvements. From an applications perspective, salicylic acid can be bypassed in salicylic-acid-sensitive crops if we can learn how its gene targets function and then deal with those directly.”

The study was funded by the National Science Foundation and by the Winfred N. “Hank” Haynes Professorship endowment fund.