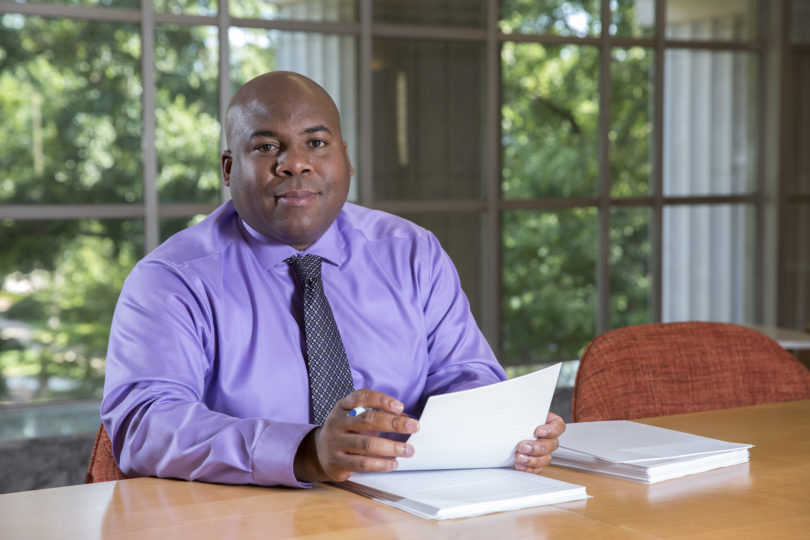 After having heard about working in scholarly publishing from friends who had interned in the field, Walter Biggins was a new college graduate when he accepted a position as assistant to the director of the University Press of Mississippi in 1999. That position propelled him down a career path that continues to this day in his role as senior acquisitions editor for the University of Georgia Press.

Biggins, who graduated from Millsaps College with a bachelor’s degree in English, had never been exposed to scholarly publishing before he joined the staff of the University Press of Mississippi, but he took to it quickly. After starting off doing tasks like grant writing and administrative work, Biggins began to accumulate more responsibilities and transitioned to the role of acquisitions editor.

“At the University Press of Mississippi, the director had two full-time jobs: being the director and acting as an acquisitions editor for 25-30 books,” Biggins said. “Because of that, I learned a lot about acquiring books and working with authors in a way I might not have if I’d been an assistant for a director at any other press.”

As a senior acquisitions editor at UGA, Biggins is like “a talent scout for books.” He reads manuscripts, works with authors, conceptually edits for ideas and structure and helps decide which books the University of Georgia Press will publish.

The process starts with Biggins reading over a manuscript pertaining to a field in which he has experience. Those fields include African-American studies, 19th- and 20th-century American history, American literature, Caribbean studies, film and popular culture and international relations.

If he believes the book might be worth pursing, Biggins will work with the author to address any structural or conceptual issues the manuscript might have. He also will begin looking for experts who can complete a peer review of the work before it is published.

“One of the things that’s cool about being an editor is that you learn to have a limited interest in a lot of different fields,” Biggins said. “So while I’m not necessarily an expert in 18th-century Caribbean studies, I know the field well enough to know who the experts are.”

For Biggins, the best part of his job is finding a manuscript he thinks could make a “really cool book,” and then improving upon it. He also likes that his role as a senior acquisitions editor permits him some say in creating a new series or focusing on certain content areas.

“That’s fun too, not just thinking about individual books, but also thinking about the fields of study and what’s not being produced that we could publish,” he said.

While not all his acquisition areas are personal favorites, Biggins does have a passion for pop culture, particularly comic and movie criticism.

“Since I was 16 or so, I was really interested in the way people talk about movies,” Biggins said. “I was a weird, nerdy kid who was as interested in criticism as I was with the films themselves.”

Biggins, whose list of favorite writers includes many film critics, grew up in a household where comics and films were prevalent. His parents also encouraged the discussion of movies. Biggins’ stepdad even gave him For Keeps: 30 Years at the Movies, a compilation of essays by The New Yorker film critic Pauline Kael.

“I still have that book with all the marginal notes I wrote in it from when I was 18,” Biggins said. “I can remember picking through that and marveling at her prose, and now I argue with her. There are things she likes that I don’t.”

In his mind, the way humans discuss popular culture defines “how we think of ourselves and the way we look at the world.” Biggins said the field of popular culture criticism provides a broader and deeper understanding of humanity. And with his work at the UGA Press as well as his personal criticism writing, Biggins feels like he’s improving that understanding.

“I like knowing that in some small way, I’m shifting the conversation or I’m adding to it and giving people ways to think about things,” he said.