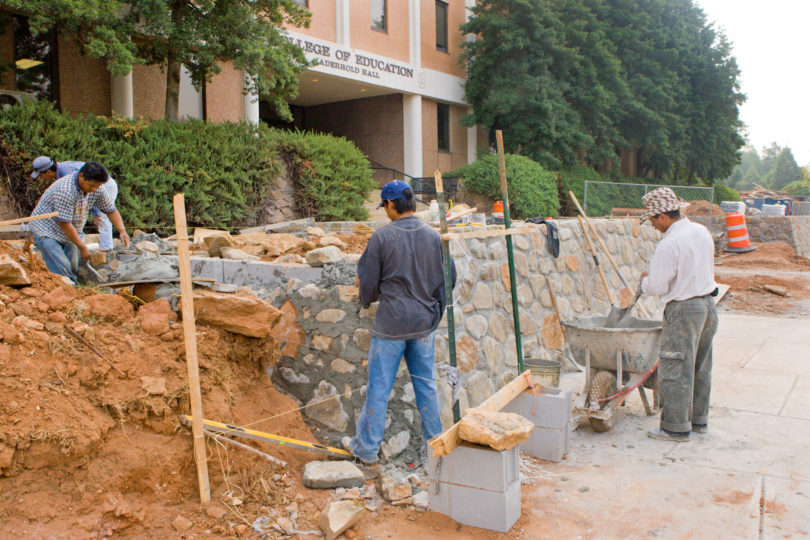 Workers set stones in a wall that will be part of a new look for the front of Aderhold Hall.

When the College of Education celebrates its centennial next summer, the front entrance of its primary home, Aderhold Hall, will have a new look featuring a bench-lined plaza, landscaping with decorative rock planters and a new, more pedestrian-friendly bus stop.

The new look for Aderhold comes courtesy of a $717,000 project to repair and upgrade Carlton Street. Contractors began the work last year, rebuilding the Carlton Street and East Campus Road intersection and replacing water lines running in front of Aderhold.

The construction project, when completed this fall, will provide easier access to the building, improve the drainage system and resolve potential safety issues with the crosswalk and bus pull-offs on Carlton Street.

The redesign of Aderhold’s front entrance will feature sidewalks angling up to the plaza from each side of the building. The redesign was developed by the university Physical Plant and engineering consultant Jordan, Jones and Goulding.

Additional plans for the project include the creation of an alternate rush-hour route from Green Street onto Carlton Street by the Warnell School of Forestry and Natural Resources to reduce the traffic bottleneck at East Campus Road.

The college also has offices and classrooms in two other buildings—the Ramsey Student Center and River’s Crossing. In addition, the college’s Georgia Center for Assessment is located in a new facility off the Atlanta Highway in western Clarke County.