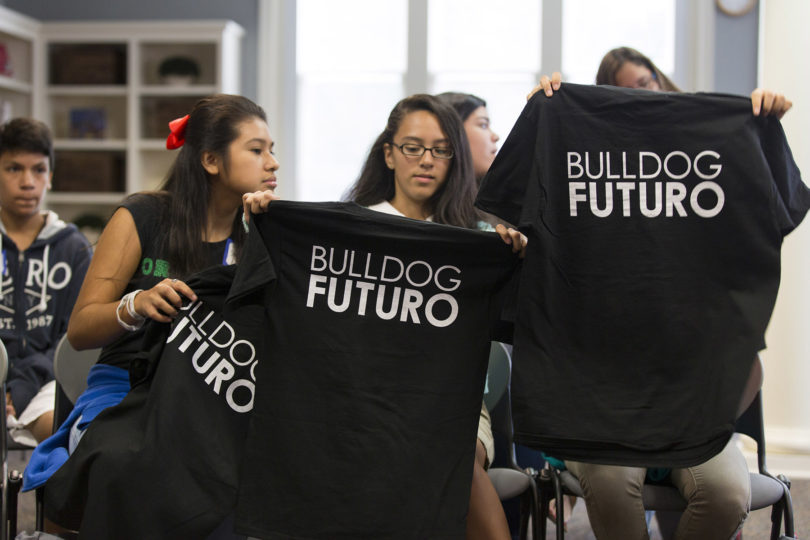 Shortly after UGA’s historic campus came into view, nearly two dozen Clarke Middle School students gathered in front of the Arch before spending a day learning how they can one day return to campus and earn a degree.

The students, who are high-achieving Latino students, visited UGA Sept. 21 as part of the university’s Gear Up for College program. Administered by the Office of Admissions and developed by the J.W. Fanning Institute for Leadership Development, a public service and outreach unit, the program is part outreach, part admissions pitch.

“A lot of these kids, although they’re very bright, will be first-generation (college students) so they’re really unaware of how to navigate the college process,” said Jonathan Brunson, assistant director of admissions for outreach, who has managed the program since its inception in 2008. “Although it’s a fun day for them, they’re still here to learn how to prepare for selective college admissions.”

During their visit, the students participated in interactive activities to help them understand the college process. They explored possible majors, discussed financial aid and career options. The group also had lunch on campus with a current Latino student and went on a tour of campus.

“Of course, we want them to come to the University of Georgia, but this is about getting them ready for college anywhere,” said Brunson, who often will speak in Spanish as he’s greeting and working with the students.

Students’ questions to Brunson cover everything from campus life to admissions requirements. He recalled once walking through the Miller Learning Center with the group. One of the program participants saw a college student napping in a chair and asked, “Can you take naps in college?”

“They’re in eighth grade, and it’s their first time on UGA’s campus for many of them so they don’t know what college life is like at all,” Brunson said.

Gear Up for College has grown a lot since it first started. In the first year, there were six campus visits with a total of 150 students. This year, the program is estimated to reach 300 Latino students during a total of 15 campus visits. From that first year of the program, 20 percent of those students applied to UGA; the group had an acceptance rate of 80 percent.

The success of the program hasn’t gone unnoticed. The program has received a grant and additional funding over the years, and, according to Brunson, the program will be expanded to bring other underrepresented populations to campus.

Most recently, Gear Up for College was recognized by the White House and placed in the federal government’s Bright Spots in Hispanic Education National Online Catalog, which highlights efforts around the U.S. that “support Latino educational attainment and excellence.”

According to the catalog’s website, “Bright Spots are programs, models, organizations or initiatives that are helping close the achievement gap.”

“I was shocked when I heard we were recognized,” Brunson said. “We are the only university in the state of Georgia awarded that honor. I would say it’s a major stamp of approval; it validates all the work that we do.”

While Brunson said the early days of the program took a lot of legwork to get buy-in from Georgia middle school officials, the recognition “has been a long time coming.”

“It was unheard of in 2008 for a college admissions office to do middle school outreach,” he said. “Now it’s a national trend. Just to see the program grow, to see us receive funding and support—and now it’s at the point where I don’t even have to try to convince middle schools to do it—has been amazing.

“We’re going to keep rolling and making this effort to recruit some of Georgia’s best students to the University of Georgia,” Brunson also said.