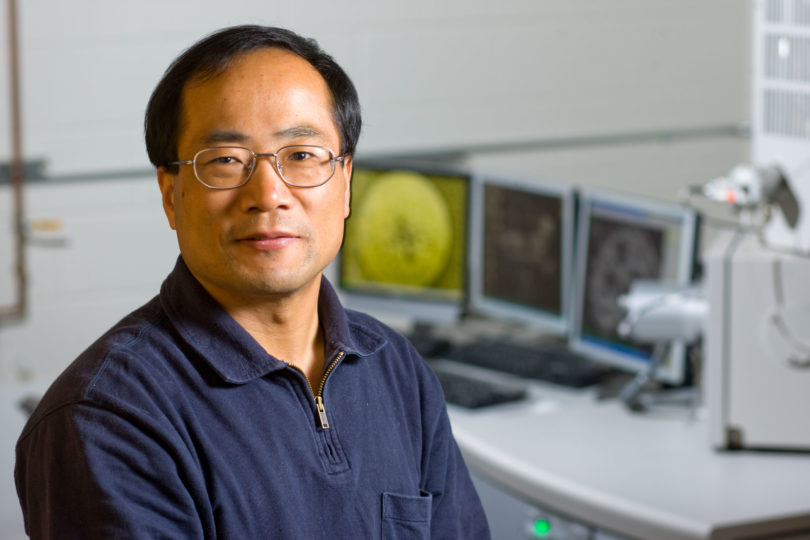 Materials that emit visible light after being exposed to sunlight are commonplace and can be found in everything from emergency signage to glow-in-the-dark stickers. But until now, scientists have had little success creating materials that emit light in the near-infrared range, a portion of the spectrum that only can be seen with the aid of night vision devices.

In a paper published in the January edition of the journal Nature Materials, however, UGA scientists describe a new material that emits a long-lasting, near-infrared glow after a single minute of exposure to sunlight. Lead author Zhengwei Pan, associate professor of physics and engineering in the Franklin College of Arts and Sciences and the Faculty of Engineering, said the material has the potential to revolutionize medical diagnostics, give the military and law enforcement agencies a “secret” source of illumination and provide the foundation for highly efficient solar cells.

“When you bring the material anywhere outside of a building, 1 minute of exposure to light can create a 360-hour release of near-infrared light,” Pan said. “It can be activated by indoor fluorescent lighting as well, and it has many possible applications.”

The material can be fabricated into nanoparticles that bind to cancer cells, for example, and doctors could visualize the location of small metastases that otherwise might go undetected. For military and law enforcement use, the material can be fashioned into ceramic discs that serve as a source of illumination that only those wearing night vision goggles can see. Similarly, the material can be turned into a powder and mixed into a paint whose luminescence is only visible to a select few.

The starting point for Pan’s material is the trivalent chromium ion, a well-known emitter of near-infrared light. When exposed to light, its electrons at ground state quickly move to a higher energy state. As the electrons return to the ground state, energy is released as near-infrared light. The period of light emission is generally short, typically on the order of a few milliseconds. The innovation in Pan’s material, which uses a matrix of zinc and gallogermanate to host the trivalent chromium ions, is that its chemical structure creates a labyrinth of “traps” that capture excitation energy and store it for an extended period. As the stored energy is thermally released back to the chromium ions at room temperature, the compound persistently emits near-infrared light over a period of up to two weeks.

In a process that Pan likens to perfecting a recipe, he and postdoctoral researcher Feng Liu and doctoral student Yi-Ying Lu spent three years developing the material. Initial versions emitted light for minutes, but through modifications to the chemical ingredients and the preparation—just the right amounts of sintering temperature and time—they were able to increase the afterglow from minutes to days and, ultimately, weeks. And they’re still working to improve the compound.

In addition to exploring biomedical applications, Pan’s team aims to use it to collect, store and convert solar energy.

“This material has an extraordinary ability to capture and store energy,” Pan said, “so this means that it is a good candidate for making solar cells significantly more efficient.”