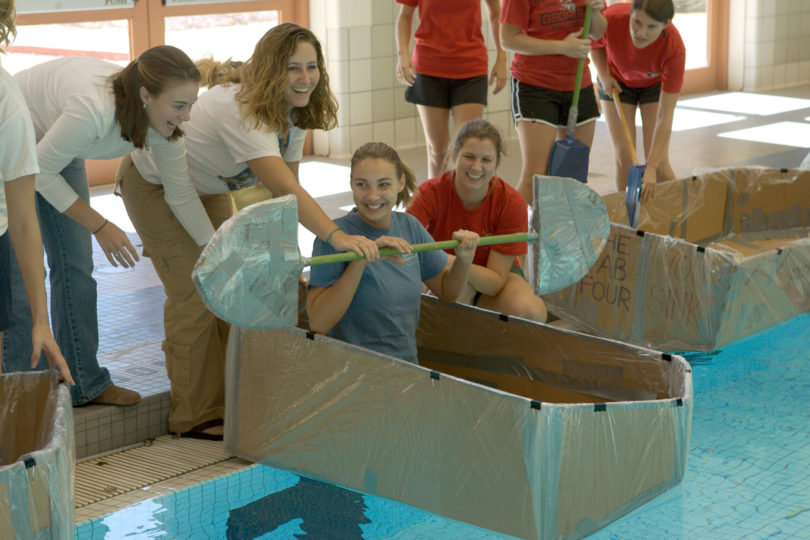 Students prepare to race their boats in the pool at the Ramsey Student Center. The assignment for the Creative Activities for Teachers course was to design and build boats made of cardboard that held at least one team member. The course is being taught by Cameron Denson and Todd Kelley.

A small class of UGA education students stood by the instructional pool in the Ramsey Student Center recently, chatting among themselves and giggling nervously as they awaited their instructors’ signal to launch their cardboard boats.

That’s right. Cardboard boats. The 14 elementary education students had worked in three teams to design and build a boat to hold at least one member of their team to race two other teams the length of the pool. The only materials they could use were 7.5 x 6.5-foot sheets of cardboard, duct tape, plastic tarp and binder clips.

The giggles diminished. The contestants steadied themselves as they gingerly stepped into their boats. After all, they were made out of cardboard. An air of anticipation grew as the class instructor calmly counted down to the race’s start.

With a shove from their teammates, the boats were launched and the students paddled as their boats bobbed up and down in the pool. Some struggled to keep the boat from bobbing too low and taking on water, another had a hard time maintaining course. But when it was finally over, the contestant who had gone solo had won the race.

What, you may ask, do cardboard boats have to do with preparing these aspiring young future teachers for Georgia’s classrooms? Lots, according to UGA graduate students Cameron Denson and Todd Kelley, who are co-instructors of a new class in the College of Education called Creative Activities for Teachers.

“Hopefully, these students will be able to implement these activities or ones like them into the elementary grades,” says Kelley, a first-year doctoral student in technology education. “This will help their students see that technology is not just computers but also critical thinking and problem solving.

“Well, what do you think?” Kelley asks his students after the race. “Remember when we talked about draft? These cardboard boats are lighter than regular boats and sit a little higher in the water so the draft is less. But this one seemed more stable. Why was that?”

“It was wider,” the students answered in unison.

The Boat Challenge is just one of several activities in the class that provides opportunities for students to apply science and mathematics, not to mention common sense.

The class is part of a $10 million multi-institution grant from the ­National Science Foundation that focuses on enhancing engineering and technology principles in K-12 education. The grant has led to the creation of a National Center for Engineering and Technology Education that links four research universities with five technology education institutions, 15 K-12 school districts and three education-related societies, according to Robert Wicklein, co-principal investigator and professor in the College of Education and Faculty of Engineering, the UGA entities involved in the grant.

But back to the boats.

“We studied buoyancy, displacement, draft and boat hull designs before the students started designing their vessels. Then they built a 1-inch = 1-foot scale model from which they were able to calculate the critical load of their full-size boats,” says Kelley. “They (the students) were surprised to find that all the boat design mathematical predictions were well over 600 pounds.”

At first, many of the class members were skeptical about the project, and very few volunteered to be the person in the boat. But like previous projects, the more the students worked on it, the more they got into it, he said.

“Until we did this activity I never would have believed that a person could float in a handmade cardboard boat,” says Jessie Roberts. “I can’t think of any better or more fun way to approach the topic of boats that will result in this much authentic understanding.”

“Constructing these boats together out of real materials and actually being able to test our construction taught me more about how boats float than any textbook ever could,” says Jennifer Johnson.

The course is one of several electives from which elementary education majors must choose to fulfill requirements. Other electives include music education and art education courses.

“Engineering design is a wonderful way to integrate subjects into a real-world connection, allowing students to apply their knowledge more than any textbook question ever could,” says Kelley, who spent nine years teaching technology education in middle and high schools in Indiana and New York.

The hope for the class and the program itself is that it will help generate an interest in engineering, mathematics and science in students at a younger age, says Denson, who taught technology in a Greensboro, N.C., middle school for the past two years.