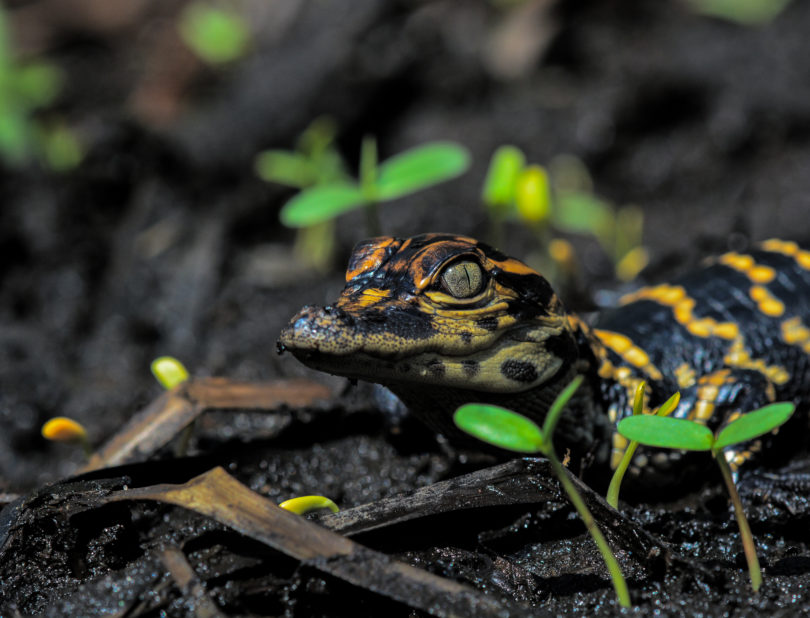 A hatchling alligator at one of the field sites. (Photo by Matthew Hale)

Researchers from the University of Georgia have discovered that timing of exposure is a key factor in how certain contaminants affect the reproductive system—information that may help scientists understand the causes of reproductive disorders in wildlife and women.

Scientists observed many of the negative effects of estrogen-mimicking contaminants on the reproductive system of female alligators living in Lake Apopka, a 50-square-mile lake northwest of Orlando, Florida, that’s contaminated with the pesticides DDT and DDE.

The environment contains contaminants, like pesticides, that mimic the natural hormones produced in the body. The researchers said these contaminants are known as endocrine disrupting contaminants because the chemicals disrupt the organs that control hormone production in both humans and wildlife. 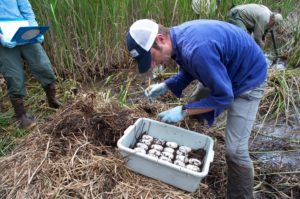 Matthew Hale, a doctoral student at the Savannah River Ecology Laboratory and the Odum School of Ecology, and fellow researchers at the Medical University of South Carolina and Florida Fish and Wildlife Commission, collected alligator eggs from contaminated Lake Apopka and a reference site, Lake Woodruff, approximately 45 miles away.

Eggs from both lakes were equally distributed into an estrogen-dosed group, a testosterone-dosed group and a control group. They were maintained at a temperature that produces female alligators.

Five months after the alligators hatched, Hale and his advisor, Ben Parrott, an assistant professor at SREL and Odum, examined the alligators and found altered gene expression in the estrogen-dosed Woodruff alligators.

The results from the study, published in the journal Biology of Reproduction, indicate that the element of time is an essential factor.

Knowing when the embryos would begin the process of sex determination and at what temperature, Hale and Parrott were able to introduce the treatments at a time that had the potential to influence how the ovary developed.

“We introduced these chemicals that act like estrogen, just prior to sex determination,” Hale said. “If these contaminants act like hormones at the wrong time during embryonic development when hormones are really important for making ovaries or testes, you’re going to have a negative effect on reproduction.”

The pesticides in Lake Apopka, DDT and DDE, are estrogenic organochlorine pesticides that have been known to disrupt the endocrine system because they behave like estrogens, according to the team.

Parrott said these man-made estrogens are found in the egg yolk of alligators from Lake Apopka, passed from the mother to her offspring—affecting the embryo.

In finding the same disturbances in the ovaries of estrogen-exposed alligators from Woodruff as those seen in the alligators from Apopka, the researchers said they’ve uncovered an important piece to the story at Apopka—the timing. Exposure to estrogen-behaving contaminants, before the early phase of reproductive development, can cause problems with reproduction.

The team reports that there were no changes in the alligators that received testosterone.