The University of Georgia Alumni Association will celebrate individuals and organizations that have demonstrated a deep commitment to bettering the university during its 81st annual Alumni Awards Luncheon on April 20.

“During the university’s Honors Week, we take time to celebrate the contributions of distinguished alumni, faculty and friends who commit to UGA every day,” said Meredith Gurley Johnson, executive director of alumni relations. “These award recipients exemplify what it means to identify an area of campus where they can make a difference, and give of their time, talents and treasures. Current and future generations will benefit from their support.”

2018 Alumni Merit Awards
The Alumni Merit Award, which is given to those who bring recognition and honor back to the University of Georgia through outstanding leadership and service, will be presented to Steve C. Jones and William D. Young Jr. 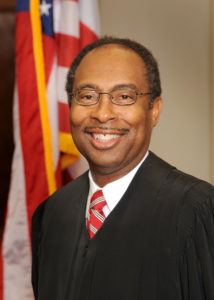 Jones is a 1978 graduate of the Terry College of Business, a 1987 School of Law graduate and has been a public servant in the Athens-Clarke County area for nearly 30 years. He currently serves on the Georgia Supreme Court Chief Justice’s Commission on Professionalism, and was nominated in 2011 by former President Barack Obama to become a U.S. district judge. Jones has mentored numerous law students and volunteers as a managing trustee for the UGA Foundation. He is a past president of the UGA Alumni Association and the UGA Chapter of the National Football Foundation, College Hall of Fame. 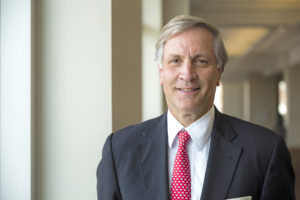 Young is a partner with Atlanta-based General Wholesale Company, one of the largest family-owned beverage distributors in the nation. Young graduated from Terry College in 1978 and has remained involved with his alma mater, recently establishing a Georgia Commitment Scholarship to support need-based aid for students. He has served as a past chairman of the Building Terry campaign and is a former member of the Terry Dean’s Advisory Council. He is also a past chairman of the UGA Foundation, and now serves as chairman of its nominating and governance committee. He received the Terry College Distinguished Alumni Award in 2016 and in 2009, his family was named Family of the Year by the UGA Alumni Association. 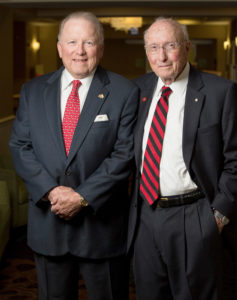 The Benson family will receive the Family of the Year Award, which is presented to a family that demonstrates a history of loyalty to UGA. The Bensons’ journey with the university began a century ago with the late W.H. “Howard” Benson, who founded Benson’s Bakery in Athens. In the 1950s, Benson’s Bakery recruited UGA students to sell fruitcakes across the country to civic organizations. Today, Benson’s Inc. is the parent company of Benson’s Bakery and Benson’s Hospitality Group.

Most recently, the family changed the university landscape by naming Benson Hall in the new Terry College Business Learning Community. The building is named for patriarch W. H. “Howard” Benson; his son, the late H.E. “Ed” Benson, who graduated from Terry in 1942; and grandson Larry R. Benson, who earned a degree from Terry in 1974. The Bensons’ latest contribution to UGA will leave a lasting landmark on campus that reflects the connection between the family’s Athens-based company and the university. 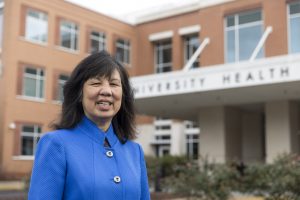 Dr. Jean E. Chin is receiving the Faculty Service Award. First presented in 1969, the award recognizes current or former UGA faculty and staff who have distinguished themselves in service to the university.

Chin recently retired as executive director of the University Health Center where she led a team dedicated to the health and wellness of UGA’s more than 35,000 students. Under her leadership, the Health Center established the Fontaine Center to provide alcohol and other drug prevention services to the campus community. She graduated from UGA in 1978, joined the medical staff in 1988 and served as medical director from 1992 to 2004. In addition to her administrative role, she teaches as a part of the Augusta University/University of Georgia Medical Partnership. She graduated from Tufts University School of Medicine; completed an internal medicine residency at Westchester County Medical Center; and earned her MBA at Kennesaw State University in 2001. She is board certified in internal medicine. 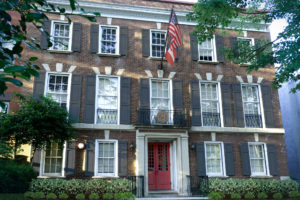 Delta Air Lines will be honored with the 2018 Friend of UGA Award, which is given to any non-alumnus or organization that has demonstrated outstanding loyalty and support to the University of Georgia and the UGA community.

Delta Air Lines has invested in UGA for over 40 years, with more than $6.2 million in financial support provided by the company. The Delta Air Lines Foundation committed $5 million to create Delta Hall, a living and learning community on Capitol Hill.

In addition, the Delta Visiting Chair for Global Understanding in the Willson Center for Humanities & Arts, has brought renowned authors to campus, including Alice Walker and Colm Toibin. Delta has provided in-kind donations to a number of campus departments and the company is a leading employer of UGA graduates, landing in the top 25 for the Class of 2016. 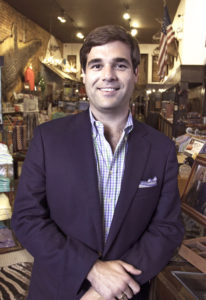 The Young Alumni Award will be presented to Thomas J. Callaway IV, who is the founder and CEO of Onward Reserve. This award is given to those who attended UGA in the past 10 years, have embodied the Pillars of the Arch—wisdom, justice and moderation—and provided notable service to the university.

Callaway graduated from UGA in 2007 with a degree in finance. He is president of the UGA Alumni Association Young Alumni Leadership Council, and a past 40 Under 40 and Bulldog 100 honoree. He frequently returns to campus to speak to students in Terry College and the College of Family and Consumer Sciences. Callaway gives to Terry College, the State Botanical Garden of Georgia, UGA Athletic Association and the Georgia Fund.

More information about the 2018 Alumni Awards Luncheon and a list of previous award recipients is online.