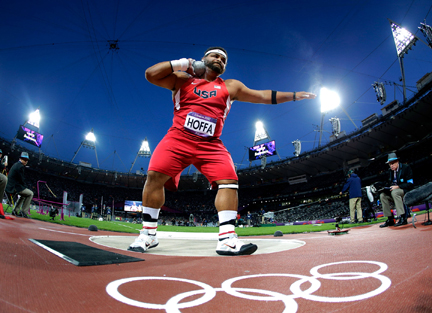 UGA alumnus and U.S. shot putter Reese Hoffa won the bronze medal at the 2012 Summer Olympics in London earlier this month. Before Hoffa headed back to international competition in Sweden, followed by trips to Poland, Switzerland, Germany and Croatia, Columns spoke with him about his Olympic experiences—including rubbing elbows with NBA All Stars—his continued ties with UGA and his plans for the future.

Columns: You’ve been to the Olympics twice before. Other than medaling for the first time, what stands out to you about the London Olympics?

Hoffa: I definitely had more fun. I got to meet more athletes than I thought I’d ever get to meet. I got to meet pretty much the entire basketball team: Tyson Chandler, Chris Paul. It definitely was pretty cool.

I got to be on TV. My plan of standing right by the basketball players (during the opening ceremony’s parade of athletes) played out perfectly. NBC, of course, focused on them and indirectly put me on TV, too. I gave myself a good 6 feet of distance between me and the (basketball) stars. So when they did the camera shot, it looks like I’m directly behind them.

Columns: How did you feel about your overall performance at the games?

Hoffa: I’m reasonably happy with it. When you train as long as I have, you always have these dreams of ultimate world domination and you’re trying to bring home a medal. But when you win any medal at all, your whole perspective on the color doesn’t even matter. Just bringing home a medal is the important thing.

Columns: Where is your medal now?

Hoffa: It’s in my house on my night stand now. We’ll put it somewhere secure. I’ll try to hide it the best I can, but there are people who want to see. I try to make a point if I’m doing an appearance to keep it on—if I’m going to a restaurant or something.

Columns: How do you think your experiences at UGA helped prepare you for the Olympics?

Hoffa: First off, I have to give a lot of kudos to the athletic training staff. They have made all the difference in the world. When UGA allows you to have access to them, it definitely helps you out a great deal to stay healthy.

When you have a university behind you 100 percent wanting to see you succeed, you can’t help but be successful.

Columns: After your upcoming international competitions, what’s next?

Hoffa: I’ll do a tour that pretty much takes me to most of the schools in Athens and Oconee County. Then I’ll go back to Augusta and go from Evans to Harlem to Grovetown and hit all the schools there.

In between all that, I have (UGA football) season tickets. My ultimate goal is to watch Georgia win the (SEC) East and make their way to the SEC championship game, and have the game of their lives to make it to the national championship.

Long term, I’m thinking about two more years of competitive shot-putting on the professional scene. In between those years, I’ll be working on my (Georgia teacher certification).  And
I hope to get a teaching position somewhere in Athens, Oconee, the closer parts of Gwinnett, hopefully being a P.E. teacher in high school.

Columns: So London was your last Olympics?

Hoffa: As far as I can tell now. Unless for some reason my wife tells me, “You should continue to throw. You’ve still got some good years left in you.” As long as she’s 100 percent behind me, I’ll continue to throw a little longer. But I feel like I need to put some kind of end date on it, so I’m working toward something.

I’ve been throwing a 16 pound ball for the better part of 15 years. I’m not really tired of doing the same thing all the time, but the motivation at the beginning of the (season) every year is very, very hard.