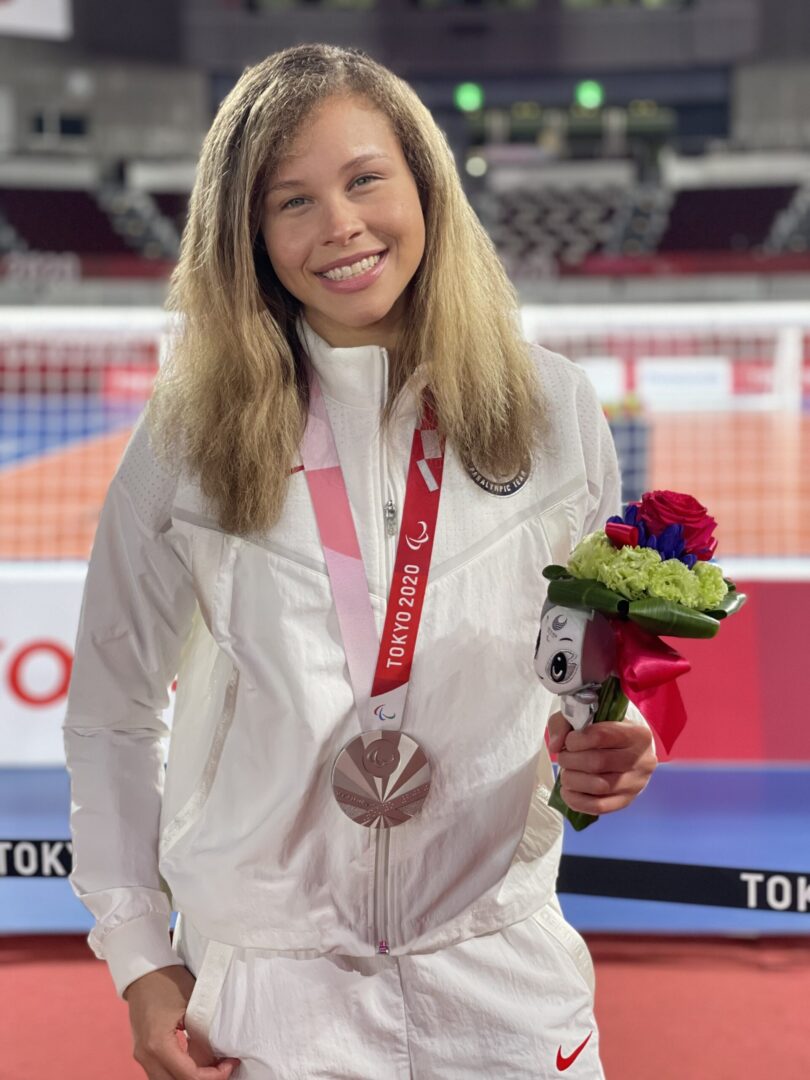 Amanda Dennis BSEd '19 is a three-time Paralympian and two-time medalist in goalball, a sport specifically designed for athletes who are visually impaired. Dennis and her teammates won silver at the 2020 Tokyo Games, where Dennis was the tournament's third-leading scorer.

It’s the moment athletes train for. The ball is in your hand. The game is on the line. Win or lose, it’s up to you.

With 18 seconds left in Team USA’s goalball semifinal against Brazil at the Tokyo Paralympics, the Americans were down, 2-1, and Amanda Dennis held the ball. A three-time Paralympian at 27 and a bronze medalist at the 2016 Rio Games, she understood pressure.

And she slapped it aside.

With a spin and roll that approached 50 mph, Dennis BSEd ’19 rocketed the ball past the Brazilian defenders and into the net, tying the game and sending it into overtime. Eventually, it went to a shootout, where a Dennis goal would put the Americans ahead and propel them into the gold medal game.

Unfortunately, she missed that contest, which was won by Turkey. It wasn’t public at the time, but Dennis had been playing through two separate injuries, and she needed several weeks to recover after the Games.

Dennis is already looking ahead. “I think our path is really clear. Bronze in Rio. Silver in Tokyo. Paris?” Dennis says, leaving the host city of the 2024 Paralympics and the Americans’ unfinished business hanging in the air.

The Goal of Goalball

Goalball is specifically designed for athletes with visual impairments. Dennis was introduced to it at a camp sponsored by Blaze Sports America when the Peachtree City native was 7 years old. Teams of three players on each end of the court take turns hurling a nearly three-pound ball about the size of a basketball toward goals spanning the width of the court. Players track the ball using only the sound of bells inside it while throwing their bodies in front of it to stop it.

Players have a half-second to react from the moment a ball is thrown to when they can block it.

“You have to have good spatial awareness,” Dennis says. “You have to sense where people are; your reflexes and lateral movement have to be fast. You need speed and power, and, of course, your hearing has to be good. And you have to always be willing to learn something new.”

While she has some vision, Dennis was born with two genetic conditions, anirdia and nysagmus, that render her legally blind. On the court, her eyes are covered with patches, and she wears an eyeshade to level the playing field with the athletes who have no vision at all. 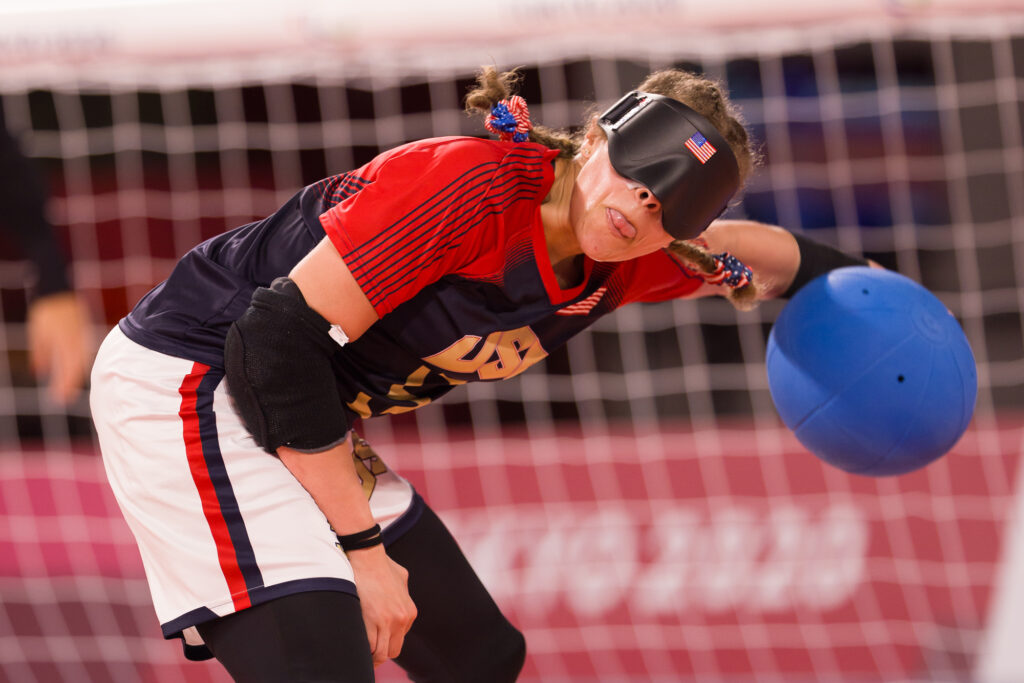 Amanda Dennis’s throws can reach speeds up to 50 miles an hour. When she’s locked in, Dennis wags her tongue like Michael Jordan. It’s a habit she picked up as a youngster. Dennis laughs about it now, but she refused to believe she did it until she was shown a picture of herself on the court. (Photo by Michael A. Clubbing/Wheelchair Sports USA)

Dennis was already a world-class athlete when she came to UGA in January 2013. She was acquainted with kinesiology professor Kevin McCully, who wanted to help Dennis with her conditioning. He introduced her to Lauren Peterson Higgins MS ’14, who was working toward her master’s in exercise physiology. For the next two-and-a-half years, Higgins served as Dennis’s strength and conditioning coach. For Dennis, who had previously trained on her own, it was a revelation.

“With visually impaired people, you can’t just say, ‘Go do that, then do this,’” says Dennis, who graduated with a bachelor’s degree in sports management. “Lauren had to describe things in ways that helped me visually picture them in my head. I could never be more thankful to her and to Dr. McCully.”

Dennis is one of the top goalball athletes in the world, and she plays with some earned swagger. She left Tokyo as the top American blocker and the tournament’s third-leading scorer. As a left-handed thrower, her ball moves differently than a righty, which gives her an advantage on offense. On defense, she plays center, the most important position. And when she’s locked in, she wags her tongue, a la Michael Jordan. It’s a habit she picked up as a youngster and jokingly refused to believe she did until she saw it on television.

When you host a Paralympics, you are impacting people who may be disabled. Those who don’t know anything about the game. I want to be the person who inspires them.” — two-time Paralympics medalist and UGA alumna Amanda Dennis, already thinking about the 2028 Paralympics in Los Angeles

Dennis trains and competes in club ball in Germany, where she lives with her husband, German Paralympic goalball athlete Michael Feistle. She regularly returns to Team USA’s base in Fort Wayne, Indiana, to work with the national team. Without a doubt, the 2024 Paralympics in France are front and center in her mind, but it’s the 2028 Games in Los Angeles that will be particularly special for Dennis.

She wants to play on her home court in front of family, friends, and—intriguingly—even people she has yet to meet. “When you host a Paralympics, you are impacting people who may be disabled. Those who don’t know anything about the game,” she says. “I want to be the person who inspires them.” 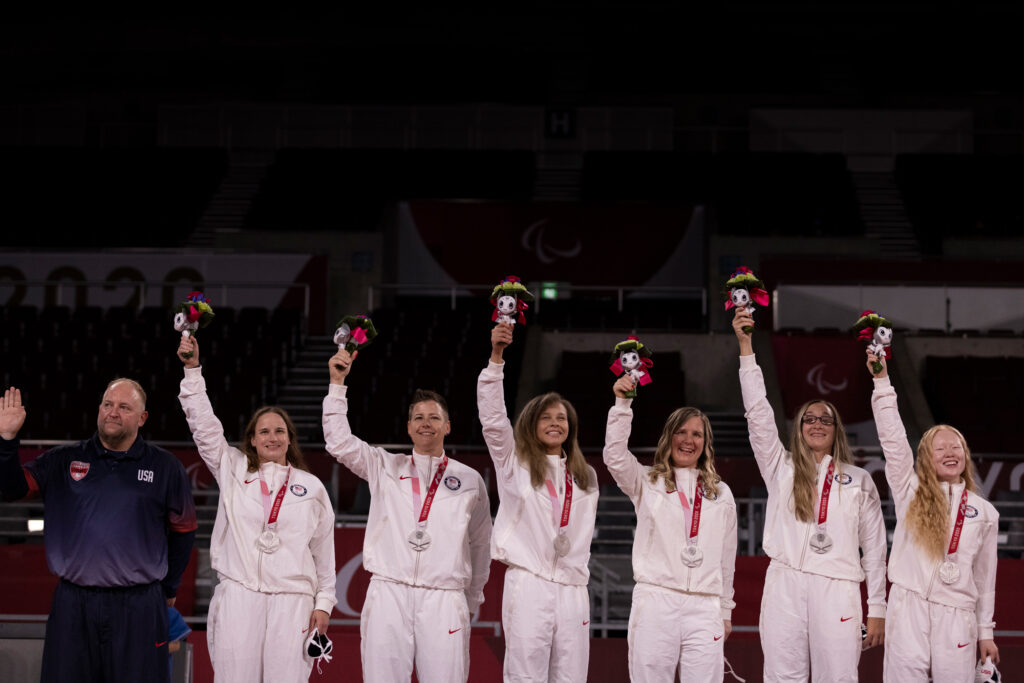 Amanda Dennis, third athlete from the left, with her teammates on the podium as they receive their silver medals at the 2020 Paralympics. (Photo by Joe Kusumoto)