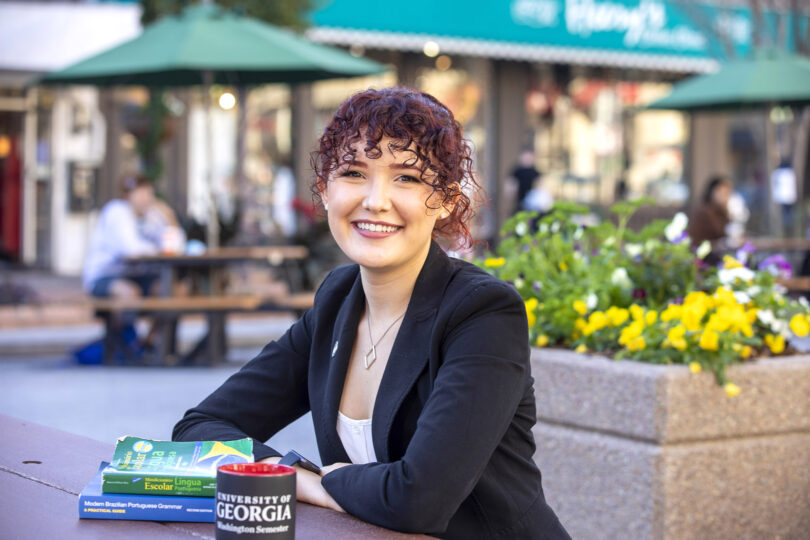 During her time at the University of Georgia, Allison Reid has lived on three continents in five different cities. A senior from Canton, Reid was “determined to take advantage of everything the university had to offer me.” She studied in the United Kingdom and twice went to Brazil. She’s even interned at the U.S. State Department. Through it all, she’s learned not be afraid of change.  “Almost all change is good change,” she said.

Degree objective:
criminal justice, international affairs and sociology with a minor in Portuguese

Family ties to UGA:
My younger sister, Anna, is a sophomore history major.

I chose to attend UGA because:
I was attracted to the large variety of courses at UGA. While other universities specialize in certain areas, I really loved that UGA seemed to offer everything. I felt like UGA would offer me endless opportunities, and it did. I have done more than I imagined possible during my undergrad degree.

How did you choose your major?
I intended to major in journalism at UGA when I applied, but, during my senior year of high school, I did a community relations internship with the Canton Police Department that inspired me to instead focus on criminal justice and international affairs. So, even before I had walked on campus, I had changed my majors. I got into my international affairs and criminal justice course and fell in love with both fields. My sophomore year, I became very interested in the sociological aspects of criminal justice, so I added the third major to my degree. 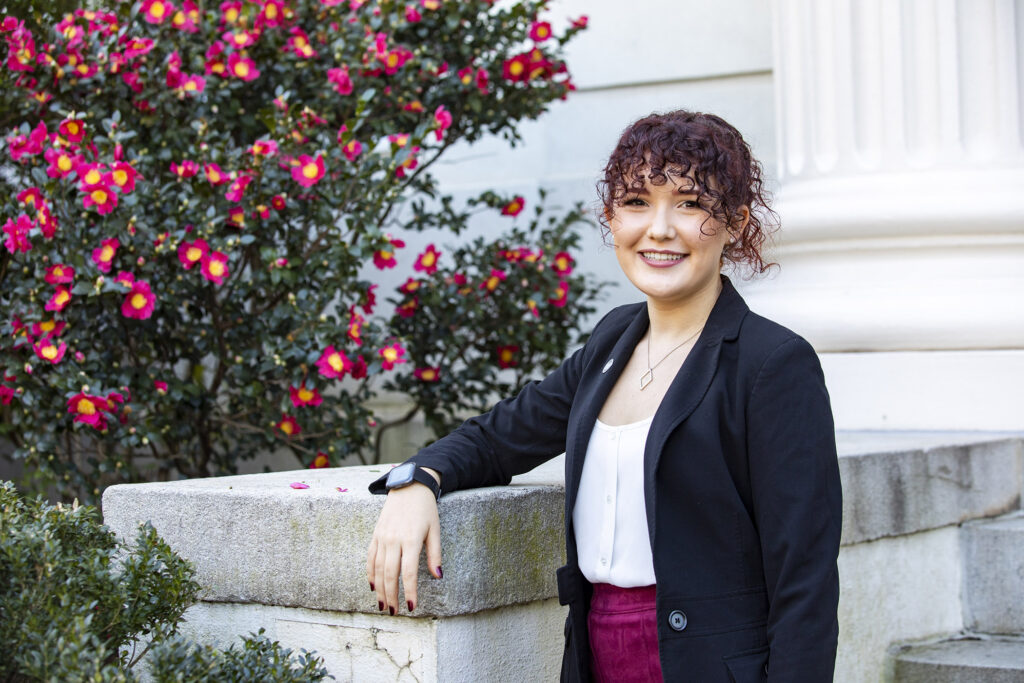 Allison Reid accomplished “more than I imagined possible during my undergrad degree.” After graduating in May, she’s considering graduate school before pursuing a career in public service. (Photo by Dorothy Kozlowski/UGA)

Top university highlights, trips, internships, achievements, awards and scholarships:
When discussing my time at UGA with Don DeMaria, the director of the Washington Semester Program, he joked that I must not like Athens very much. I, of course, denied his claim vehemently. I love the Dawgs! Still, I will admit, reviewing the programs I have done, the travels and the internships, I have not spent very much time on UGA’s campus. In response, I told him my favorite thing about UGA was that there seemed to be endless opportunities to pursue, and I was determined to take advantage of everything the university had to offer me in four short years.

Study abroad experience
My freshman year of UGA, I went to the U.K. through the GLOBIS Liverpool study abroad program. I learned all about the justice system in the U.K. and across the world. This trip married my international affairs and criminal justice majors, and I have focused my studies on global justice ever since.

My sophomore year, I traveled to Florianopolis, Brazil, for an intensive language study program. There, I lived with a wonderful host family and gained a deep understanding and appreciation of Brazilian life and culture.

My junior year, I took part in the 10-month Flagship Program Capstone in Brazil. After about a month in Brazil, I was evacuated back to the U.S. Unfortunately, the program was suspended due to COVID-19. Although I wasn’t able to get the fully immersive language experience I had worked so hard for, I remained committed to Portuguese fluency, despite institutional and programmatic challenges. I learned greater flexibility, resiliency and adaptability thanks to that experience.

I have had the opportunity to live in two new continents and five different cities as an undergraduate. As someone who was born and raised in Georgia, it was a whirlwind of new experiences. My time in Liverpool, England, taught me how constructed our society’s attitude towards crime is and how much it can change. My trips to Brazil, first in Florianópolis and then in São João Del Rei, gave me a deeper appreciation of life and family. In Washington, D.C., I experienced the rapid speed of political life and met people dedicated to good governance and public service. Finally, in my second home, Athens, I got to experience a college town, being a part of UGA’s Model U.N. and volunteering with the Guide Dog Foundation for the Blind. 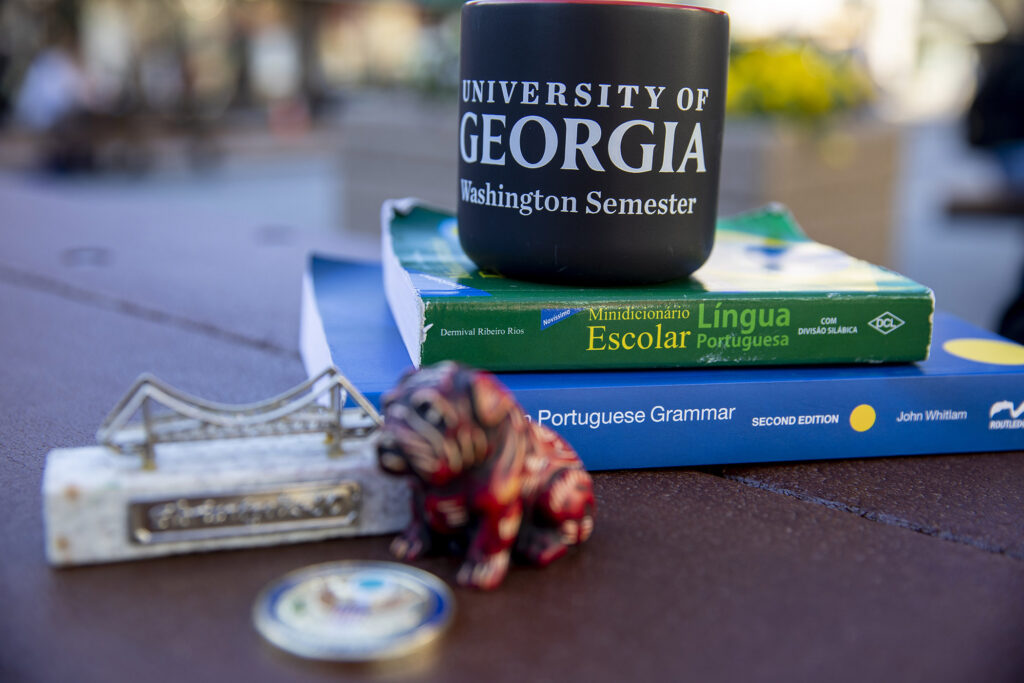 Allison Reid’s souvenirs from her UGA experiences include a mug from the UGA Washington semester program, Portuguese textbooks from her trips to Brazil, a red bulldog from an artisan market in Washington, D.C., a medallion from her internship at the U.S. State Department, and replica of the landmark bridge in Florianópolis, Brazil. (Photo by Dorothy Kozlowski/UGA)

Internship
I interned for the U.S. State Department and gained a lot of perspective on how the U.S. conducts foreign relations from the diplomatic angle. We really focused on how we could treat other countries as partners in pursuit of common security goals. Since my bureau focused on the Western Hemisphere, I was able to work on capacity building programs for Latin America, using both my Portuguese and Spanish language skills.

My time at UGA has been filled with adventure, and I am so grateful to my parents, my friends, mentors and professors for always supporting those dreams. My parents were always there for me when I needed to work through something. Elizabeth Hughes, Ned Phares, Kathleen Schmaltz and Don DeMaria have been vital mentors for everything from scholarship essays to life advice. I have had too many exceptional professors to name, but I do want to thank Susan Haire, Robert Moser and Josh Darnell for their exceptional classes and many wonderful letters of recommendation. I know, for certain, that I would not be the woman I am today without their generosity. 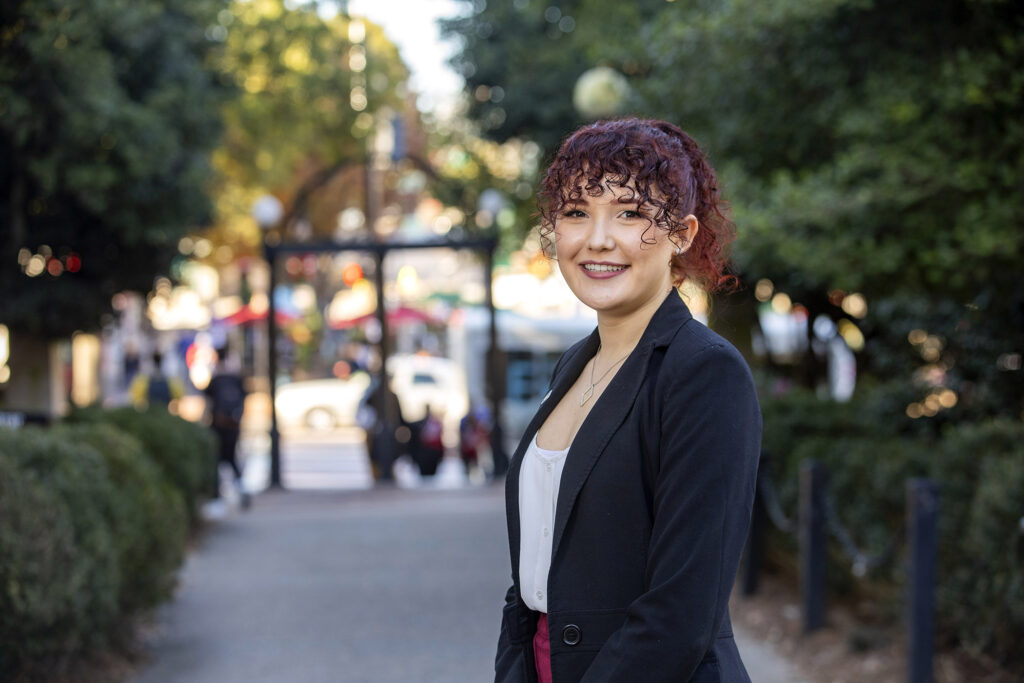 What advice would you give your younger self?
I would tell my younger self to not define herself by her achievements and to not be afraid of change. I think as college students, we tie our degrees so much to our identities that we lose touch with who we are outside of it. I also changed so much with each semester and new experience, and it took me a while to get used to such rapid development. I think my past self would benefit from knowing that almost all change is good change.

My favorite professor is:
Susan Haire. I met her on my first study abroad trip to Liverpool, and she has been a resource and mentor ever since. She is quick-witted, brilliant and exceptionally kind. I could have asked for no better department head for my criminal justice major. She has always encouraged me to take on new challenges and endeavors.

My favorite things to do on campus are:
Work at the UGA Law Library, eat pizza from ECV and walk around the North Campus gardens.

My favorite place to study is:
The third-floor reading room in the Main Library. The big windows overlook the quad, and the big comfy chairs are perfect for studying … or napping.

If I could share an afternoon with anyone, I would love to share it with:
Ruth Bader Ginsberg. I had the opportunity to see the Notorious RBG speak in fall of 2019 while I was in Washington, D.C. She was everything one imagined her to be. Her passing last year was terribly sad for the nation and world. She was a trailblazer and icon to so many young women like me. I would have loved to spend an afternoon with her asking her about her experiences. Rest in power, RBG. 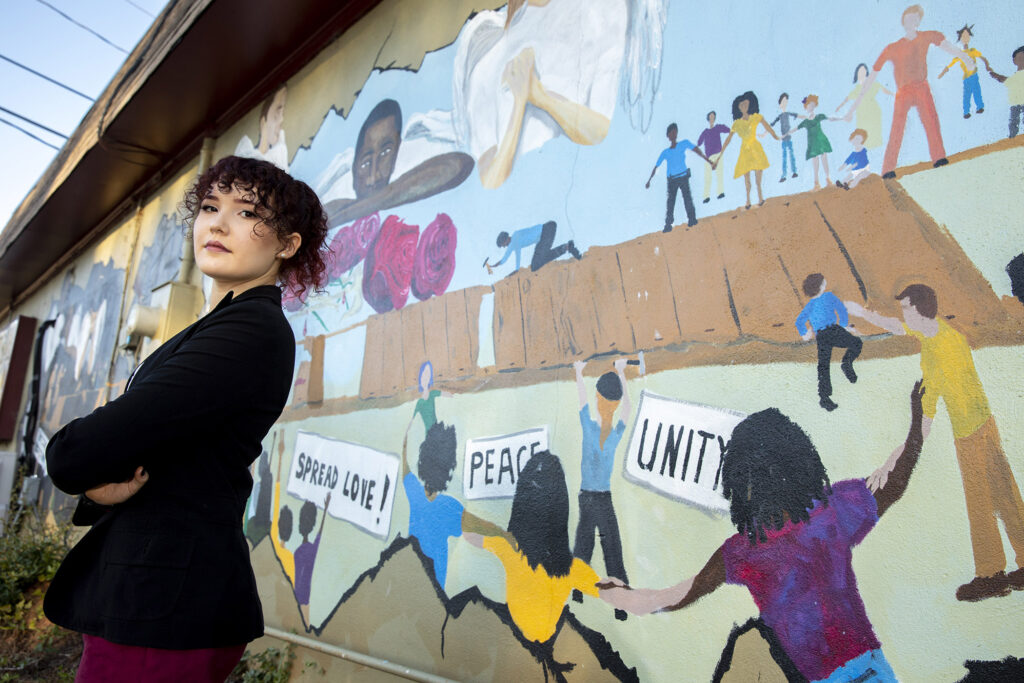 Allison Reid is interested in criminal justice reform domestically and internationally. She is pictured at the “Building Bridges” mural depicting the growth and improvement of police and community relations. (Photo by Dorothy Kozlowski/UGA)

If I knew I could not fail, I would:
Reform the U.S. justice system.

What is your passion and how are you committed to pursuing it?
I am really interested in criminal justice reform domestically and internationally. Even though I have three majors, I focus all my independent projects on this subfield. I hope to one day work in a career related to my passion.

After graduation, I plan to …
Attend graduate school to study security before pursuing a career in public service.

I #CommitTo:
Wisdom, Justice and Moderation (Pillars of the Arch)