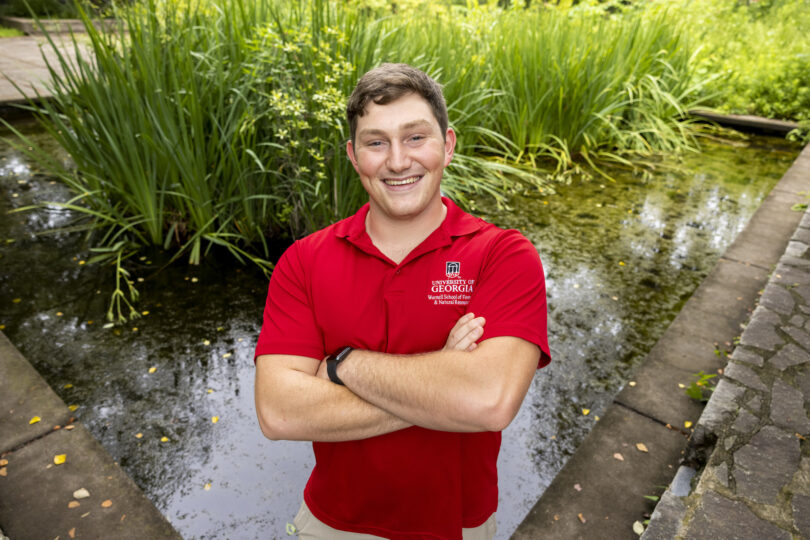 Seamus O'Brien, a student in the Warnell School of Forestry and Natural Resources, poses by the Mary Kahrs Warnell Memorial Garden and Pond. O'Brien regularly handles turtles and terrapins as part of his school and volunteer work. After graduation he plans to attain a Ph.D. and become a research biologist. (Photo by Dorothy Kozlowski/UGA)

Forest resources major works to protect ecosystems and their inhabitants

Fun fact about me:
I have lived in five different states and in Ireland.

What is your favorite class you’ve taken?
The best class I have taken by far was the Fisheries Maymester at the Warnell School of Forestry and Natural Resources. We got to sample fish from mountain streams to the coast while camping across Georgia. Our classroom was the field, and we took notes and quizzes while sitting in streams and on boats. I learned a ton about the fish and the ecosystems we were in. In the Piedmont, there is a fascinating array of fishes including darters, chubs, suckers, catfish, madtoms and shiners in creeks only a few feet wide. The fish in the mountains were beyond colorful and stunning too. It was mind-boggling how these little cold streams boasted such a wide variety of fish and animals of all different sizes, morphology and life histories. We witnessed fiery tangerine darters, a state endangered animal, alongside giant hellbenders. Swimming with redhorse, a group of suckerfish, we learned about their epic migrations and relationships with many endangered freshwater mussels. On Sapelo Island, the class delved into marshes and beaches, where we saw 27 species of fish. In addition to these experiences, the professors and TAs were beyond passionate, caring and knowledgeable.

What has surprised you about UGA or defied your expectations?
The thing that has surprised me the most is how much hands-on experience UGA has to offer. Almost all my classes have had opportunities to do real-world things and apply them. From creating maps, setting up sampling surveys, identifying organisms to analyzing data and writing code in the classroom, I feel like I have a grasp on my professional field and applicable experience that I can use to pursue a career in it. 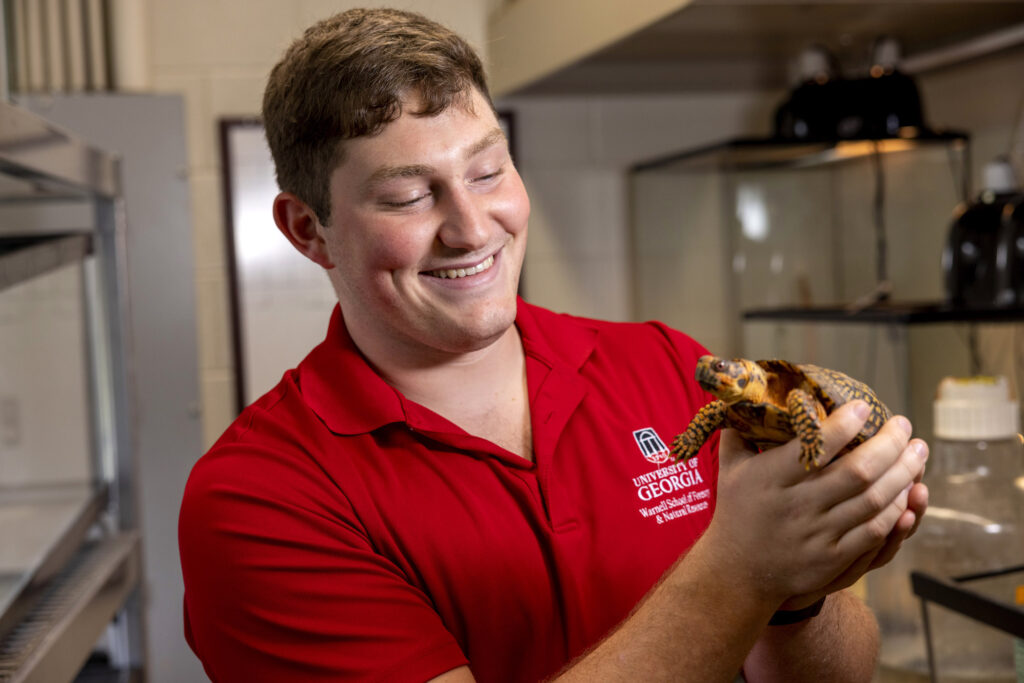 Seamus O’Brien, a junior from Ireland majoring in fisheries and wildlife, holds a box turtle named Scotty in the Maerz Lab. (Photo by Dorothy Kozlowski/UGA)

What are your top UGA highlights?

As soon as he could walk, Seamus O’Brien was catching snakes, frogs and turtles. Now a @UGAWarnell student, Seamus studies those same animals and works to protect ecosystems. After graduation, he plans to become a research biologist. 🐢 https://t.co/3W9UfEyQkF pic.twitter.com/EPsPn6XYB0

How did you decide to come to UGA?
I first decided to come to UGA after meeting professor John Maerz at a herpetological outreach event. The study and conservation of the natural world and herpetology always enthralled me, but I never thought that I would be able to do it as a career. When I met professor Maerz he opened my eyes to all the career possibilities at UGA. I could pursue my passions and have a fulfilling job after college that would allow me to make an impact in the world. No other college I visited had any programs that excited me like Warnell, so the decision to come to UGA was a no-brainer.

How did you choose your major?
I chose my major, wildlife science, due to my passion for herpetofauna. As soon as I could walk, I was catching snakes, frogs and turtles and getting lost in books on them. The more I read and researched, the more I realized that many of the animals I was passionate about, especially turtles and tortoises, are imperiled. This major allows me to pursue careers that will make an impact long after I am gone.

Where have you interned/what have you learned?
I have done a fisheries internship at Warnell for faculty member Brian Irwin. It was an online internship researching a species of suckerfish known as robust redhorse (Moxostoma robstum). My task was to find information on the species and compare it to a few similar species of redhorse. Redhorses are important because of their historic migrations across the south. They are sometimes called the “salmon of the south” due to the ecological impact their spawning has on riverine environments. I learned about population studies, basic ecology, and how to analyze hundreds of research papers. I also learned how to work in an online environment. This internship coincided with the COVID-19 pandemic, which taught me how to adapt to navigate a virtual workplace. 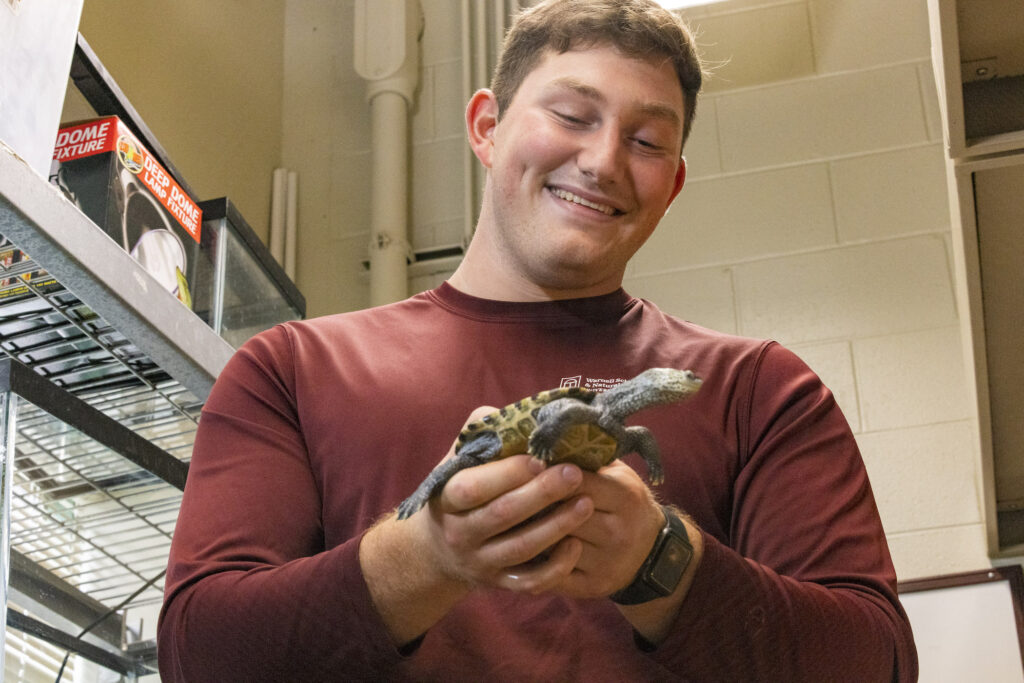 Seamus O’Brien, the undergraduate co-chair for the UGA Herpetological Society, holds a diamondback terrapin in the Maerz Lab. (Photo by Dorothy Kozlowski/UGA)

What advice would you give to your younger self?
I would tell myself to keep my mind open and that some of my best memories have come when I least expected them.

What obstacles have you had to overcome?
Coming to UGA was difficult for me. I suffered a severe concussion in high school that rendered me unable to walk or talk well for two weeks initially after the injury. I ended up missing three months of school and that set me back mentally and academically. After learning about the amazing things I could pursue at UGA, I worked as hard as possible to come here. I ramped up my academic rigor and got very involved in sports and extracurricular activities not only out of interest but also to try and better myself so that I could come here and make my dreams come true. It was stressful, challenging, but rewarding to push myself as hard as possible and overcome my setbacks to come to UGA, but I learned a lot. I learned what it’s like to truly push myself and that prepared me for the rigor at UGA.

What is your passion and how are you committed to pursuing it?
My passion is to live a life devoted to something greater than myself. I am pursuing that through conservation to protect ecosystems and their inhabitants that have no voice.

What are your plans for after graduation?
I plan to attain a Ph.D. and become a research biologist.

I #CommitTo: Experience.
Experience is the best way to immerse yourself in an environment, learn about it, and in turn, conserve it for future generations.