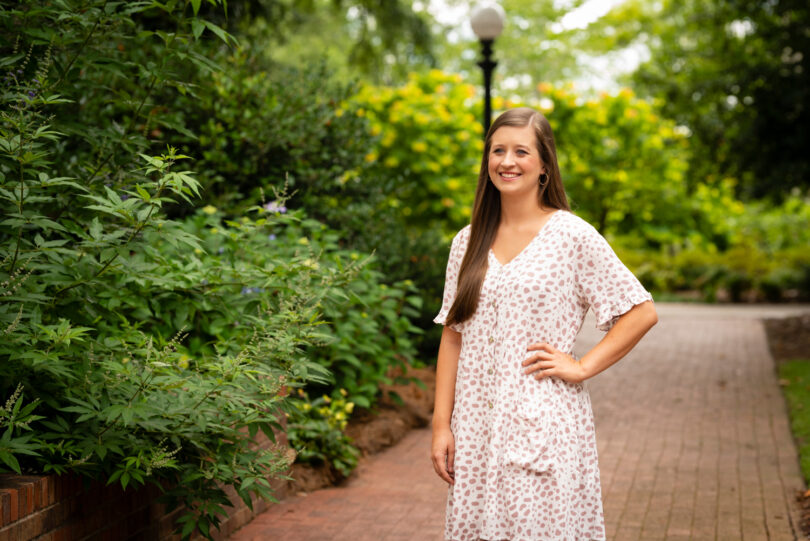 A Georgia Commitment Scholarship helped Ana Kilgore attend UGA. The mathematics major has made the most of her opportunity, and the academic and community roles she's dedicated herself to have defined her time on campus. (Photo by Edwin Hammond)

Through the Georgia Commitment Scholarship program, the generosity of alumni is helping UGA students reach their goals

One of only 75 people in her high school graduating class, Ana Kilgore always dreamed of expanding her horizons. When she saw the range of STEM programs offered at the University of Georgia, the Hawkinsville native set her sights on Athens.

But to get here, she faced the financial cost of living away from home.

“If it weren’t for the scholarship, I wouldn’t be at UGA,” Kilgore says. “It really changed my life.”

Renewable for up to four years during her time at the university, the Georgia Commitment Scholarship provided Kilgore the opportunity to join the Dawg Nation.

She came to the university with a love of numbers and a passion for helping people. She’s become involved in multiple units around campus since then, including the Department of Mathematics, the Division of Academic Enhancement, and the Office of Service-Learning. These activities have defined her time as a UGA student.

“UGA draws you in and gives you a support system while at the same time pushing you toward internships and opportunities,” Kilgore says. One of her most meaningful volunteer roles has been with Experience UGA, an organization whose goal is to bring every K-12 Athens-Clarke County student to UGA’s campus through annual field trips.

Prior to the pandemic, Kilgore worked one-on-one with local students to facilitate tours and talk with them about their college plans. “Coming from a small town, I didn’t get to see what big universities had to offer, so it’s cool to be able to bring kids to campus and let them see for themselves what it’s like.”

College is a really important time in a person’s life. That extra support can push someone to be successful, try new things, and feel like they can achieve their dreams.” — Ana Kilgore, fourth year, mathematics

Kilgore sees a reflection of herself in some of the students she meets. “Even though they live in Athens, they might feel like UGA’s not really an option for them. It’s nice to be able to say, ‘I came from a small community, and I felt the same way. But UGA is absolutely a possibility for you.’”

Bill Young BBA ’78, a partner with Atlanta-based General Wholesale Company and a UGA Foundation trustee, funded the Georgia Commitment Scholarship that Kilgore received. She and Young met for the first time during her second semester. Now,experience UGA she keeps in touch through letters and emails, sharing important milestones as she prepares to graduate in December with a bachelor’s degree in mathematics and a certificate in actuarial sciences.

“College is a really important time in a person’s life. That extra support can push someone to be successful, try new things, and feel like they can achieve their dreams,” she says.

Kilgore embraces giving back and encourages others to do the same. “You can make such a big impact when you reach out to others. Even if I’m not in a place to give back monetarily, there are other ways I can, like spending time with younger Scholars and helping them the way others have helped me.”