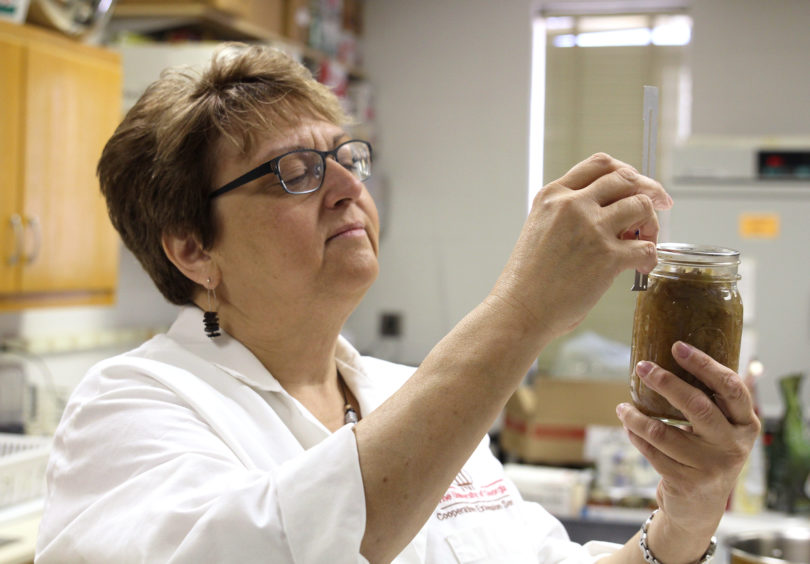 Elizabeth Andress measures the headspace on a jar of relish that she is canning in her lab on the University of Georgia campus. (Credit: Cal Powell/UGA)

Elizabeth Andress, director of the National Center for Home Food Preservation housed in the UGA College of Family and Consumer Sciences, said spores of Clostridium botulinum, the bacteria that cause the disease, are extremely heat resistant and can survive even hours in boiling water.

If left alive after canning, the spores will eventually produce a potentially deadly toxin.

“The bacteria like the conditions inside closed jars of low-acid foods, such as vegetables and meats, sitting at room temperature, so they must be killed during the canning process for safe storage,” Andress said.

In Lancaster, Ohio, a 54-year-old woman died and at least 20 people have confirmed cases of botulism following a potluck luncheon at the Cross Pointe Free Will Baptist Church on April 19.

At least 10 others reportedly are being monitored by the Ohio Department of Health for showing symptoms consistent with botulism. Health officials reported the cause of the outbreak in Ohio to be a potato salad containing home-canned potatoes.

According to the Centers for Disease Control and Prevention, about 145 cases of botulism are reported each year in the U.S.

Foodborne botulism can be prevented by following proper canning techniques and using the right equipment to avoid contamination, Andress said.

For example, canning low-acid vegetables, meats, fish and poultry requires the use of a pressure canner, she said.

Andress gives these other tips for safe food storage:
• Use up-to-date, science-based home canning procedures, such as those found in the “So Easy to Preserve” book from the University of Georgia (http://setp.uga.edu/), or on the National Center for Home Food Preservation website (http://nchfp.uga.edu/)
• Do not taste or eat foods from cans or jars that are leaking, have bulges, are swollen, look damaged or cracked or seem abnormal in appearance or odor. Do not use products that spurt liquid or foam when the container is opened. While botulism may not cause all these problems, they do indicate that processing was not correct to prevent the disease.
• Do not experiment with canning your own recipes for soups, salsas or other mixes of vegetables, even if tomatoes are included. The mixtures could be low enough in acid to support production of botulinal toxin, and you can’t determine your own processing times even if you use a pressure canner.
• All pickled and fermented foods to be canned in boiling water canners must be acid enough to prevent botulism (pH less than 4.6), so use properly developed and tested recipes and procedures. Not all foods that taste pickled will be below pH 4.6.
• Remember that even some non-canned foods can cause botulism if they are time-and-temperature abused. Homemade garlic or herb oil mixtures should be kept refrigerated and used within a week, according to the FDA.
• All cooked low-acid foods should be held above 140 degrees or refrigerated to 40 degrees or less within two hours after cooking (one hour if the temperature is above 90 degrees).
• If you followed sound directions, but have any doubt that your canning procedures were carried out flawlessly, you can boil home-canned, low-acid foods for 10 minutes prior to consuming or serving. For higher altitudes, add one minute for each 1,000 feet of elevation.