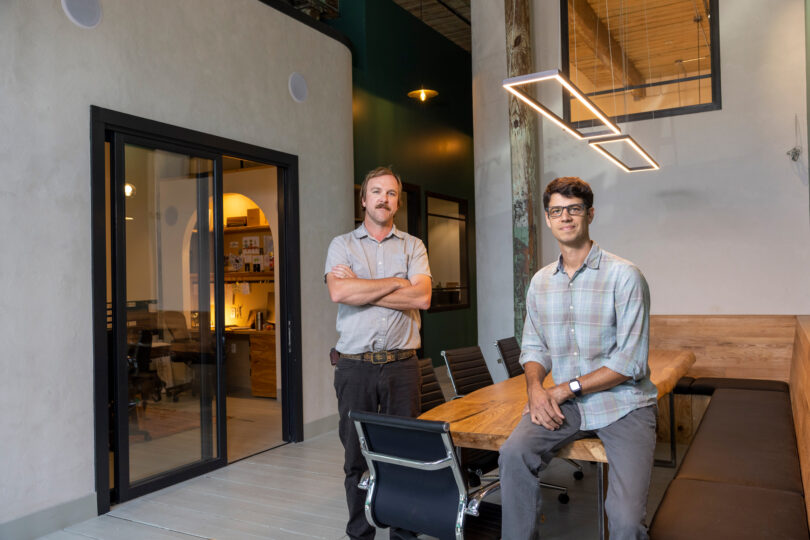 Andrew Malec and Zack Brendel are the co-founders of Character Built, a construction and design group based in Athens. (Photo by Peter Frey/UGA)

Andrew Malec ABJ ’04 was planning to go into photojournalism after he graduated from the Grady College of Journalism and Mass Communication. Zack Brendel BSES ’03 majored in economics in the College of Agricultural and Environmental Sciences.

But both discovered that construction was a fun way to make money after graduation. Occasionally, they’d cross paths, working on the same projects from time to time.

“I think we’re both visually capable, and that’s a pretty important part of construction,” says Malec. “And it’s pretty cool to be able to take a stack of lumber and turn it
into something.”

After working on various crews for a few years, each broke off to establish their own respective companies. Malec’s Timberlane Construction focuses on residential work, while Brendel’s Oneta Woodworks began as a custom furniture business and grew into craft woodworking.

“It’s kind of funny thinking back now that we both started our businesses like right there in 2008-ish when the economy was tanking,” Brendel says. “Other construction companies that looked a lot like ours today were falling left and right. But because we were young, pretty dumb, and nimble, it made us kind of valuable.”

Business was good, and the two kept finding projects where collaborating made sense.

In 2016, they formalized their partnership. The duo co-founded Character Built, an Athens-based construction and design group that does everything from new construction to historic restoration. They started off doing everything themselves, but now partner with local interior designers and architects to bring commercial visions to life.

The pair share a passion for Athens and particularly enjoy working with local clients on projects they think will benefit the community. “Sometimes, selfishly, I just want to see a building that’s been downtown abandoned for 40 years or something fixed,” Brendel says.

They did just that with an old building on East Washington Street, once the Lamar Lewis Shoe Store. Now Tweed Recording and Audio Production School, the space needed revitalization. And Character Built was up to the challenge.

“I didn’t really understand the history of that building that had been sitting downtown, largely underutilized and underappreciated,” Malec says. Working with owner and CEO Andrew Ratcliffe, Character Built created more than just a recording studio. They created a space for people to learn the ins and outs of the music business, from recording to engineering to performing.

“These old buildings, specifically downtown and in these historic buildings that look kind of terrifying, the bones are there,” Brendel says. “The construction methods, 100 to 150 years ago, are far superior to what they are today. They’re easier to fix. They’re worth fixing.”