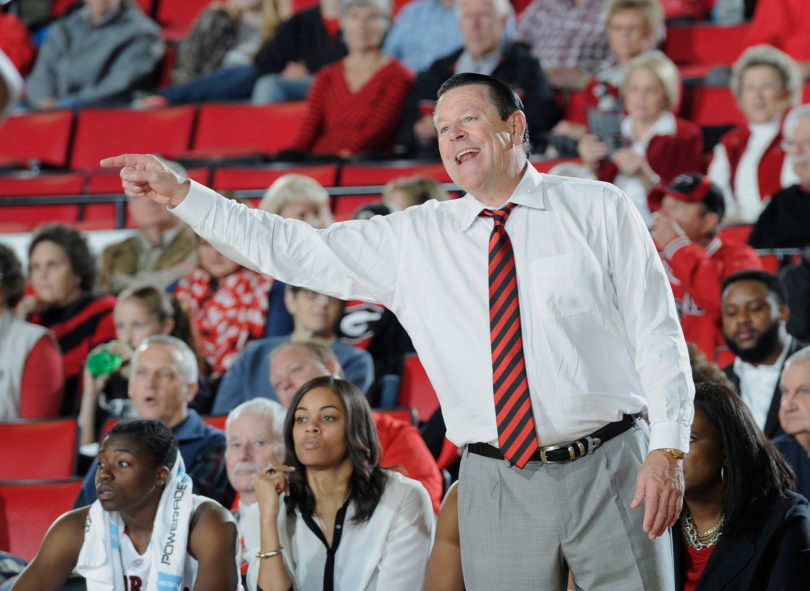 Andy Landers’ career at UGA began with a dream.

“In the beginning, there was a dream to create a program that would compete at the highest level,” Landers said. “And we’ve done that.”

“Andy has led our women’s basketball team on an incredible journey for 36 years,” said Greg McGarity, the J. Reid Parker Director of Athletics. “He has poured his heart and soul into our program.”

The players Landers has coached have not only excelled on the basketball court, they have excelled in the classroom as well.

“I am very appreciative of the many contributions Andy has made to the University of Georgia,” said UGA President Jere W. Morehead. “Aside from his remarkable achievements in athletic competition, I am especially thankful for the importance he has placed on the academic achievement of our student-athletes.”

That emphasis on academic success has led to an impressive stat that not many coaches can claim at the end of their careers. When seniors Krista Donald and Erika Ford receive their degrees in May, all 67 four-year letter winners under Landers will have earned degrees from UGA.

“I came to UGA for him and because of his legacy,” Donald said. “It’s been great playing for Coach Landers. He’s the type of coach you cherish.”

Landers’ goal to make the women’s basketball program a national powerhouse was realized when he coached the 1985 team to a second-place finish in the NCAA tournament.

And subsequent teams enjoyed success that led to numerous national honors for individual team members and for Landers, who was elected to the Women’s Basketball Hall of Fame in 2007.

Many of Landers’ players have pursued successful careers as professional basketball players. To date, 38 of them have played for pro teams in the U.S., Europe, Asia and South America.

Landers coached at Roane State Community College in Harriman, Tennessee, for four seasons before he was named head coach of women’s basketball at UGA. One of the lessons he said he has learned in his 40 seasons as a collegiate head coach is that some things never change.

“As long as people—whether its players, coaches, administrators—know that you care, they’ll do you ­anything for you,” Landers said. “And the more you care, the more they care back. I hope that every coach in the country has experienced or is experiencing what we have experienced at Georgia.”

Former players express a similar sentiment about Landers when they talk their “Georgia experience.”

“You don’t think about this when you’re playing, but he’s bigger than the game,” said Teresa Edwards, a five-time Olympian who was coached by Landers from 1982-1986. “Only he could take some many different people from so many different backgrounds and mold us into a team.

“I couldn’t have been half the player I was without what Andy Landers did for me at Georgia,” she added. “I love the man. He’s a great guy.”

And lessons learned from Landers have carried into some former players’ adult lives.

“Aside from my parents, I don’t know that there’s a more influential person in my life in a positive way than Coach Landers,” said Angie Ball Watson, who played at UGA from 1996-2000 and was team captain from 1999-2000. “He helped instill in me the mental toughness that I have today as a mom and a wife.”

Landers is not sure about the next leg of his life’s journey.

“I haven’t crossed that road, yet,” he said. “My yard will probably look better than anybody else’s in the neighborhood—at least until I get bored with it. We’ll just figure it out as we go.”