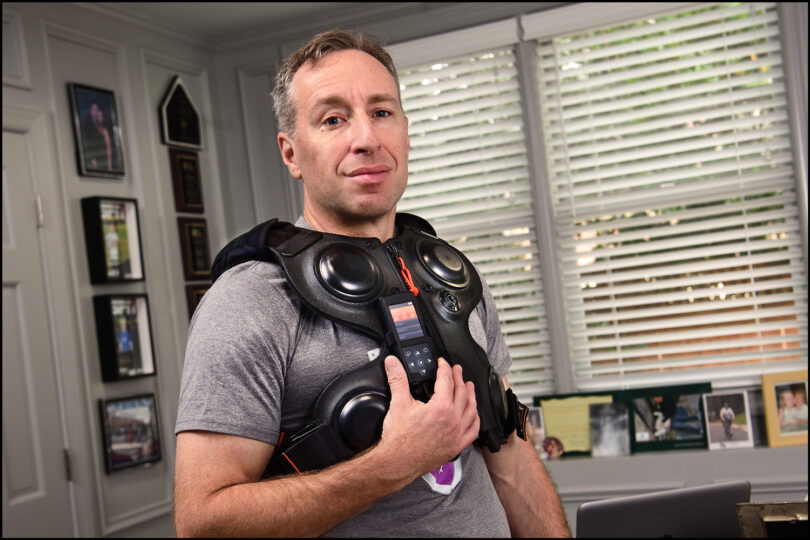 Andy Lipman BBA '96 was born with cystic fibrosis. Throughout his life, he's had to wear vests like the one pictured here to help clear his lungs of the mucus that would clog them without it. At the time Lipman learned about the disease, people with CF rarely lived past 25. In September, he celebrated his 47th birthday. He is a husband, father, athlete, philanthropist, motivational speaker, and the author of four books. (Photo courtesy of Andy Lipman)

Andy Lipman was born a warrior.

Actually, that’s not quite accurate. But he did learn at a very young age that he needed to become one if he wanted to live past his 20s.

Lipman BBA ’96 was in elementary school when he learned that cystic fibrosis, the disease with which he was born, was supposed to lead to an early death. CF is a genetic disease that causes the body to produce excess mucus in the lungs. It is the No. 1 genetic killer of children and at the time Lipman learned about the disease, people with CF rarely lived past 25. Even today the median age of survival is just 37.5 years.

Lipman turned 47 in September and is on the emeritus board for the Terry College of Business. He is a husband, father, philanthropist, author, athlete, advocate, motivational speaker, and most definitely a CF warrior. 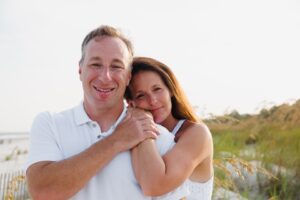 Still, looking back two-plus decades, that wasn’t always the case. When it was time for Lipman to go off to college, he was wary. “I knew that I didn’t want to go too far away,” says the Dunwoody native. “How was I going to do it?”

Lipman admits that his UGA experience wasn’t all positive, yet he credits his time in Athens for changing and, quite possibly, saving his life. During his first two years on campus, Lipman frequently wore a plastic vest that was hooked to a loud machine, both of which helped clear out his lungs. Needless to say, his social life suffered and, eventually, so did his academic one. Lipman sunk into a depression and eventually landed on academic probation. Physically, he’d lost so much weight that he wasn’t much more than skin and bones. He stopped his treatments and even quit taking his meds.

During his junior year, on one of the few occasions he left his room, Lipman hung around the basketball court outside his fraternity house. The players needed one more, so he joined in. Almost as soon as he started, Lipman got knocked to the concrete. A bad joke about his scrawny physique followed.

That was a turning point in Lipman’s life.

“I ran into the house, looked in the mirror and started making a list of the things I wanted to accomplish,” Lipman says. And the warrior emerged.

One of those was taking a weightlifting class. He eventually gained more than 20 pounds of muscle. And he’s stayed active too. Lipman ran his first Peachtree in 1997 and has done so every year since, including this year’s virtual one. He runs a few miles and works out with weights 40 minutes a day and has completed a triathlon.

One of Lipman’s most memorable runs came in 2001, when he carried the Olympic Torch down Lumpkin Street on its way to the 2002 Winter games in Salt Lake City. His route took him past that old fraternity house, where he was knocked on his behind.

But Lipman’s battle against CF is more than personal. Through his family’s Wish for Wendy Foundation (named for his older sister who died from CF when she was just 16 days old), Lipman, along with his family and friends, has contributed more than $4.5 million to the fight against CF.

Lipman wrote his first book when he was 25—complete with forewords by the likes of Chipper Jones and Celine Dion. In 2019, he released his fourth book, The CF Warrior Project: 65 Stories of Triumph against Cystic Fibrosis.

“I’ve previously written a lot about myself,” says Lipman, a prolific blogger in addition to author. “But in the past few years I’ve been reading social media

posts by other people chronicling their fight against CF. My wife, Andrea, encouraged me to write a book about that, and over time hundreds of people had submitted their stories.” 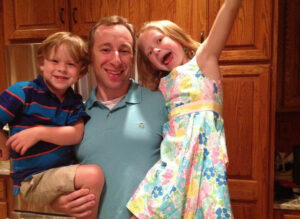 He narrowed them down to 65 because of the “65 Roses” term that a young child with CF famously used to pronounce the name of the disease. Book five will pick up where that leaves off.

Even with all that, Lipman says one of his proudest accomplishments remains his family—he and Andrea have a daughter Avery and a son Ethan, and neither has CF.

Lipman says that he will continue to advocate for warriors like himself in the cystic fibrosis community until the day when CF finally stands for Cure Found.