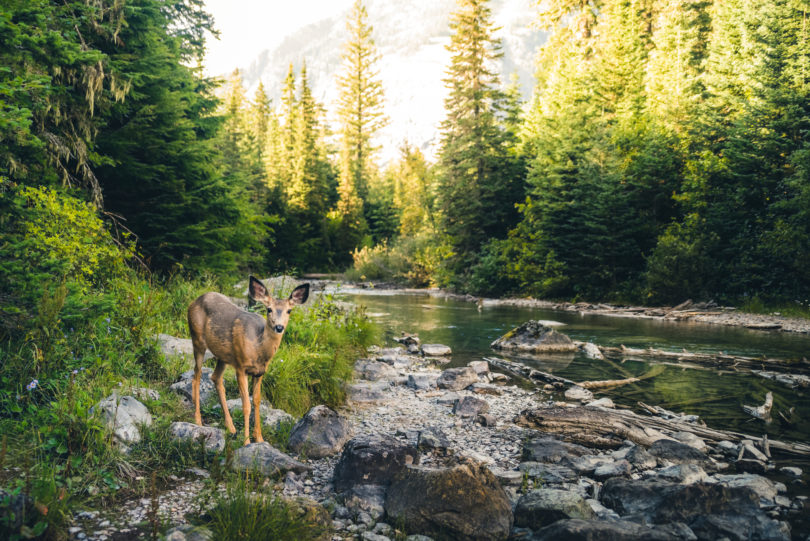 Research suggests that current models of freshwater ecosystems are incomplete

Hundreds of years ago, when the number of animals roaming North America was much higher than it is today, decomposing animal carcasses may have played a substantial role in adding nutrients to the continent’s rivers and streams. According to research from the University of Georgia River Basin Center, recently published in Food Webs, their contribution may have been great enough that current models of freshwater ecosystems are incomplete.

The paper was inspired by a 2017 Yale University study by Amanda Subalusky and colleagues, which found that mass drownings of migrating Serengeti wildebeest contributed the equivalent of 10 blue whale carcasses per year into the Mara River. UGA ecologists Seth Wenger and Mary Freeman wondered whether something similar could once have happened in North American rivers, and they collaborated with Subalusky on a study to find out.

North America once had vast herds of large mammals that may have rivaled those of the Serengeti. In addition, North American rivers once had much larger populations of mussels and turtles than they do today, and their decomposing shells could have been an important source of nutrients.

Freeman, a research ecologist with the USGS Patuxent Wildlife Research Center and UGA’s Odum School of Ecology, pointed to accounts of thousands of alligator snapping turtles being harvested out of Georgia’s Flint River from the 1960s through 1980s for, among other things, turtle soup.

“Every one of those turtles has a big shell,” Freeman said. “So, was it once the case that the beds of these rivers were littered with big turtle shells? What else could we be missing and what implications could that have on nutrient cycling?”

A range of sources

To establish estimates for populations of animals that existed hundreds of years ago, the team used sources ranging from harvesting records to anecdotal accounts of mass drownings during migrations.

They then calculated the biomass of the animals prior to death, the biomass of their bones, and the nutrients that would have been distributed from their carcasses into the water. They compared these nutrient concentrations to background nutrient levels in North American rivers.

They conducted case studies of several different species, encompassing both small aquatic animals that would have lived in the river and large terrestrial animals that would have occasionally used or crossed it. In the aquatic category, snapping turtles were joined by beavers and freshwater mussels. Beaver populations experienced declines through trapping and removal when Europeans first arrived in North America; mussels were also the victims of commercial use, with many populations unable to survive extensive harvesting for decorative buttons in the early 1900s.

Wenger, director for science of the UGA River Basin Center and an assistant professor in the Odum School, was surprised by the results.

“I thought once we did the math, mussel shells would really matter and turtle shells would be substantial,” said Wenger. “What we found was they matter, but they are relatively small compared to overall nutrient concentrations, except during low flows when you don’t have much water and therefore you don’t have many nutrients.”

But what about nutrient input from migratory terrestrial animals? Migrations of large animals formerly resulted in mass drownings. For bison, anecdotal evidence suggests a single mass drowning in the Assiniboine River in western Canada near the end of the 18th century left more than 7,000 carcasses along the river. Those carcasses contributed 43 tons of phosphorus, which was the equivalent of 50 percent of the river’s annual phosphorus load. And other historical accounts indicate that thousands of caribou from the George River herd drowned every year in Canada, potentially contributing 4.2 tons of phosphorus to river systems annually.

“Because they were episodically delivered in large quantities in some rivers at some times, they could have been a very big part of the nutrient fluxes,” said Wenger.

So if animal carcasses can be an important component of river and stream ecosystems, could they perhaps play a role in restoration?

Wenger said in most cases, the answer is probably not—but understanding the impact they had on stream nutrient cycling is still important.

“When we are restoring streams, we are not always trying to replicate a true pre-development system,” he said. “We are trying to make something that is more natural, but also aesthetically pleasing. But what if our targets are wrong because we are missing things across the whole landscape? Then our basic understanding of what a stream should look like is inaccurate.”

If the functional importance of animal remains in rivers and streams could be more accurately quantified, those numbers might reveal new avenues for wildlife restoration and, at the very least, acknowledge the true significance of the missing dead.

Support for the study was provided by the National Science Foundation. The full report, “The missing dead: The lost role of animal remains in nutrient cycling in North American Rivers,” can be found at https://doi.org/10.1016/j.fooweb.2018.e00106.