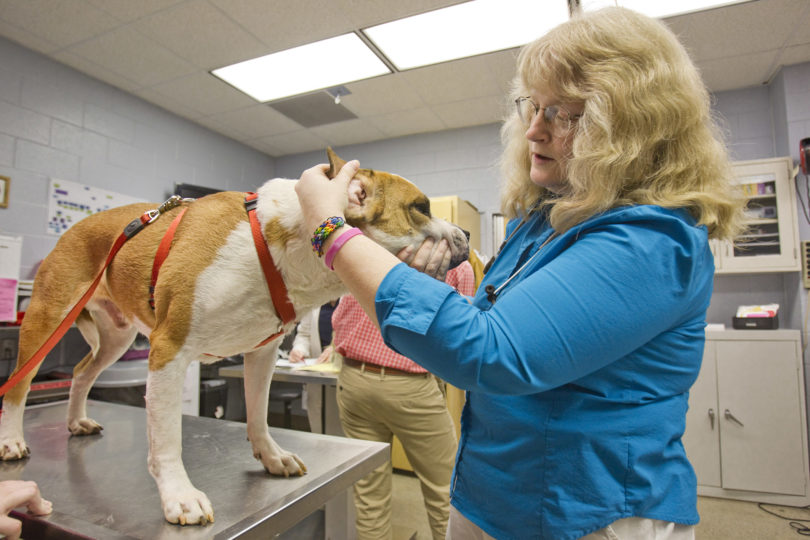 Too much food and too little exercise can lead to obesity in humans—and their pets. Fortunately, understanding how to keep pets at a healthy weight may help humans get fit as well.

Obesity is the most common nutrition-related disorder in small animal medicine, according to Sherry Sanderson, an associate professor of physiology and an expert on animal nutrition at UGA’s College of Veterinary Medicine.

“I think a lot of the risk factors that cause human obesity are the exact same risk factors that we see for pet obesity,” said Sanderson, who is a member of both UGA’s One Health program and its Obesity Initiative. “As our lifestyles become busier, a lot of us become more sedate, and we don’t exercise as much as we used to. Food is often very easy to get.”

Sanderson has created weight loss plans that focus on exercise and diet for several overweight pets. One of her plans helped Waters, an overweight pit bull who was brought to Sanderson after being hit by a car.

One of Waters’ back legs had been injured, making it hard for him to walk normally. The injury was exacerbated by Waters’ extra weight, and he had to take regular medication for the condition. Sanderson encouraged his owner to walk him more and prescribed a therapeutic diet—a dog food formulated to provide enough nutrients but limited calories.

Waters dropped nearly 14 pounds in less than a year and moved from being classified as “obese” to “ideal” on a scale that assesses amount of body fat. Losing weight also allowed him to stop taking his prescribed medication.

A healthy weight not only can improve existing medical conditions but also prevent future complications in animals as well as humans.

“We’re being proactive in trying to address the weight problem,” Sanderson said. “This is a young dog; we don’t want him to have a lifetime of chronic health problems.”

Though his body condition score is still higher than ideal, Bennie also has dropped 14 pounds in the past year.

“No matter how much we want there to be some magic solution that’s easier than caloric restriction and exercise, that’s usually what we’re coming back to on both the human side and the veterinary side,” Sanderson said.

She thinks exercising with their animals also could help people improve their health. Having a dog in the habit of going for a walk every afternoon might encourage owners to exercise when they are tired after work.

Owners and pets will have the chance to team up during next year’s Walk Georgia program, a fitness program sponsored by UGA Extension. One Health and the Obesity Initiative are collaborating to allow people to track their pets’ workouts as well as their own during the 12-week activity period.

“People will do things for their pets that they will not do for themselves,” said Susan Sanchez, a professor of infectious diseases in the College of Veterinary Medicine who heads the One Health program. “We think that trying to help their pets lose weight might encourage people to walk and get healthier themselves.”