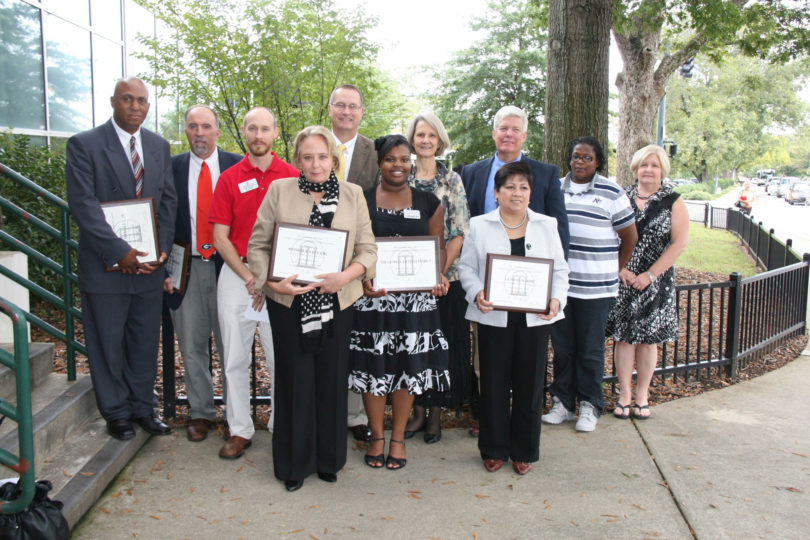 Recipients of the 2012 D.W. Brooks Awards include (front row from left) Monique Leclerc

The College of Agricultural and Environmental Sciences has recognized staff and faculty who have demonstrated excellence in the its teaching, research and extension missions with the annual D.W. Brooks Awards.

“Each year we are reminded just how outstanding the faculty in our college are when we review these award nominations,” said J. Scott Angle, dean of the college. “That excellence is clear across all missions of our college, exemplifying the commitment and innovative spirit D.W. Brooks brought to this college and to agriculture.”

This year’s award winners were honored at a ceremony on Oct. 2 at the Georgia Center for Continuing Education.

Traditionally, the awards ceremony is held in conjunction with the college’s D.W. Brooks Lecture, but this year the lecture will be held separately on Nov. 8 and will be given by Daniel Hillel, the 2012 World Food Prize Laureate.

Hillel developed and championed highly efficient irrigation technologies that allowed farms to flourish across Africa, Asia and the Middle East. In 2012 the World Food Prize Foundation recognized him for his contributions to sustainable irrigation practices and global food security.

This year’s D.W. Brooks Award for Excellence winners are:

James Epperson, a professor of agricultural economics, who received the Brooks Award in Teaching.

Albert K. Culbreath, a professor of plant pathology at the college’s Tifton campus, who received the Brooks Award for Excellence in Research.

Robert Kemerait Jr., an associate professor of plant pathology at the college’s Tifton campus, who received the Brooks Award for Excellence in Extension.

Unessee Hargett Jr., who serves as a research coordinator for the plant -pathology department at the college’s Tifton campus, received the Brooks Diversity Award for Staff.

The VISTA Program received the Brooks Unit Award for Diversity. The Volunteers In Service To America program, a grant-funded partnership with the Corporation for National and Community Service, has been a part of Georgia 4-H since July 2010. Through AmeriCorps’ VISTA program, Georgia 4-H recruits college-educated workers from a variety of backgrounds to serve with the program. So far, VISTA volunteers have raised more than $200,000 to help support 4-H programming since 2010. The five current Georgia 4-H VISTA members are: Capri Martinez and Dominique Butler in the state office; Cindy Edwards in Calhoun County; Janelle Jelks in Colquitt County; and Kassie Love in Houston County. Laura Perry Johnson, Southwest district Extension director, and Jeff Buckley, state Extension 4-H specialist, serve as the program’s supervisors.

Pamela Brown, an administrative manager, who received the Brooks Classified Staff Award for Excellence in the administrative or professional category.

Donna Tucker, who has worked in various UGA laboratories since 1977, received the Brooks Classified Staff Award for Excellence in the technical category.

The annual awards are named after D.W. Brooks, who graduated from CAES  in 1922. Brooks founded the agricultural firm Gold Kist, Inc. while serving as a professor of agronomy at the college. He also founded Cotton States Insurance Co.

CAES administrators established the Brooks Faculty Awards in 1981 to recognize outstanding contributions to the college’s teaching mission. In 1983, administrators expanded the awards to include research, extension and county extension programs. An award for international agriculture was added in 1988.