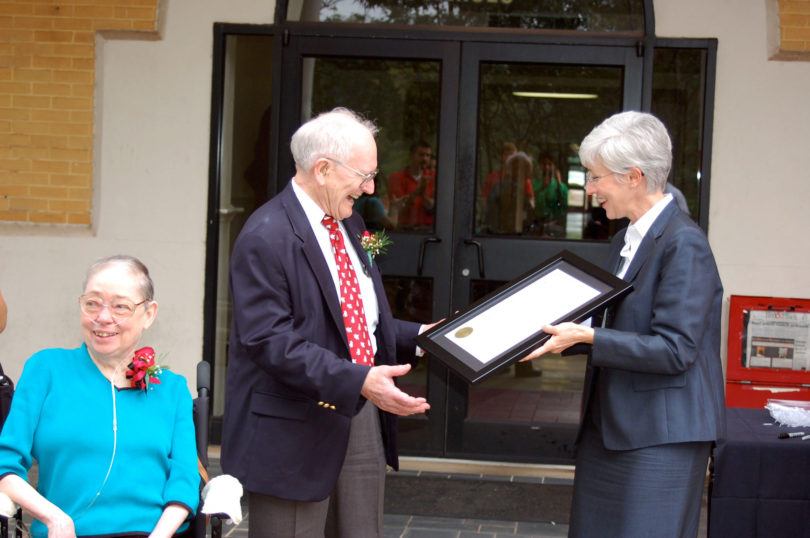 Since joining the faculty of the College of Family and Consumer Sciences more than a decade ago, William P. Flatt has contributed his time, energy and financial resources to it.

In recognition of those contributions, the department of foods and nutrition sponsored “Bill Flatt Appreciation Day” on Oct. 16, including a reception for Flatt and his wife, June, on the front porch of Dawson Hall.

“Bill encourages our faculty, he is a strong supporter of our graduate students and he’s a delight to our undergraduates,” said Rebecca Mullis, head of the foods and nutrition department. “He’s an all-around good spirit.”

Flatt is well known in Dawson Hall for his cheery greetings and his “better than ever” response to anyone asking how he’s doing. Although Flatt attained professor emeritus status several years ago, he is still a favorite lecturer in undergraduate nutrition classes, where he highlights his own successful weight-loss efforts. Flatt reinforces his lecture by having students try on a 20-pound “fat suit.” He also “Dances with the Oldies” for the students—demonstrating as he continues his rapid-fire talk—how he used the videotape as a part of his weight-loss regime.

Flatt joined FACS after stepping down as dean of the College of Agricultural and Environmental Sciences, a position he held for 13 years. He has been a part of the UGA faculty since 1969 when he was named chair of the animal science division. In addition to his many other contributions to the college, Flatt and his wife also have  been generous in their financial support of FACS. In August, they established the Bill and June Nesbitt Flatt Professorship in Foods and Nutrition. The Flatts also have established scholarship endowments for undergraduate and graduate students. A fourth endowment supports first honor graduates and Gamma Sigma Delta outstanding senior award recipients.