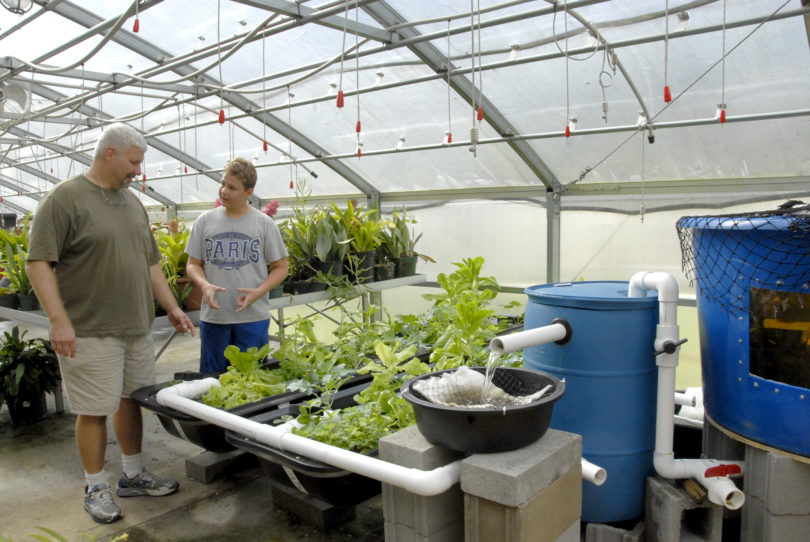 Athens, Ga. – Robby Ratajczak was looking for a Boy Scouts’ project this past summer and didn’t have to look far for inspiration: His dad’s aquaponics work at the University of Georgia.

Bob Ratajczak, a research coordinator at UGA, had talked to Robby a lot about the new aquaponics food production systems he’d helped build in UGA’s Whitehall Forest and UGArden. The simple yet elegant systems use fish waste to feed plants, which in turn clean the water for the fish.

“I was pretty excited, because Dad is always working with it,” the 13-year-old Ratajczak said. “So I wanted to incorporate it into my Boy Scouts Life Project.”

He did, building an aquaponics system at Hilsman Middle School with the help of his dad, some fellow Boy Scouts and donated equipment and tilapia from the UGA Warnell School of Forestry and Natural Resources. Now the school not only has a unique teaching tool for students, but UGA students from Warnell are developing lesson plans for teachers to use in science and math classes.

It’s an amazing opportunity for the school, said Selena Blankenship, principal of Hilsman Middle School. “The lessons that are developed around it are interdisciplinary, and the kids love it.”

An aquaponics food production system is something researchers at Warnell and the College of Agricultural and Environmental Sciences have been experimenting with for several years. Robert Bringolf, Warnell associate professor of fish biology, has overseen design, construction and operation of both of the systems that have been built on campus.

An aquaponics system works like this: Tilapia growing in a tank produce waste into the water. This water flows out of the tank first through a filter to remove solids—uneaten food and feces—and then into gravel-filled grow beds where beneficial bacteria convert the dissolved waste into non-toxic nitrate. Plants in the grow beds then take up the nitrate through their roots. The water, cleaned by the plants, flows out of the beds and gets pumped back to the tilapia tank to continue the cycle.

Bringolf is excited about the possibilities an aquaponics system offers for research into sustainable food production—and how Hilsman Middle can use it to teach students about everything from biology to agriculture to math.

“The deepest levels of learning occur when information is combined with hands-on experience,” he said. “A system like this provides students with a unique and valuable opportunity to connect the theories they learn in the classroom with something tangible—even edible.”

Bringolf also is teaching a First-Year Odyssey Seminar on aquaponics at UGA. His students built a system and are maintaining it in a Warnell lab.

“They’re really into it,” Bringolf said. “Many have expressed interest in building their own systems at home or in community gardens.”

Also, three Warnell students—Kevin Dunn, Kathy Riordan and Alex Van—are working with a professor in the UGA College of Education to develop lesson plans the Hilsman teachers can use with the aquaponics system. Dunn said the lesson plans will encompass multiple Georgia Performance Standards.

“We’re trying to get the kids outside of the classroom and to the aquaponics system to give them some hands-on learning opportunities about what the system is and incorporating it into the lessons we are covering,” Dunn said.

They are already working with science and math teachers on developing lessons specifically for the middle school students, including one that teaches students how to calculate the volume of the fish tank, the average volume of one of the tilapia in the tank and displacement in a large graduated cylinder.

Hilsman Middle is an International Baccalaureate candidate school, Dunn said, so teachers challenge students to “intellectually make connections between what they learn in the classroom to the real world. This includes an interdisciplinary learning approach, and we are trying to fulfill that by combining concepts and scientific instruments between science and math classes.”

Ratajczak said he was thrilled when son Robby was inspired to build a system for one of his Boy Scouts projects. The school secured grant funding just before school started, and he and five fellow Boy Scouts from Troop 22 got to work in August for his Life Project, building the system over four days.

David Berle, faculty adviser for the UGArden and associate professor in the UGA horticulture department, said the aquaponics systems at UGA grew out of a desire for he and Bringolf to teach a section about aquaponics in horticulture’s sustainable food production course, and it expanded from there. Moving the system into a middle school is a way to get kids interested in science and math.

“It’s something different,” Berle said. “There are many things that could be connected to the aquaponics system, so really, it’s a drawing card to get students interested in learning.”

UGA researchers have applied for grant funding to build five more systems in local schools. They have a good chance of expanding the systems to other local Athens schools, Berle said, “and possibly any other schools that have a greenhouse and agriscience program like Hilsman. That is a lot if you look statewide. The system is relatively inexpensive and easy to build, using mostly locally available materials.”

It’s also possible for area residents to have their own aquaponics systems.

“The technology is pretty low-tech, and the cost is not too out of line for a homeowner,” Berle said. “It would be like having a pet or aquarium. It just requires daily attention. But it’s not particularly difficult to start up on a homeowner scale.”

For more information on aquaponics at UGA, see www.facebook.com/UGAquaponics.