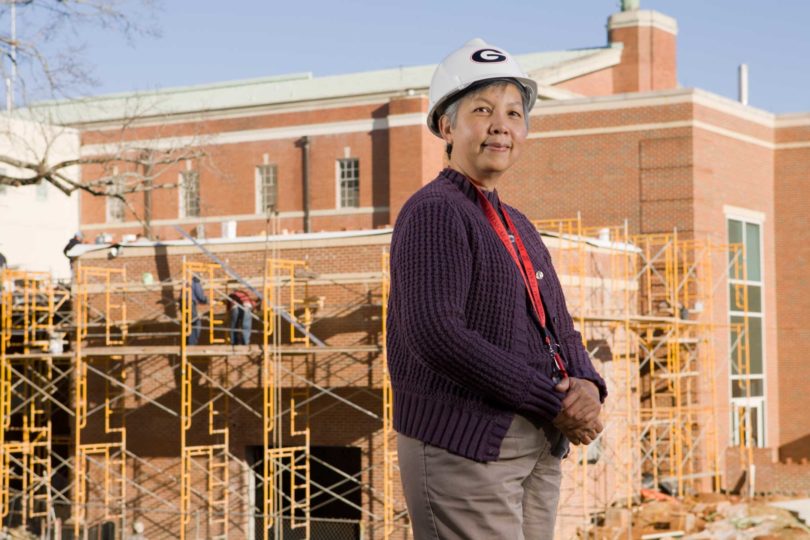 With a tape measure always in hand, Esther Sherman, a project architect in the Physical Plant, makes sure that campus building renovations measure up. But in her personal life, Sherman makes sure that she measures up through extensive volunteer work in the Athens area.

Sherman, who recently received one of four 2008 President’s Fulfilling the Dream Awards for local community service at the fifth annual Freedom Breakfast, teaches Girl Scouts about hammers, power tools and construction. She helps Boy Scouts build bridges and earn their engineering badges. She helps fix up old houses around Athens as part of Hands On Athens, and helps build new ones with Habitat for Humanity. She has done all of this and more while working at UGA, and helping her children through both Boy Scouts and Girl Scouts.

In fact, on last month’s Martin Luther King Jr. holiday, instead of sleeping in, Sherman braved the cold to pull weeds at Brooklyn Cemetery, a historically African-American cemetery.

She’s not the kind of person who volunteers only when asked—she doesn’t even need to be asked. She said she does it because it’s what she feels like she should be doing—giving back to the community that’s done so much for her.

A native of the Philippines, Sherman attributes her willingness to help to the “Bayanihan Spirit,” an attitude of communal unity and cooperation found in her homeland. Roughly translated, it means that more can be accomplished when people work together.

“You can find that in most Filipinos,” she said. “They’re willing to help every time.”

Coupled with her three children’s involvement with scouting service projects, she became even more involved.

She’s enjoyed the experiences, especially being able to use the knowledge she’s acquired working as an architect for the last three decades.

For the past 14 years, she’s been working at UGA. Much of her current job entails designing and making sure renovations conform to the latest accessibility laws, building codes and fire safety laws. In other words, she sees to it that buildings have wide enough doors for wheelchairs and that the fire marshal approves campus projects.

On any given day, she might be found in a hard hat at the College of Veterinary Medicine or Dean Rusk Hall renovation or in her Chicopee office designing renovation plans on her computer.

She came to UGA in 1993, when she moved from the Philippines, where she had been teaching graphics and design courses at the University of the Philippines’ College of Architecture.

In what she calls an “act of faith,” Sherman left the job she loved to come to Athens, Ga.—a place she’d never heard of—simply for the opportunity of coming to the U.S. (One of her cousins had graduated from UGA).

Her first job at UGA was working as a test scorer. After about a month she went to work as a draftsman at Campus Planning (now University Architects for Facilities Planning).

Even though she’d been a practicing architect for about 20 years, Sherman said the move essentially made her start her career anew. She had to retake nine tests to be recertified to practice architecture in the U.S. and even go through an apprenticeship again. Once again, a fully-certified architect, Sherman has replaced teaching in the classroom with teaching her scout troops.

Receiving the Fulfilling the Dream Award was a huge honor for Sherman, who said she became giddy upon hearing the news. She was happiest that someone noticed all that she does.