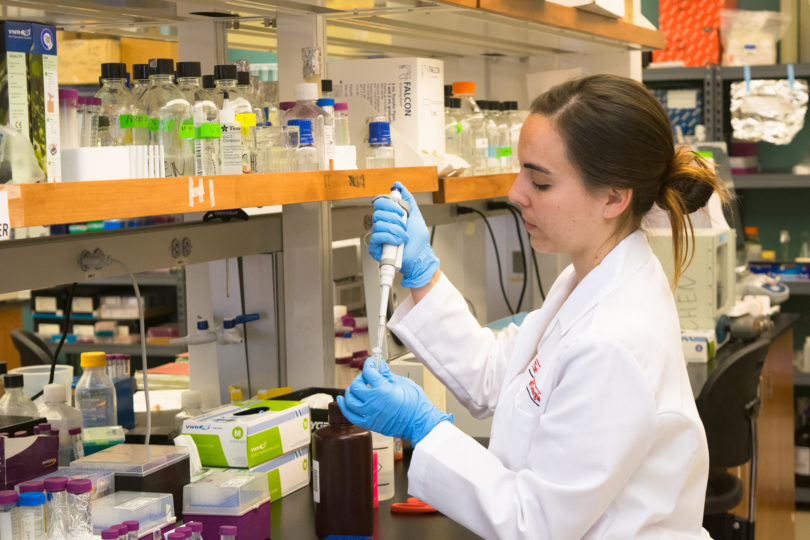 Limited time and money are major obstacles for up-and-coming researchers, said Stephanie Herrlinger, a UGA doctoral candidate in neuroscience. But the ARCS Foundation Award that Herrlinger received last fall eased that burden, allowing her to explore her field and concentrate on her research.

ARCS Foundation is a national, volunteer organization of women dedicated to advancing science through scholarship. The Atlanta chapter, which also awards outstanding students from Emory University, Morehouse College and the Georgia Institute of Technology, began partnering with UGA in 2000 through the Biomedical and Health Sciences Institute.

Since then, 145 awards surpassing $1 million total have been granted to exceptional UGA doctoral students in science and technology disciplines.

“There really isn’t another award like this, and I’m just so excited for some of the things that I’m able to do now,” Herrlinger said of the Global Impacts Award she received, which granted her $25,000 over the next three years.

So far, she has used the money to attend the Society for Neuroscience conference in November, purchase software to organize research data and to enroll in a course on molecular neurodegeneration at the University of Cambridge in England.

Herrlinger is one of 12 UGA graduate students in fields ranging from biochemistry and genetics to ecology and engineering to receive an award this year. She was selected for her leadership skills, academic strength and research on microcephaly, a congenital brain condition that is of high interest in the wake of the Zika virus outbreak.

“I’ve always been really fascinated by the brain; it’s such an interesting organ with such vast complexity,” said Herrlinger. When the question emerged of Zika virus’ connection to microcephaly in infants born to infected mothers, her experience put her in a prime position to conduct a study.