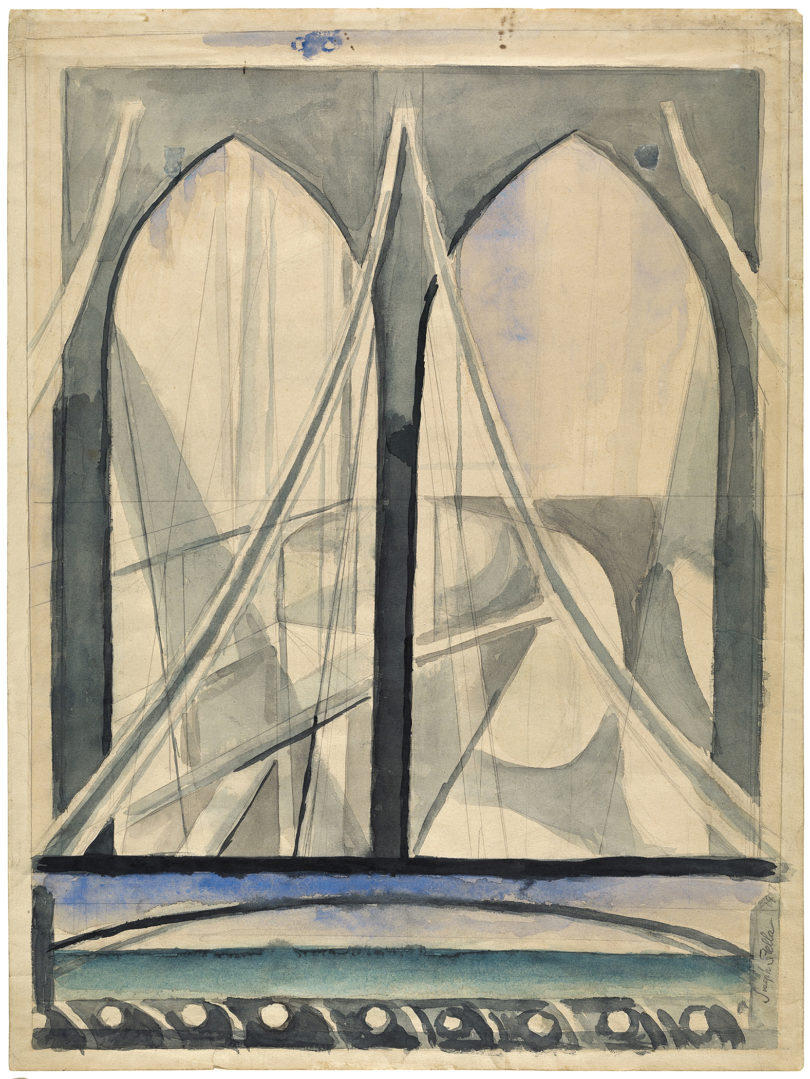 The exhibition Icon of Modernism: Representing the Brooklyn Bridge, 1883-1950 is on display at the Georgia Museum of Art through Dec. 11.

Icon of Modernism includes 40 paintings, watercolors, works on paper and photographs that all take the Brooklyn Bridge as a subject. Sarah Kate Gillespie, the museum’s curator of American art, chose works of art created between the completion of the bridge in 1883 and the mid-20th century to show how artistic representations of it changed over time, even as it symbolized modernity for different generations. From American impressionism to abstract expressionism, the details of how artists presented the bridge changed, but its ability to stand for the modern era remained.

“When it opened, the Brooklyn Bridge was a phenomenon, and many commemorative objects featuring the bridge were produced,” said Gillespie, who was tasked with organizing the exhibition when the museum hired her in 2014. “Other museums have shown the wide variety of these objects, but we decided to focus on the aesthetic portion alone.”

Although it may seem strange for Athens to host an exhibition on a structure so tied to New York City, descendants of John A. Roebling, who designed the bridge, lived in Athens for many years. Portraits of Margaret Allison and Ferdinand William Roebling have been on view in the museum’s permanent collection galleries. In addition, the museum’s collection overlaps strongly with the span of time the exhibition covers; an exhibition of related works from that collection will be on view through Dec. 31 in an adjoining gallery.

Artists with work in Icon of Modernism include painters Joseph Stella, John Marin, Yun Gee, Georgia O’Keeffe and Reginald Marsh and photographers Edward Steichen, Walker Evans, Weegee and Consuelo Kanaga. Four works in the exhibition come from the museum’s own collection, but the remainder are on loan from museums, corporate collections and private collections across the country. An illustrated catalog published by the museum will accompany Icon of Modernism, with scholarly essays by Gillespie; Janice Simon, Meigs Associate Professor of Art History in UGA’s Lamar Dodd School of Art; Meredith Ward and Kimberly Orcutt.

Related events include Student Night on Sept. 29; a film series beginning Oct. 6; a public tour with Gillespie on Oct. 12 at 2 p.m.; a gallery talk by Gillespie and Stephan Durham, an associate professor in the UGA College of Engineering, on Oct. 13 at 5:30 p.m.; the museum’s biennial Emerging Scholars Symposium, co-organized with UGA’s Association of Graduate Art Students, Oct. 21 and 22, with Richard Haw as the keynote speaker on Oct. 21; and Family Day Nov. 5 from 10 a.m. to 1 p.m. as part of UGA’s Spotlight on the Arts festival. Events are open free to the public unless otherwise indicated.

Icon of Modernism is supported in part by an award from the National Endowment for the Arts. Additional support is provided by Shannon and Peter Candler, the Irwin and Hannah Harvey Family Fund, Teddy Johnson, the Piedmont Charitable Foundation, Margaret A. Rolando, the W. Newton Morris Charitable Foundation and the Friends of the Georgia Museum of Art.