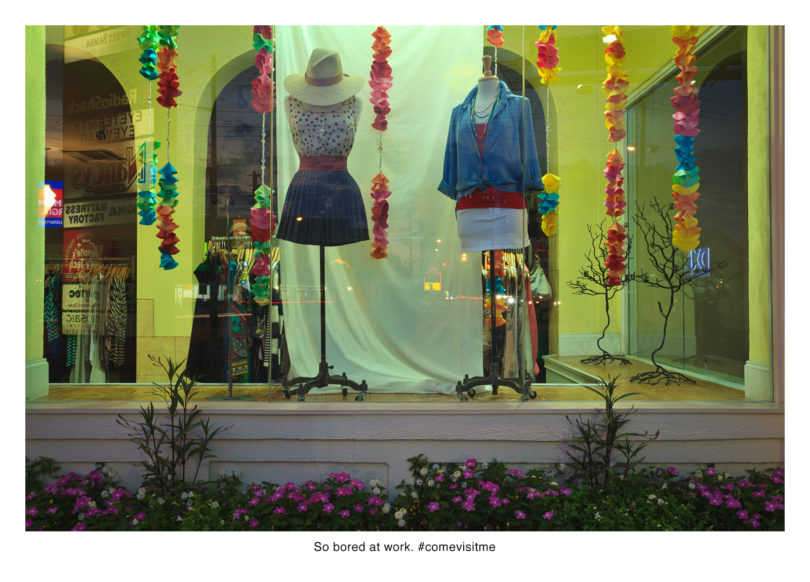 The tweet that prompted this photo for the Geolocation art project by Marni Shindelman and Nate Larson was "So bored at work. #comevisitme".

Athens, Ga. – Geolocation, an art project by University of Georgia photography lecturer Marni Shindelman and Nate Larson of the Maryland Institute College of Art, has gained attention around the world by introducing a new visual art element to social media. The duo uses commercial applications for the iPhone to pinpoint locations of messages sent on Twitter, then they photograph the location.

“We call it the sea of digital noise, the vast amount of virtual chatter that is just floating around,” said Shindelman, a lecturer in the Lamar Dodd School of Art. “But there is something real about it—real people are living lives and these things happen in actual places—and this project lets us in on that a little bit more by linking it with an image.”

After an initial exhibition in 2011, Geolocation had its first New York exhibition in January 2012. Since then it has been the focus of press attention in print and online, including the New York Times, Washington Post, Discover magazine and National Public Radio.

“And then Wired picked us up and the story came out during the Consumer Electronics Show in Las Vegas,” Shindelman said. “Everyone was reading the tech blogs, and this was something kind of different and a story they could pick up on. I guess the stars just aligned.”

Geolocation has been commissioned to create public art installations for the Indianapolis International Airport and the nonprofit arts organization Atlanta Celebrates Photography, for which Shindelman and Larson produced a site-specific series of nine digital billboards and two public transit videos. To create their art, the two mine through thousands of public Twitter messages that have GPS coordinates, travel to those sites and take photographs of the sites where the tweets originate.