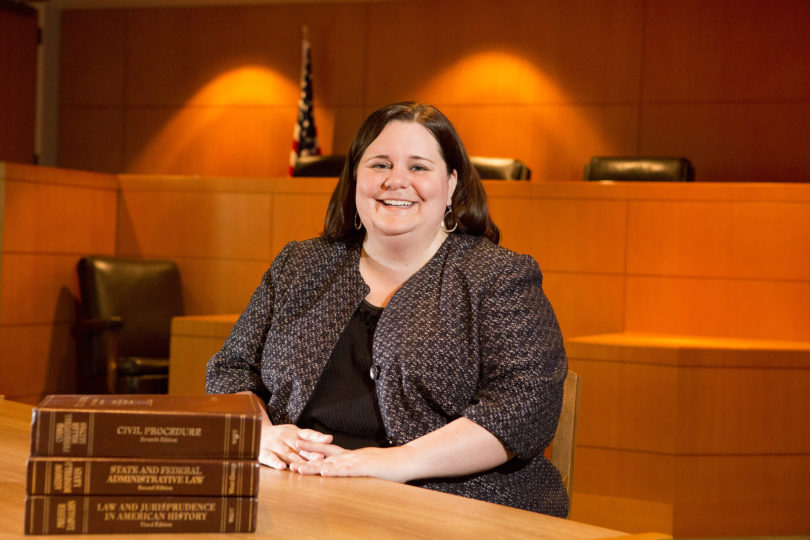 For Christina “Christy” Boyd, interdisciplinary research is the key to success.

With a Juris Doctor and bachelor’s and master’s degrees and a doctorate in political science, Boyd herself creates this foundation.

“One of the things that I am increasingly excited about here at the University of Georgia is developing this interdisciplinary relationship between people at the school who are studying law and courts and related topics,” Boyd said. “It turns out that there are a lot of people in different departments and schools who are studying similar topics.

“There are far more things that we have in common than things we do not,” she also said. “Developing that community and being a part of that community is something that I’m looking forward to.”

Coming to UGA’s School of Public and International Affairs as an assistant professor was the opportunity of a lifetime for Boyd, as she continues her work in the field of American politics and sub-field of law and courts. UGA houses premier faculty in both areas, which allows great possibilities for her work.

Her current research on judicial diversity has received attention from media outlets such as The New York Times, The Washington Post and NPR because of the noteworthy results. Her study examining female and male judges found that the two genders rule on some cases differently.

“You can have two cases that are exactly the same, decided by these two judges who are exactly the same—same ideology, same background—except that one is a male and one is a female,” Boyd said. “The female judge will be more likely to rule in favor of the party claiming that she has been the victim of sex discrimination than the male judge—pretty substantially.”

According to Boyd, female judges will affect appellate court decisions. The female brings experience and background to the decision-making process that the male judge does not have, especially in cases of sexual discrimination.

“The idea is that judicial identity matters,” she said. “Who you get for a judge in a case will affect how your case comes out.”

The implications on public policy, the political process, lawyers and judges necessitate Boyd’s interdisciplinary approach to fully comprehend the range of effects.

In addition to applying her passion for the courts to her research, one of Boyd’s favorite things about her job is teaching.

“I love the students,” she said. “I had good students at my previous jobs, but I have great students here. They are funny, engaged and hardworking, and I have just been overwhelmed by how wonderful they are.”

For her upper-level classes, she takes learning about the courts to a new level. In these course, her students conduct nomination hearings, give oral arguments to the courts or make campaign videos as a candidate running for office. By creating an interactive environment, Boyd allows her students to live the judicial system as a way to learn.

Boyd’s passion for studying, teaching and examining the law motivates her to find systematic explanations for the legal world.

“I get to study judges, lawyers and the legal process, but I get to do it as a social scientist, so it’s kind of the perfect way to combine the substantive interest with the way of approaching it and doing it as a political scientist,” she said. “Starting my career as somebody who brings (J.D. and doctoral) degrees to the table is something that I think distinguishes me from other people, and it’s something of which I am proud.”